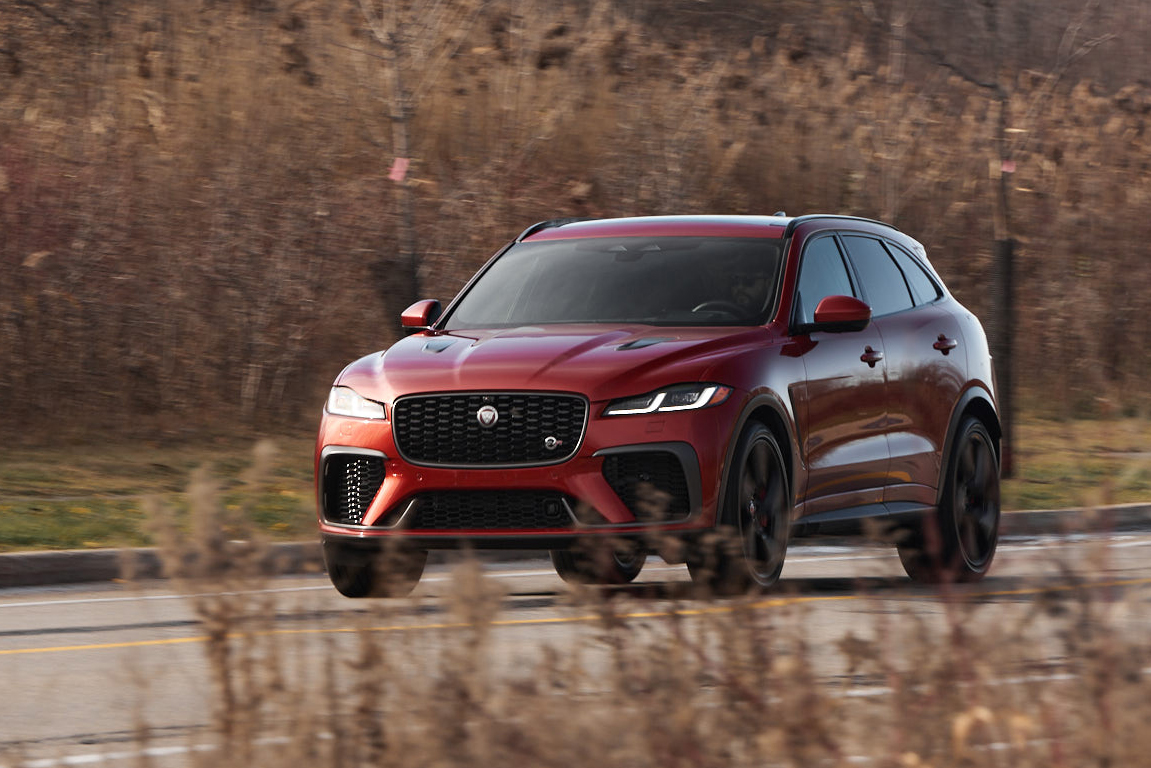 The 2022 Jaguar F-Pace SVR is the vehicle I actually ended up driving during the week I had the Ford Mustang Mach-E GT. If you’ve been following my Instagram, you got the inside scoop on why I quickly got bored with Ford’s high-performance pony and ended up driving this Jaguar instead. No but seriously, for about the same price, would you commit to the all electric Mustang, or this fire-breathing V8-powered Britt instead? I’d get the latter, simply to give all EVs a final fuck you before we’re done with gasoline.

Vehicles like the 2022 Jaguar F-Pace SVR will soon no longer be part of this world, which is why I felt it was appropriate to book one and give it a formal review. I mean, sure, the F-Pace itself will probably soldier on as an EV, and I’m sure Jaguar will find a way to turn its high-performance SVR division into super-fast electric vehicles. But the kickass old-school V8-powered stuff is sadly not long for this world. 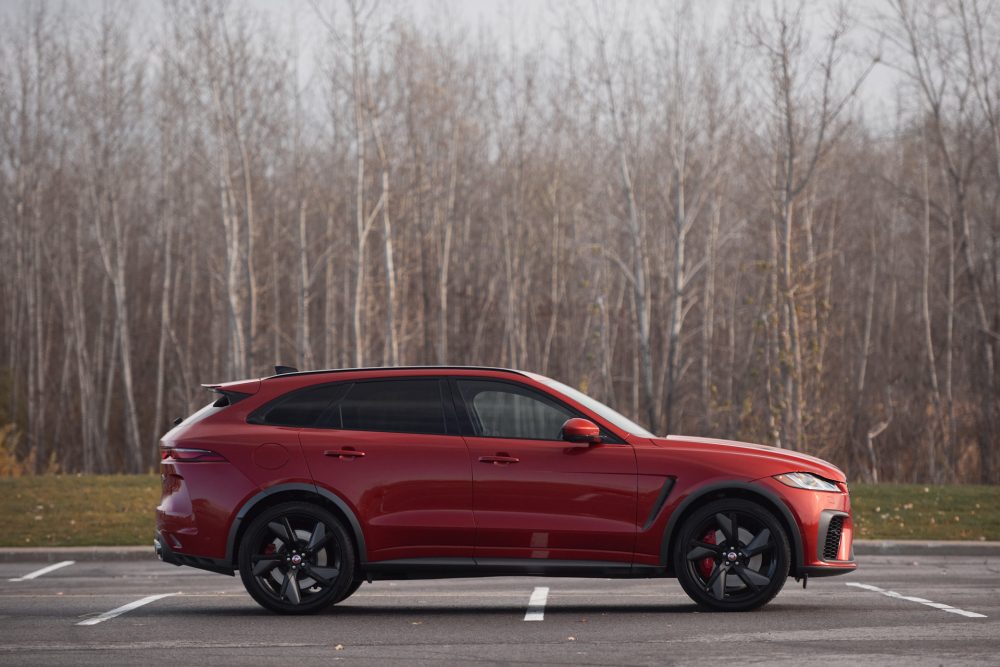 In case you’ve been sleeping underneath a rock all these years, allow me to remind you that the SVR is the F-Pace’s most powerful and expensive version, competing against other high-velocity SUVs like Jeep’s Grand Cherokee Trackhawk (currently on hiatus), Maserati’s Levante Trofeo and BMW’s X5 M. 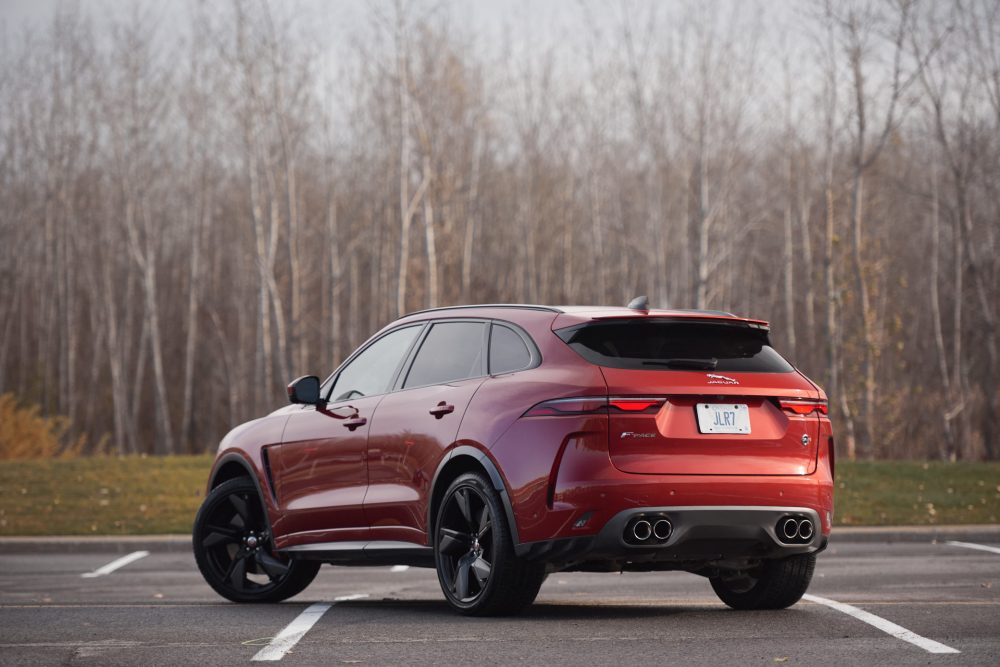 Visually, the SVR maintains the F-Pace’s elegant design intact, but adds a considerably more aggressive front bumper complete with massive air intakes. There are also new propeller-type wheels, which were part of the 2021 facelift, as well as a redesigned rear fascia. It integrates two air evacuation inlets on each side of the car to convey a widebody effect. My personal favorite design element on the SVR are the four massive exhaust pipes out the rear. They reveal why this thing is so special. 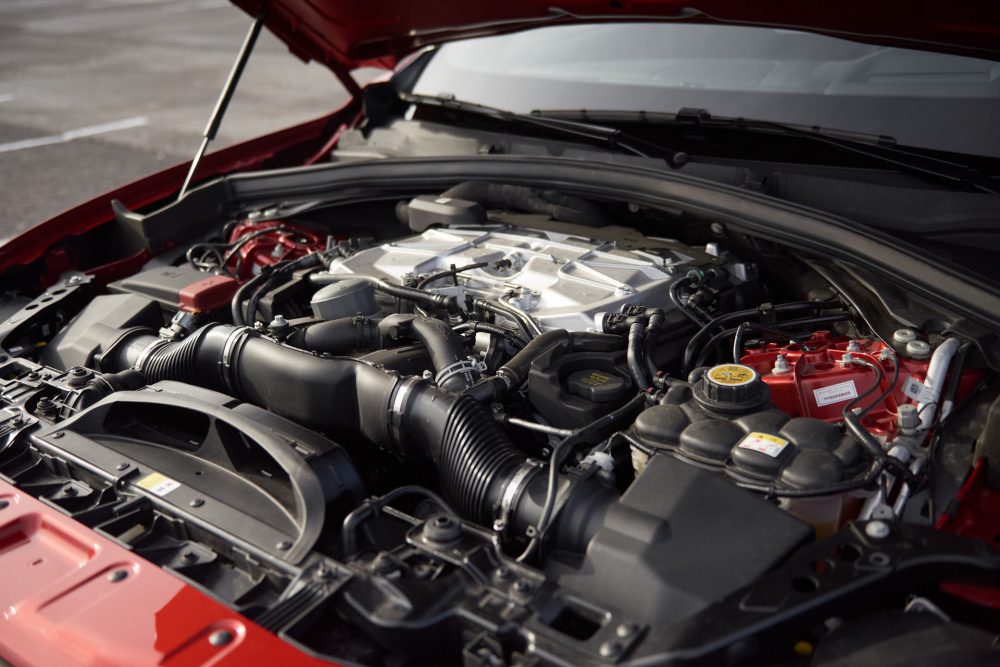 At this point I’d like to mention that I’ve driven several high-performance SUVs in my career, but very few of them have transcended the sense of an event that this Jag conveys. That’s because at the heart of its performance lies a gem of an engine; a supercharged 5.0-liter V8 that churns out a more than appropriate 550 horsepower and 516 lb-ft of torque. That number: 550 from a 5.0-liter V8. That’s so cool. So British. 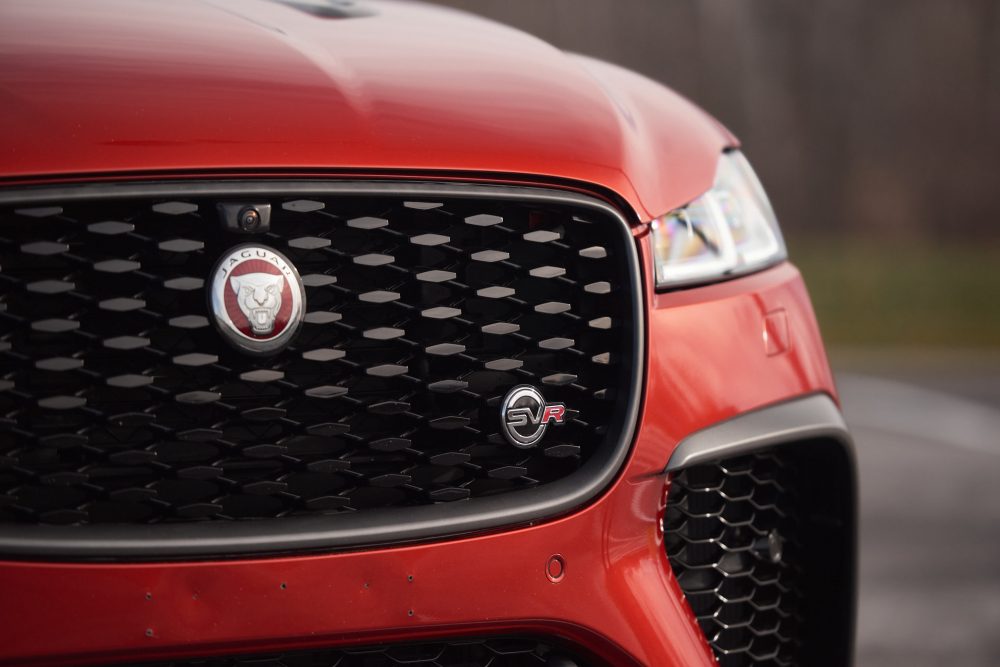 Mated to an eight-speed automatic gearbox and standard all-wheel drive, this longitudinally mounted eight-cylinder allows the SVR to sprint from 0 to 100 km/h in a brisk 3.8 seconds. Now I know what you’re thinking: that the electric Mach-E GT is 0.2 seconds quicker off the line. But that’s not the point. Keep reading.

In case you care – and can afford it – pricing for an SVR kicks off at $98,400 before piling on options. 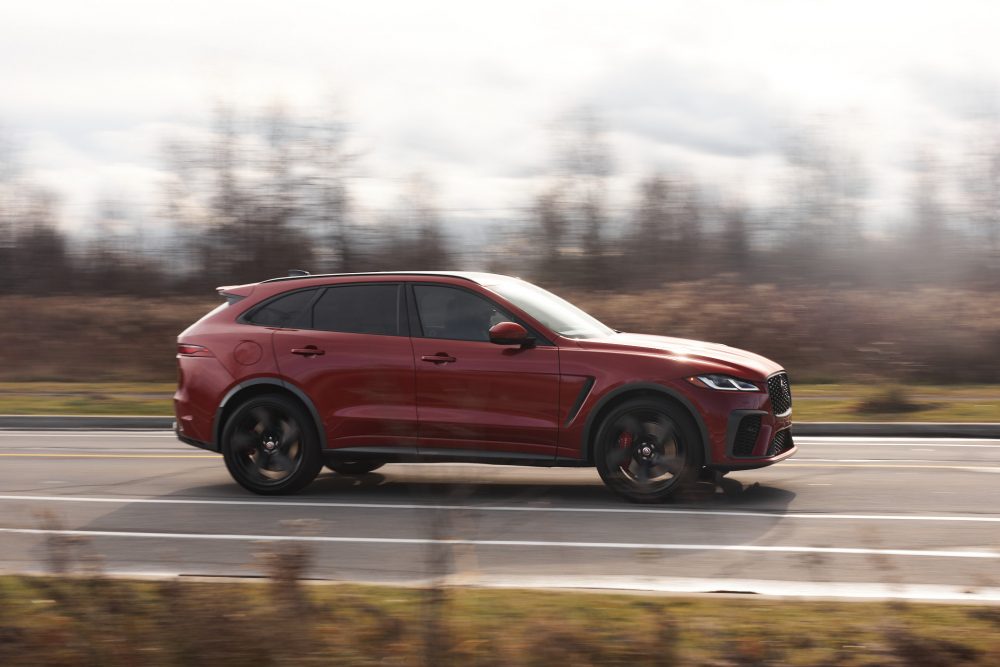 It’s during moments like these that I regret not having filmed a video of the F-Pace SVR, because no matter how much I try to express it in words, I’ll never be able to replicate the sounds that come out of this beast. The SVR doesn’t roar, it screams. It belches, it pops, crackles and burbles. A low speed, it sounds like a drunken hooligan. When going full boil, you’d swear there was some sort of supercar hidden underneath its family friendly body. 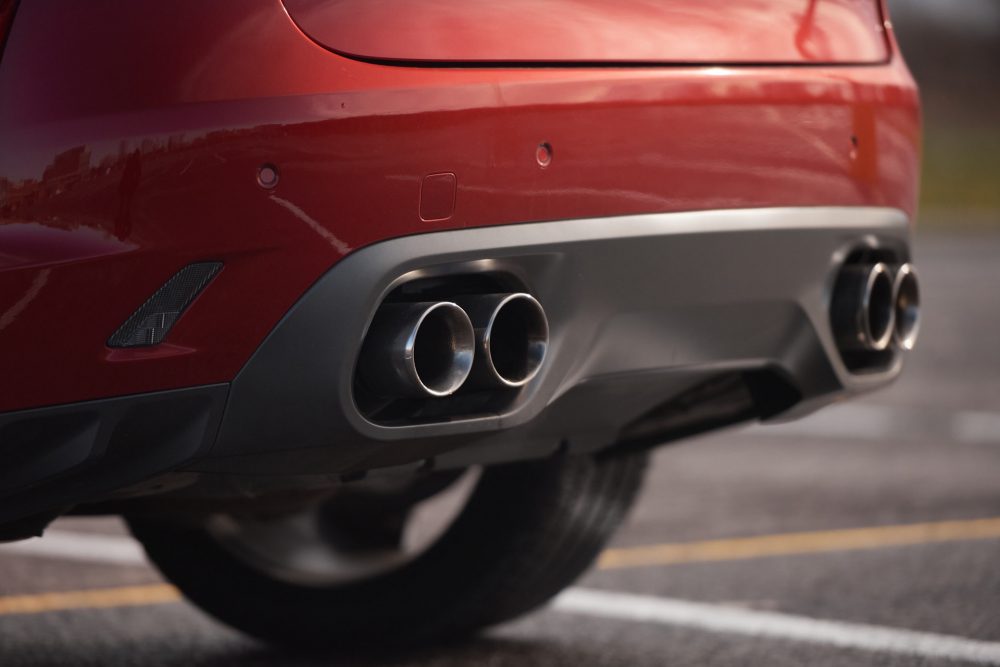 But sound isn’t the only thing the SVR is good at. While it’s true that an X5 M or even a Hellcat will be a tad quicker off the line, this F-Pace impresses the most when it’s hitting a corner. Jaguar calibrated one of the best suspension setups I’ve ever sampled in a sport utility vehicle. The SVR is always soft, meaning you can plow down a country road at full throttle and never really feel the holes and bumps along the way. It envelops you, like a big teddy bear giving you a warm hug. Yet, when gunning the throttle in a corner, it also squats down and generates loads of grip while sending its nose high up in the air. 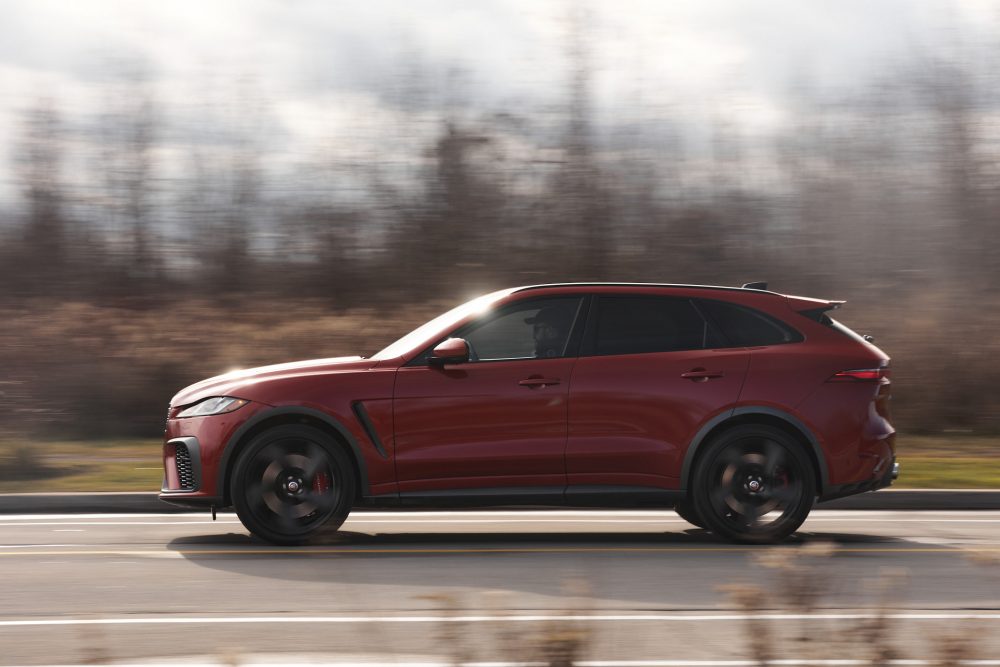 In many ways, this suspension setup reminds me of the one on a professional trophy truck. Ok fine, the SVR can’t hit a jump at 100 km/h and land on its wheels without ripping in half. But the damping here is so good that it always feels soft, but it’s still able to take on a corner at very high speeds. 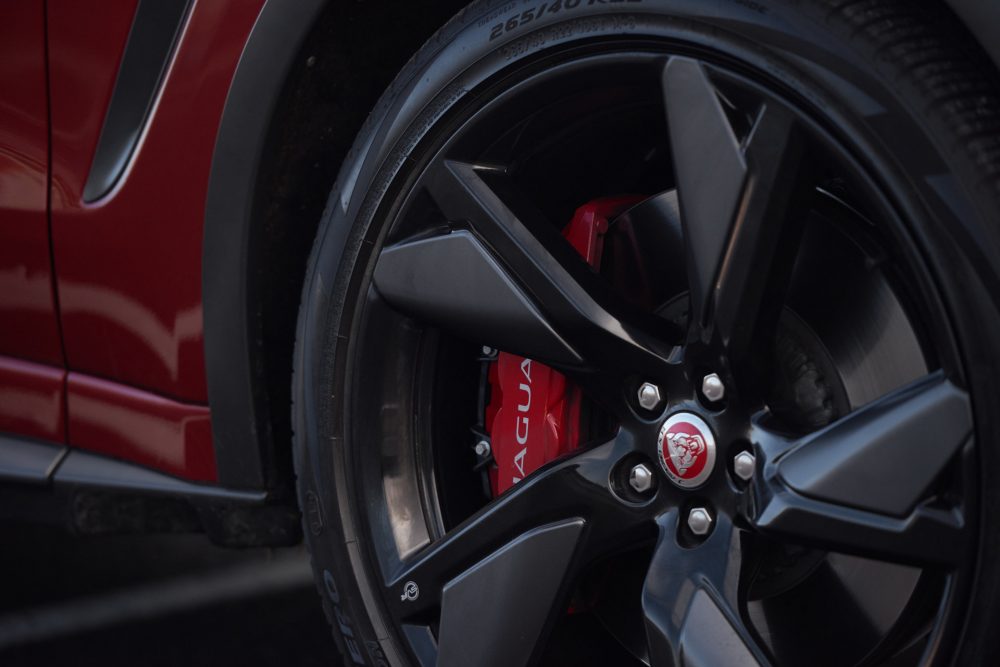 And my god is it fun to drive. Drop a gear or two through the available paddle shifters, and the SVR will belch out a massive BRrraaaap! from its quad exhausts. Gun the throttle and it almost immediately lurches forward with haste as the entire cabin becomes intoxicated with the thunderous decibels of a British-sourced V8 engine. Being supercharged means there’s virtually no lag. That’s refreshing in a world of turbos. 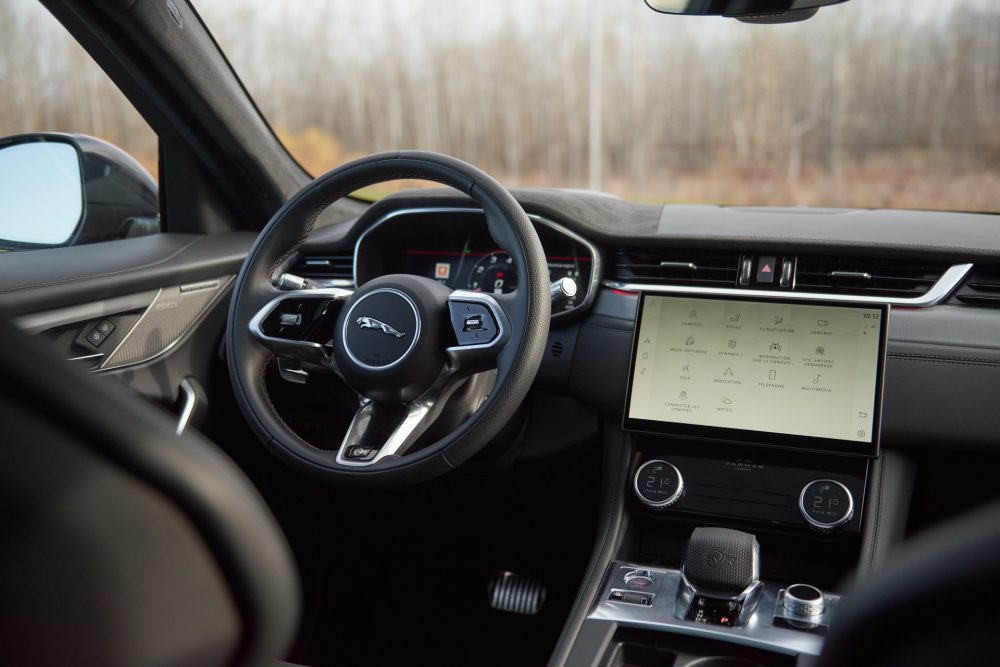 Meanwhile, you and your passengers will sit comfortably in a premium cabin, with rich materials and impeccable build quality. The SVR’s cabin doesn’t do much to show you’re sitting inside something special. There’s black alcantara on the headliner and the dashboard, and some minor touches around the center console, the steering wheel and the shifter, but nothing is ever too loud. The seats are fabulous. They not only look absolutely gorgeous thanks to their slim design, but they actually do a marvelous job of holding your wide ass in check as you attack a corner at near supercars speeds. 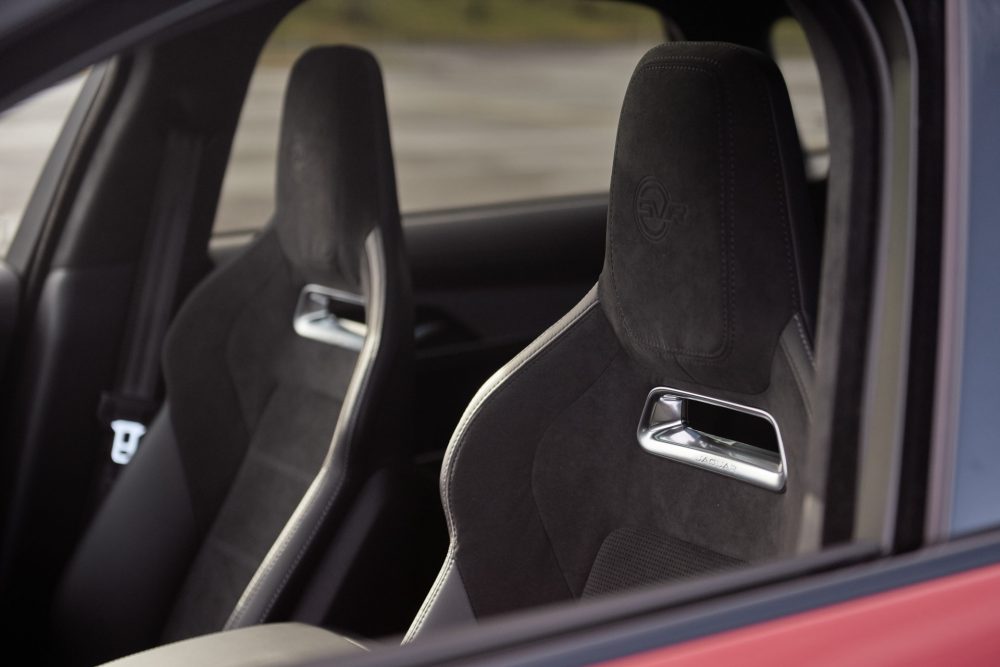 Perhaps where the 2022 Jaguar F-Pace SVR is the most pleasant is during a launch control sequence. Doing so will unleash the engine’s full fury, but will also add a bit of a chainsaw sounds to the experience. When shuffling through the gears, the ZF-sourced transmission – essentially the same as in a Hellcar or pretty much all new BMWs  – spews out a loud GRRaaaaaap! And it does it on every. Single. Gear. It’s the kind of noise that’ll have you giggling inside like a child, one that you’ll comically want to repeat at street corners like the Jag-driving douchebag that you are. 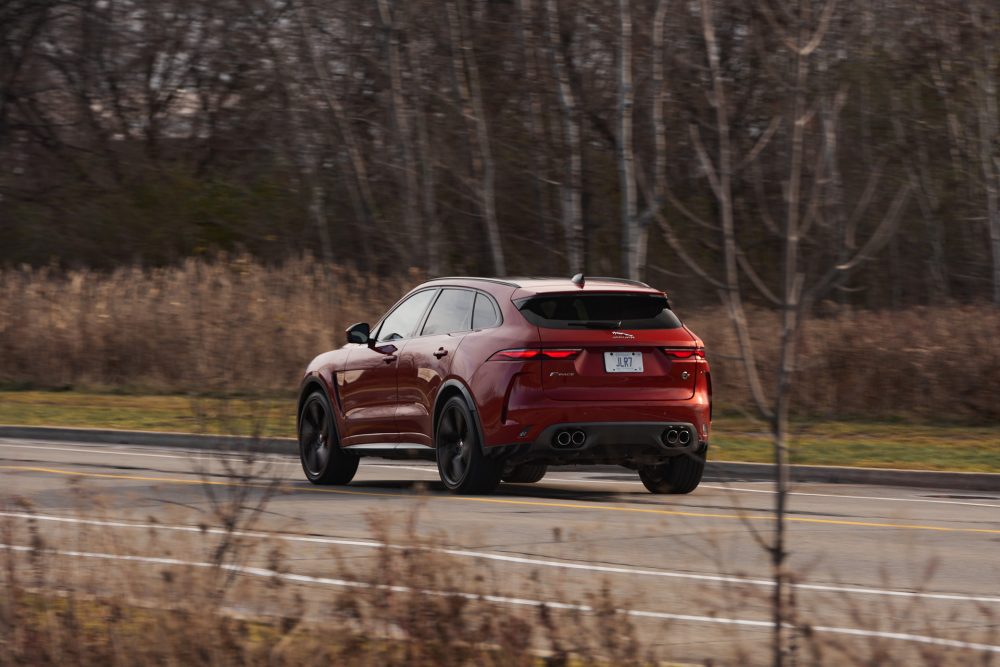 Normally, at this point in the review, I talk about cargo space and how the car manages to accomplish daily boring stuff. But I’m going to skip that since nobody cares. The F-Pace SVR exists only to satisfy the most hardcore automotive fantasies. It’s here to tell all other performance SUVs that it’s the loudest and most badass in the neighborhood. Go ahead, fill up that gas tank with premium fuel priced at $1.70 a liter. Grow a pair of balls why don’t you. Get out there and burn that precious fuel until the last drop. I dare you. Here’s your last chance to make some noise before it all goes to hell. You might as well do it in a Jag.