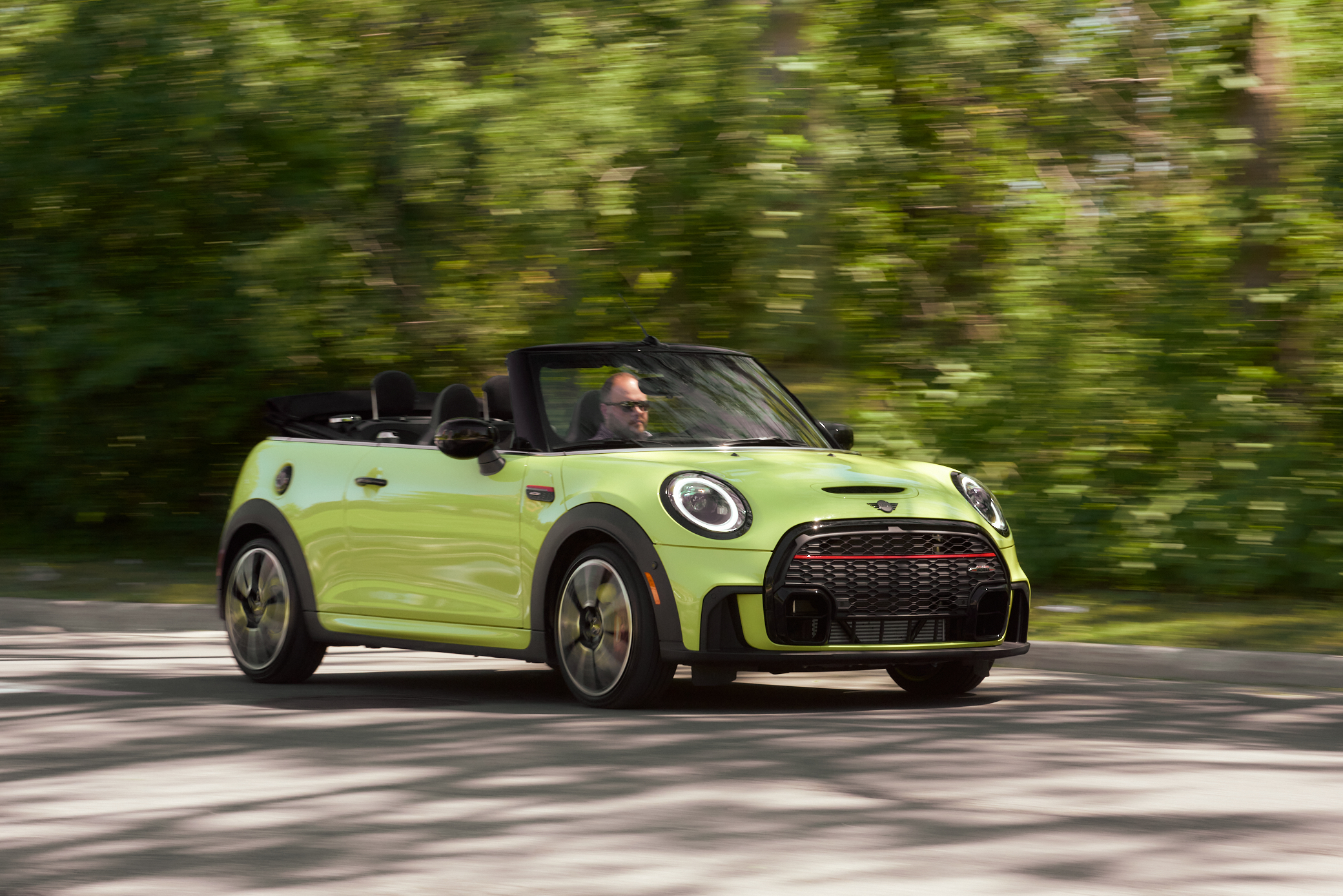 The 2022 MINI John Cooper Works convertible is exactly what you’d expect it to be: the equivalent of an open top roller coaster ride on wheels. And when painted in this Zesty Yellow paint job, it instantly transforms into a charming buddle of sunshine. But while I always have a hoot driving a MINI, I didn’t seem to find the same amount of fun in this as in my classic Cooper R50. Here’s why. 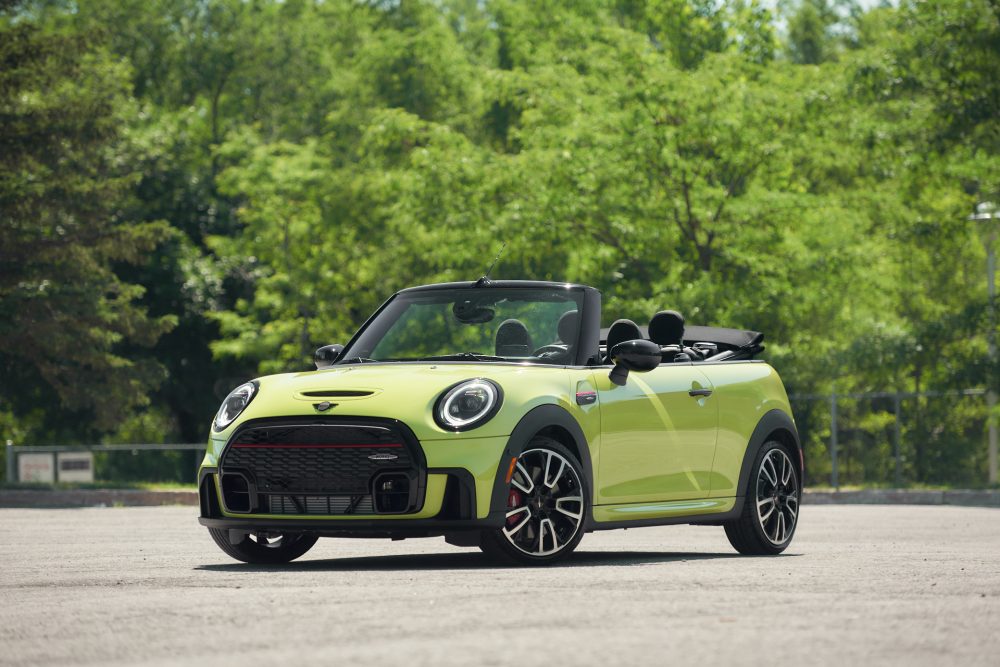 If you’re wondering why this MINI is wearing a mustache, it’s because it’s the facelift model that received a slew of updates for the 2022 model year. Most of it affects the car’s aesthetics, notably the entire front section which now has a much more prominent grille (like all new cars), even more blacked out accents, new headlights and a revised front bumper. Wheels are new, and so is the car’s rear section. The John Cooper Works model, being the most potent MINI on sale, integrates two gigantic air intakes in its grille, as well as new side slits that replace the old fog lamps for improved aerodynamics and brake cooling. 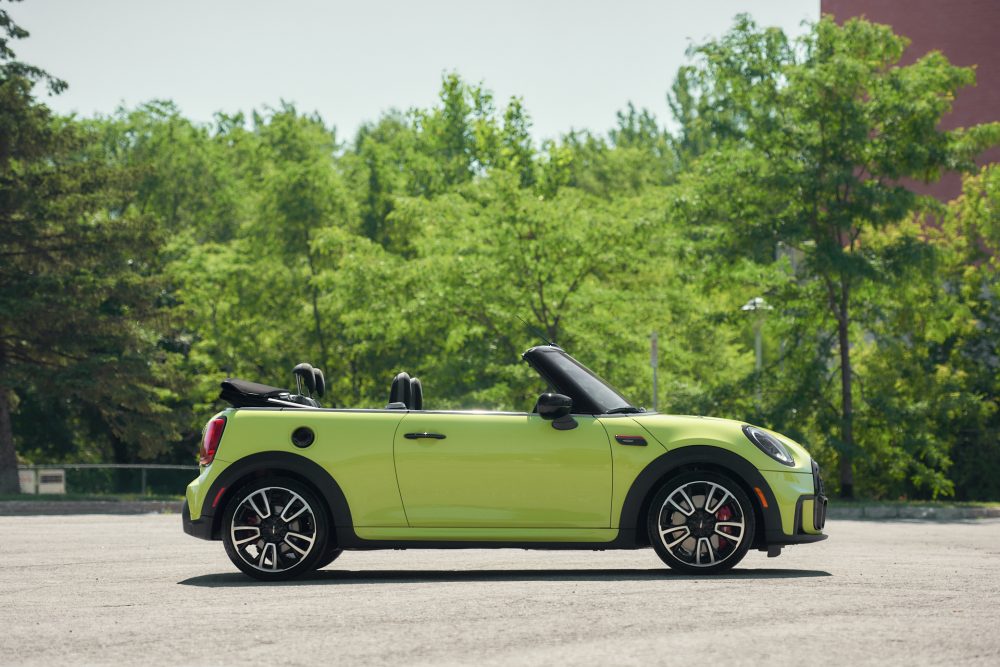 There are some neat design touches too, like the now standard Union Jack motifs in the taillights and some funky light tricks that project MINI logos on the ground at night when opening the doors. The facelift brings with it new flashy paint colors – like this very vibrant shade of radioactive yellow – as well as a reshuffling of the available trim levels and standard equipment. 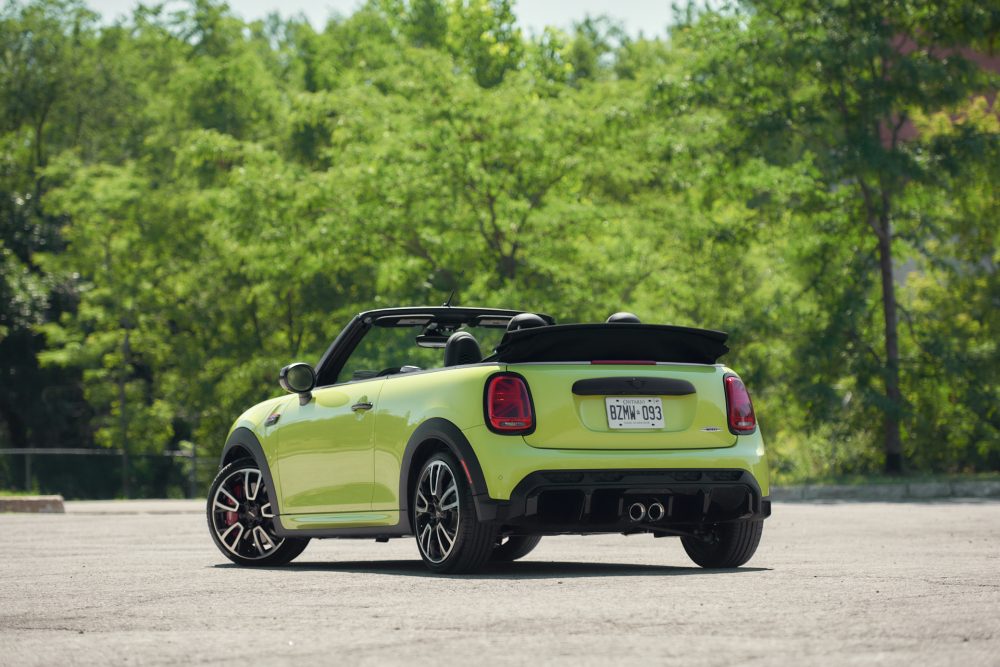 Underneath the new sheetmetal sits the same car as before albeit some subtle suspension changes, engine cooling and steering feel. Still riding on BMW’s UKL architecture, which is shared with vehicles like the new BMW 2-Series, the 2022 MINI John Cooper Works lineup is powered by the same turbocharged 2.0-liter four-cylinder as before. Power is still rated at 228 horsepower and 236 lb-ft of torque. While the hardtop model can be had with a six-speed manual transmission, I’m sad to report that the convertible now only comes with an eight-speed automatic unit. 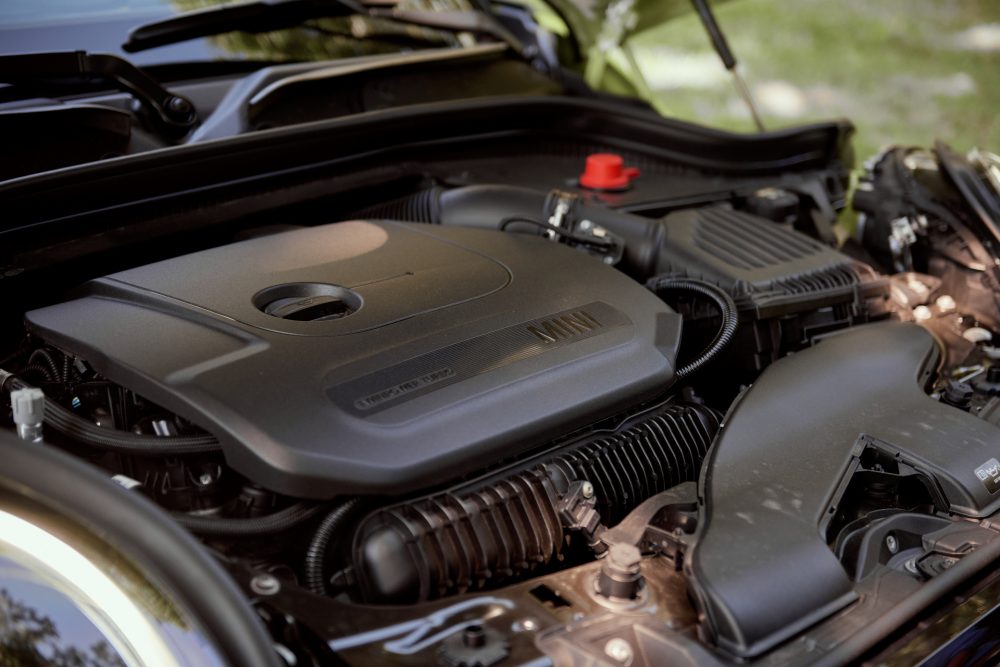 Pricing, in typical MINI fashion, isn’t cheap. A John Cooper Works convertible kicks off at $43,640. My model was stacked to the gills with optional packages like the $7,300 Premier + package and the $2,250 optional Dinamica black leather interior. Final price for the Mountain Dew-flavored MINI you see here was a staggering $56,530. 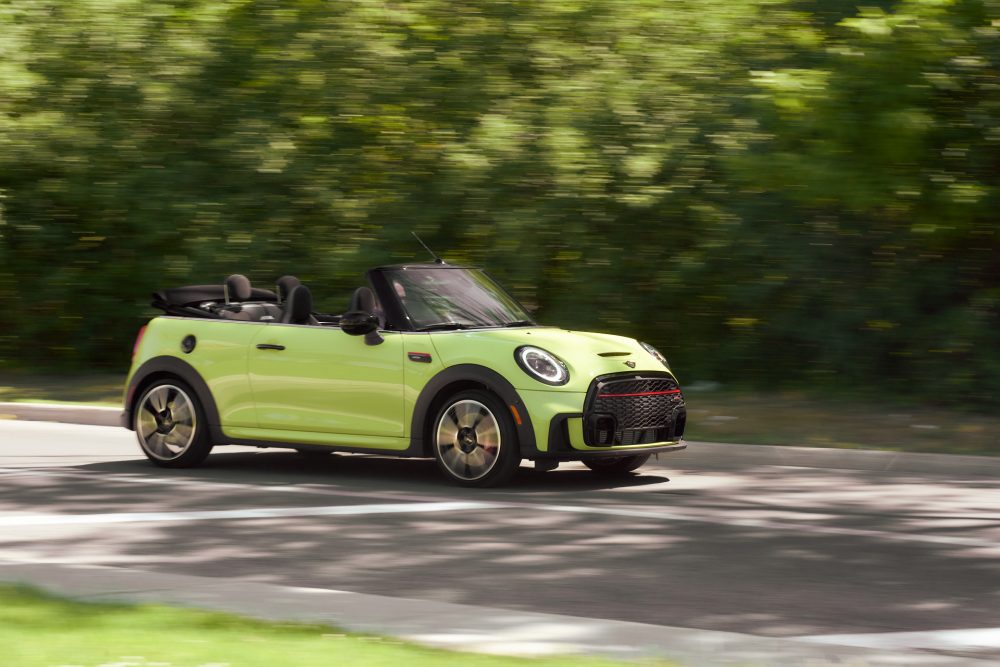 I’m not sure if it’s because of the added weight of the convertible roof combined with the robotic behavior of the automatic gearbox, but I didn’t find myself having as much fun behind the wheel of this MINI as I did in other models. Compared to the Cooper S I drove in the middle of winter a while back, or even my old Cooper, this one felt heavy and somewhat chunky in the corners. Mind you, it’s not because its called a MINI that’s it’s necessarily light on its feet. Equipped this way, the JCW weighs in at almost 3,000 pounds. 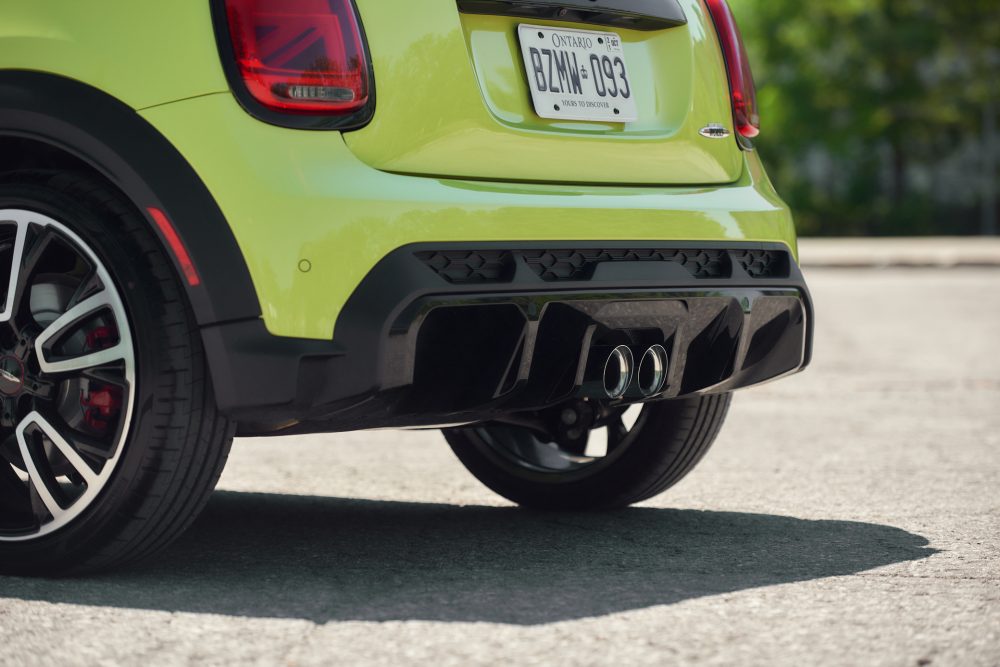 The result of such girth in a car of this size is a machine that gets easily unsettled if you dare enter a corner too fast with it. The grip is there, but it quickly runs out of it from all the excess weight it must cope with. So the moment the car loses grip, the nose plows forwards and everything transforms into a messy festival of understeer and tire squeel. 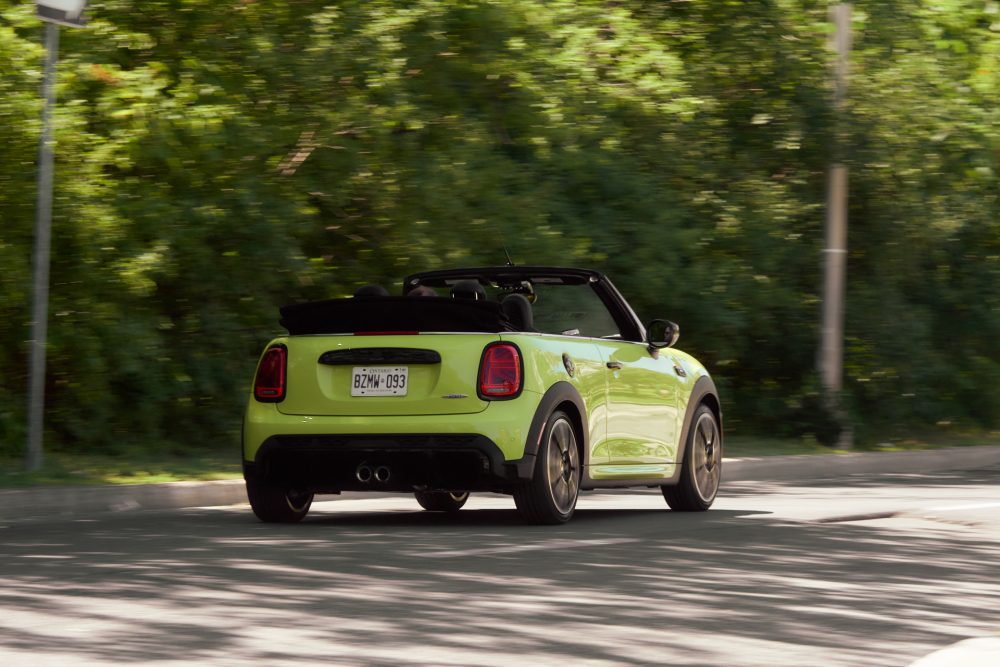 But if you dial things back a bit, the 2022 MINI John Cooper Works is still respectfully quick and satisfying to to drive on a twisty bit of road. Just don’t expect it to be as precise as other hot hatchbacks like a Golf GTI or a Hyundai Veloster N. What this MINI has going for it is a solid chassis and one of the most satisfying steering in the business. And lest not forget open air motoring, a feature no other hot hatchback currently offers. 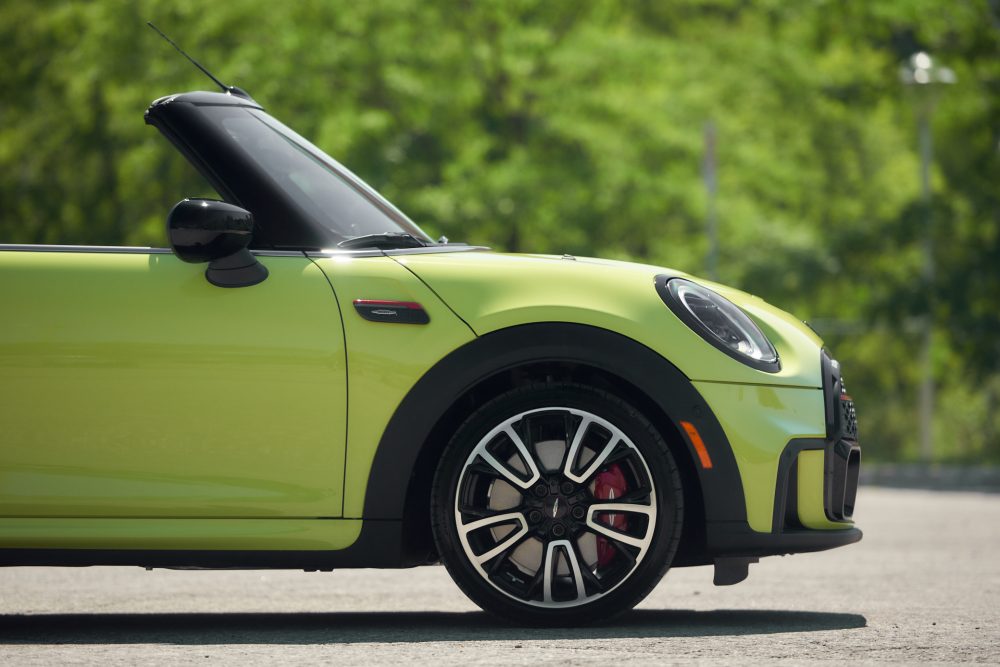 The turbocharged engine pulls good at any RPM, but prefers punching its twist in the low to mid range areas of the tachometer. While it will rev to redline with ease, doing so won’t necessarily make the car quicker. The JCW’s engine may be small, but it packs a punch once its turbocharger starts boiling, with more than ample low-end torque at your disposal for overtaking. The automatic gearbox also operates at near telepathic levels, always guessing your next move with lightning quick shifts. But I still firmly believe the convertible model deserves a manual gearbox option. 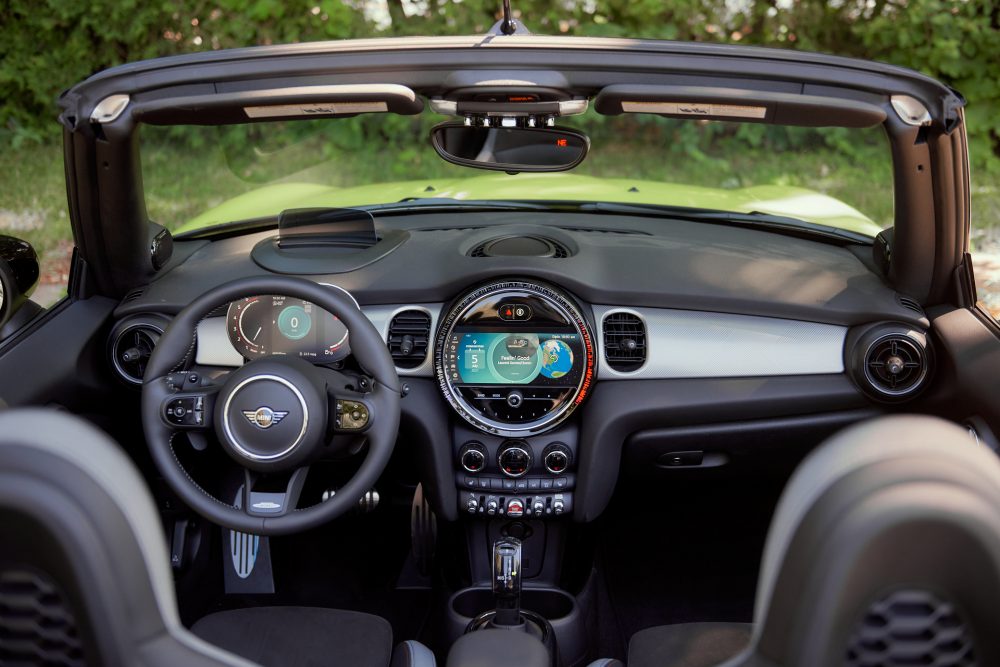 MINI did a fantastic job of quelling wind turbulence by giving the car a portable air deflector that can conveniently be installed over the rear seats. While it does turn the car into a two-seater, wind motions are kept in check at high speeds thanks to it, further adding to the convertible’s wind-in-your hair appeal. 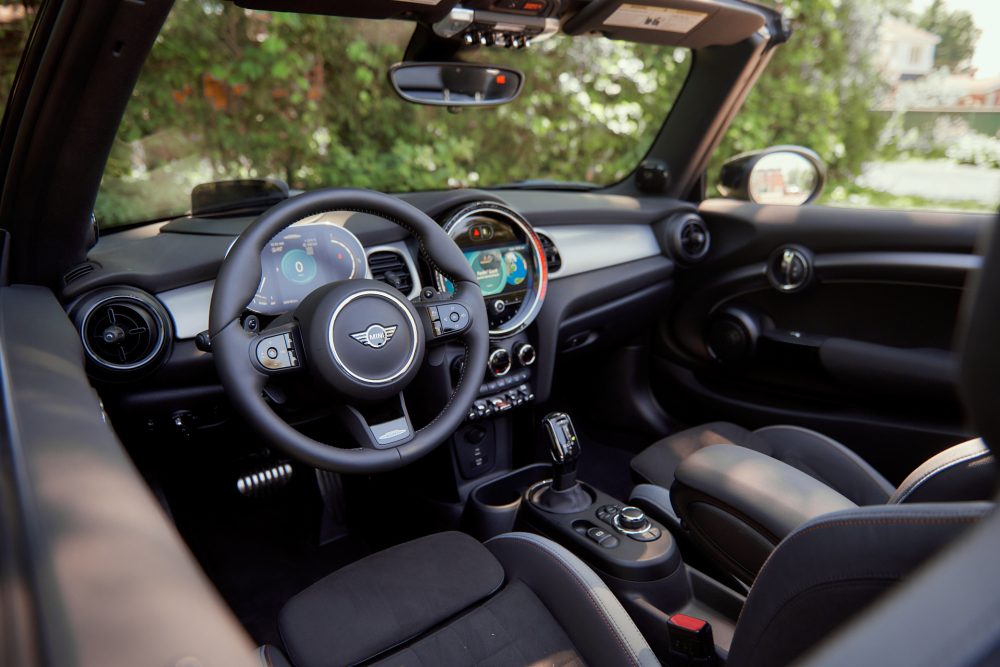 A large chunk of the facelift impacted the entire MINI lineup’s cabin. There’s now a fully digital gauge pod which was first introduced in both the Cooper SE electric and GP. The infotainment system is also all new, with a updated interface and a standard 8.8-inch screen that’s still encapsulated inside a stylish circular layout. It’s an intuitive system to operate thanks to the central mounted knob dial and quick responding menus that are decorated in stylish colors and motifs. New cabin lighting and materials also help further emphasize the MINI’s playful character. 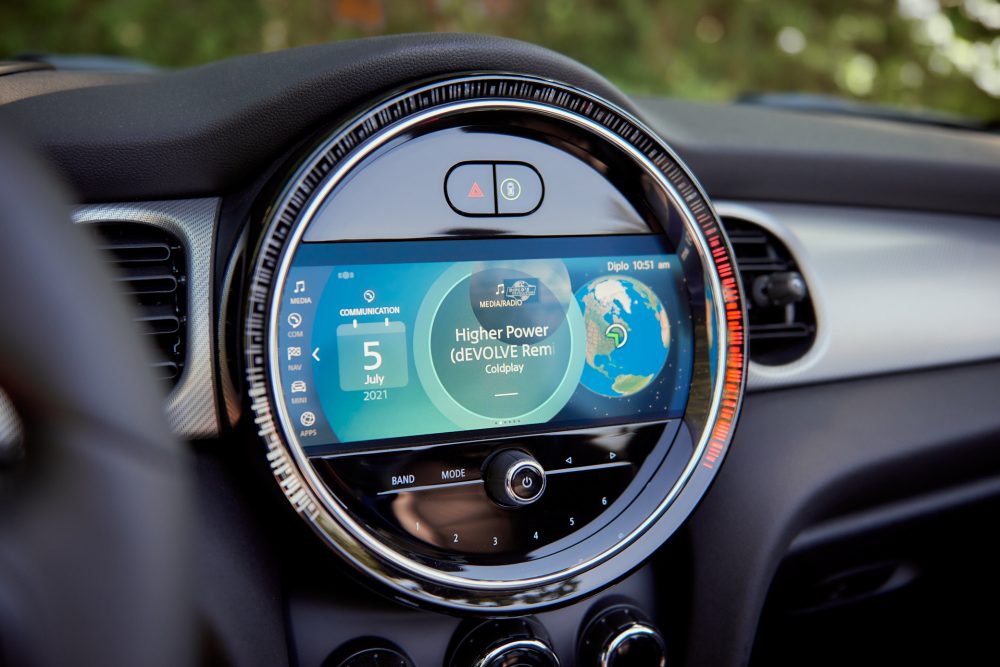 Generally speaking, the JCW’s cabin is built like a tank, with premium feeling materials and build quality that would put a Mercedes-Benz S Class to shame. Doors close with a satisfying “thump”, all plastics feel soft and of good quality, and the entire car feels like it’s an expensive, high-quality item. However, rear seat room and cargo space do remain an issue in a MINI. You don’t buy these cars for rational reasons. A MINI is all about how it makes you feel behind the wheel. 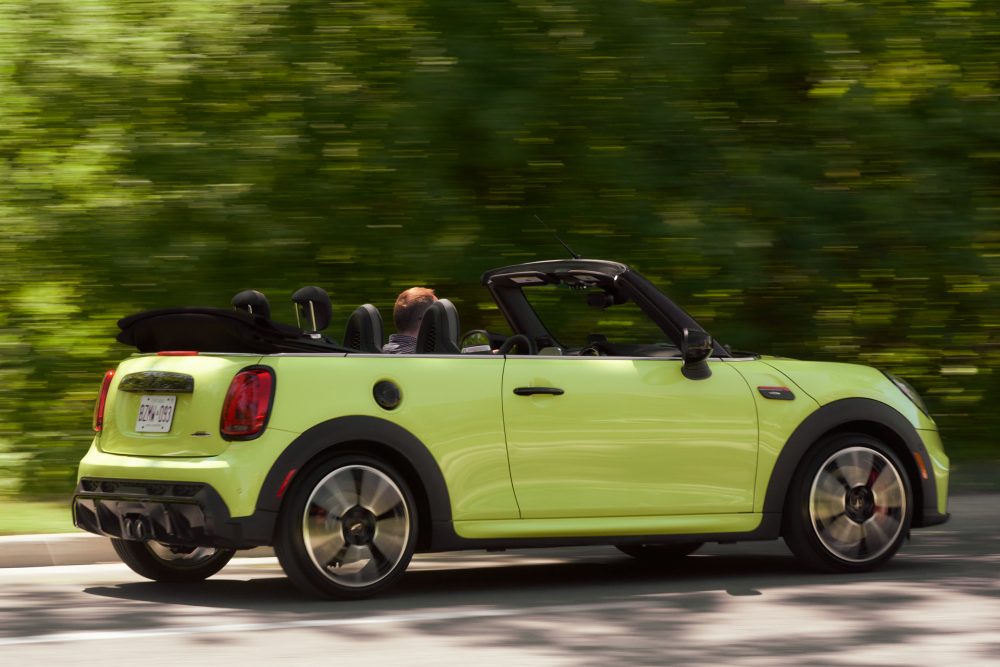 The 2022 MINI John Cooper Works convertible does at least stay true to what it has always been: an adorable summer toy that’s not exactly cheap, but returns a satisfying owning experience through its unique styling, stellar build quality and above average performance. While not as nimble nor athletic as some other pocket rockets currently on sale, the JCW makes up for it with its charming looks, premium feel and ability to turn a quick drive into a meaningful event.