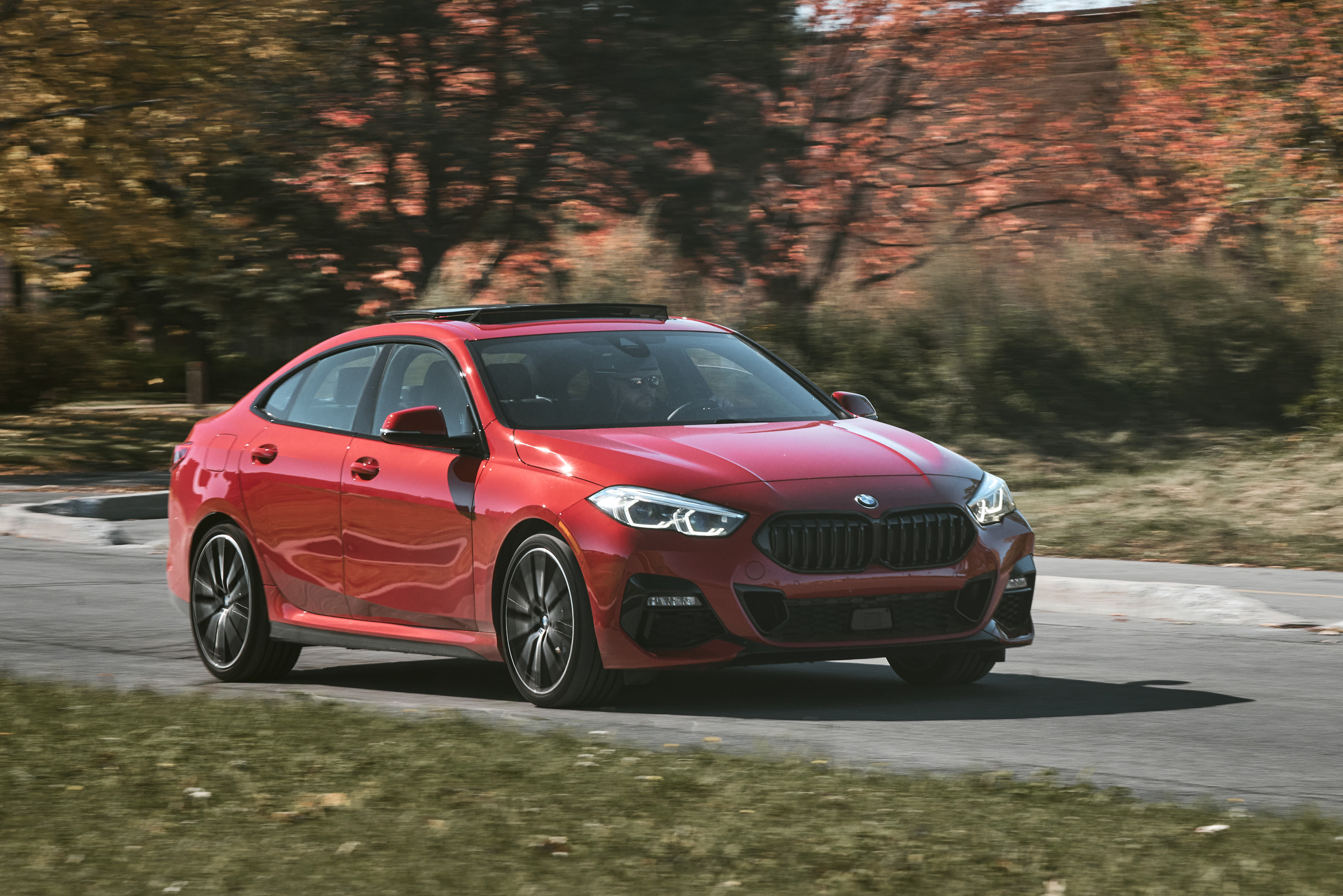 The 2020 BMW 228i Gran Coupe has absolutely nothing in common with the last-generation 2-Series; that rear-biased, manual transmission darling of car that also underpinned the absolutely majestic BMW M2. This new 2-Series resets the entire lineup, for better or for worst. But while us enthusiasts aren’t exactly agreeing with the decisions behind it, it’s exactly what BMW needs to better compete in that segment. 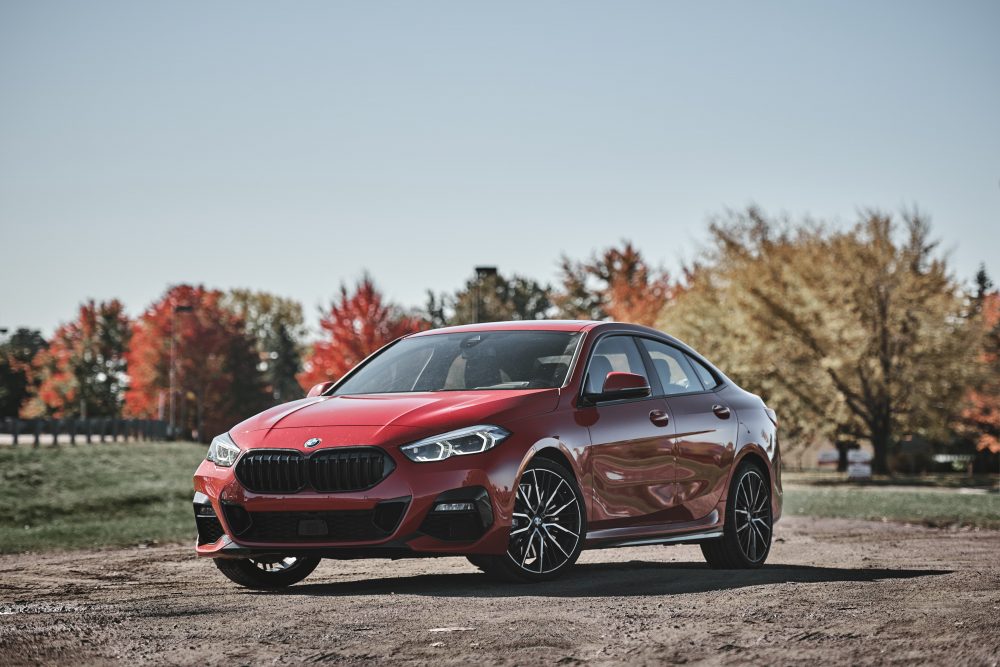 Let’s lay down the cold hard facts: the 2020 BMW 228i is front-wheel biased, rides on a platform that’s shared with a MINI Cooper and no longer offers a manual gearbox option. Ouch, what a punch in the face for the BMW faithful. 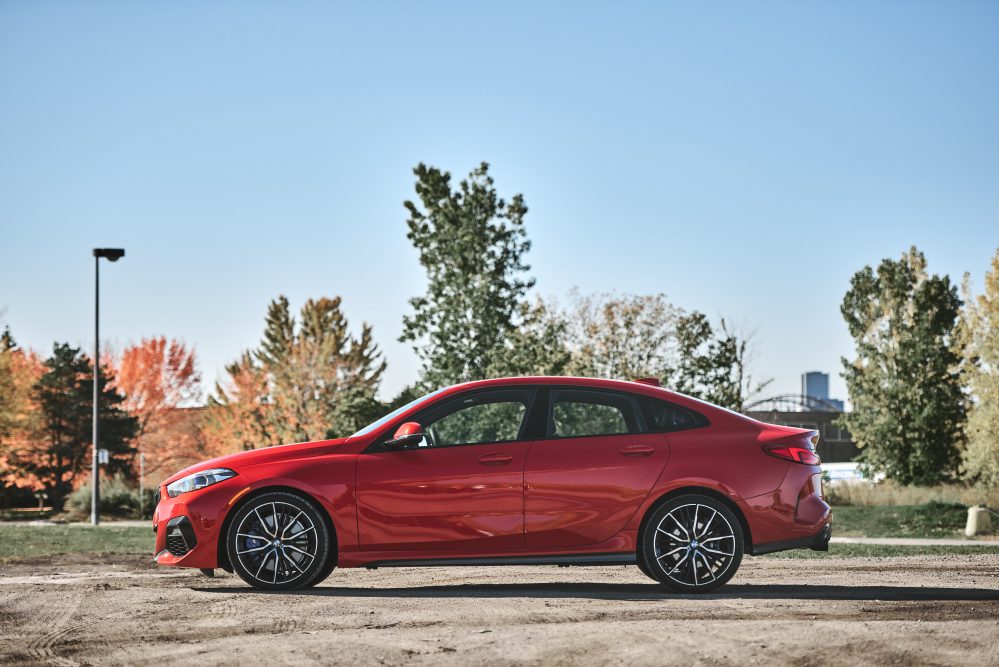 But what you also need to know, is that while we all loved the old two-door 2-Series for being, well, so typically BMW, it wasn’t competing very well in the subcompact luxury sedan segment, a category of cars that has blossomed in the last few years. And the competition is fierce, with offerings like the Acura ILX, Audi A3 and Mercedes-Benz A and CLA Class. Cadillac has entered this game too this year, with the CT4, a smaller version of the CT5, which I’ll have a chance to get my hands on next month. All of these cars are four door sedans, which is why the little 2-Series kind of had to keep up. 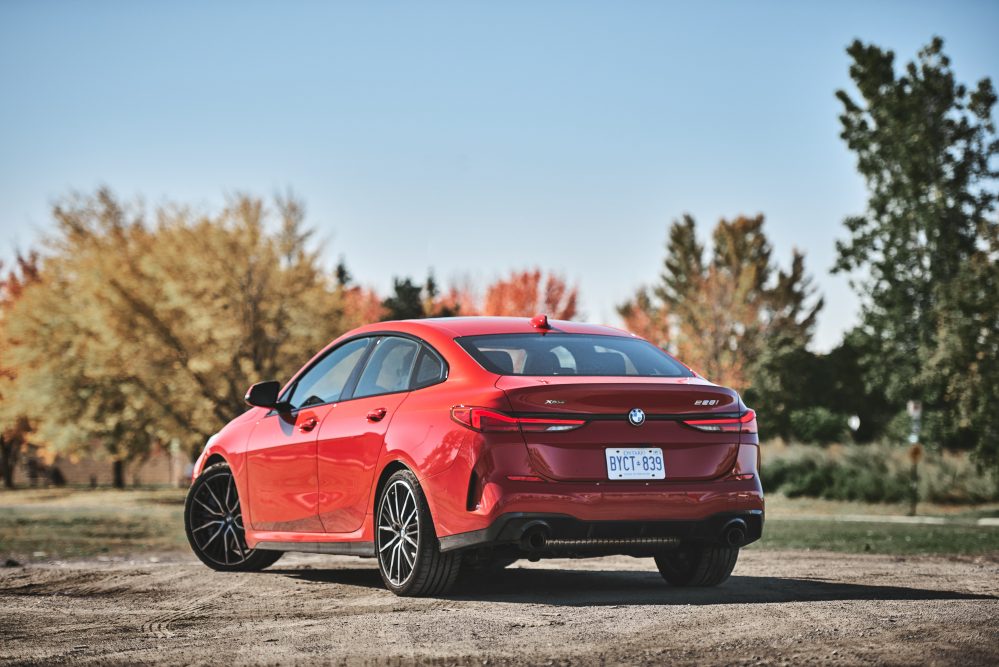 To better take them on, BMW sources a transverse architecture from MINI. Internally known as the UKL2 platform, it currently underpins the MINI Clubman and Countryman, as well as the BMW X1 and X2 crossovers. This makes this new 2-Series the first front-wheel biased BMW automobile in decades. BMW says that the decision mostly had to do with packaging, allowing its engineers to maximize rear leg room and cargo space, which I’ll get back to in a bit. 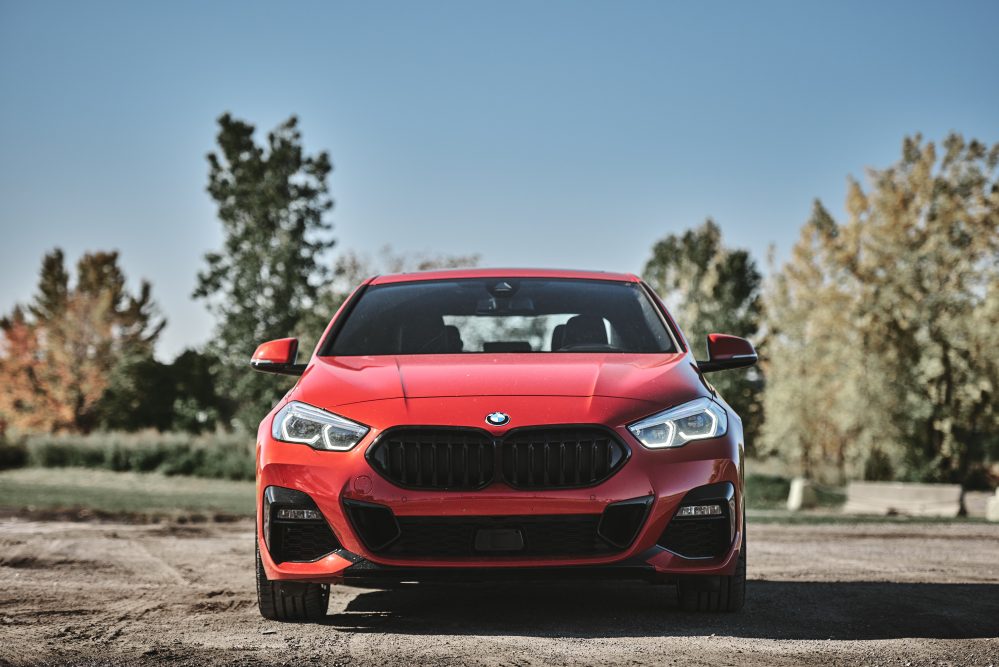 I’m also going to come out and say that I find this car looks weird. BMW technically qualifies it as a coupe, which is why it was comically named “Gran Coupe”. I assume it’s to mimic what Mercedes is doing with the CLA-Class. But it doesn’t really work. The car looks narrow and high, appearing like some sort of glorified Corolla rather than an actual German sport sedan. It just looks goofy. 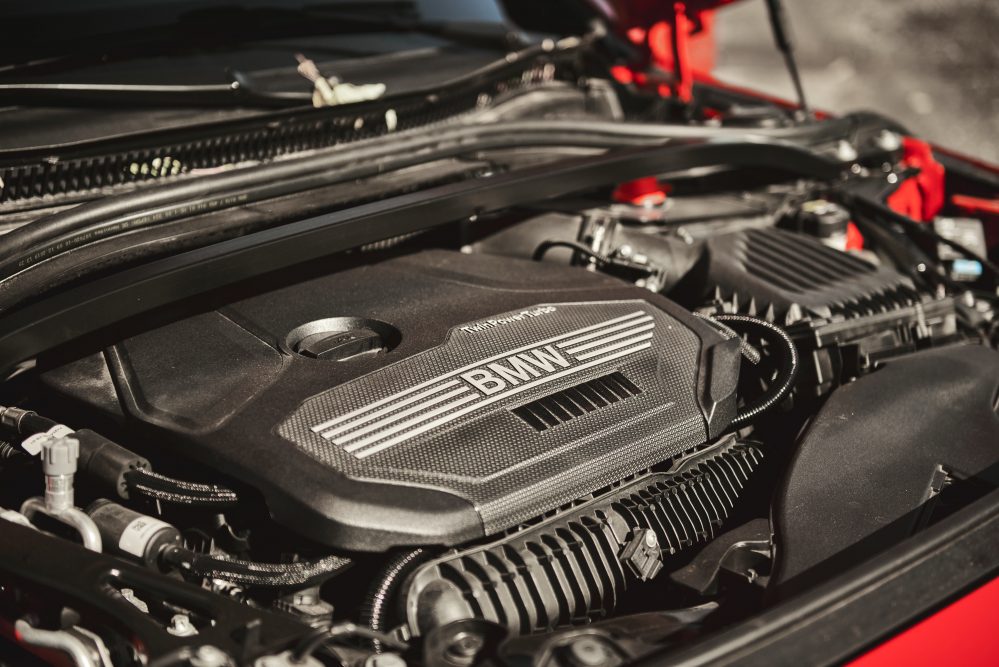 The car currently comes in two flavors, either this 228i, or a top-flight, 301-horsepower 235i. Both cars are powered by the same turbocharged 2.0-liter inline four, but tuned differently. The bargain basement 228i pumps out a healthy 228 horsepower and 258 lb-ft of torque. It’s mated to an eight-speed automatic gearbox. BMW’s xDrive all-wheel drive is also standard on all models sold in Canada. 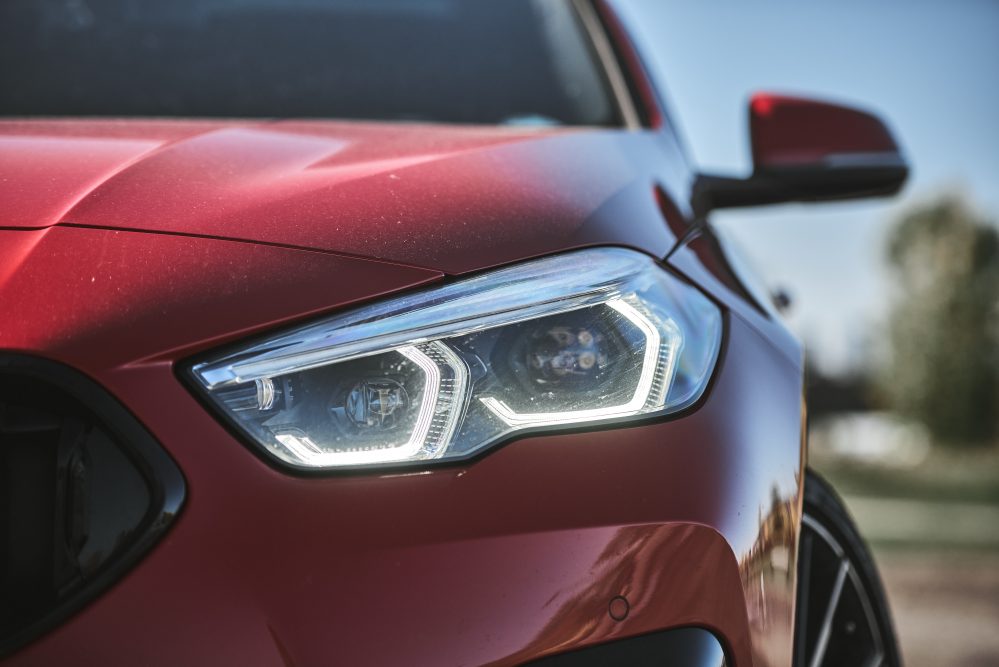 Enthusiasts shouldn’t worry, though, because BMW says a real, rear-wheel drive BMW M2 is in the works. It’s still unclear which platform it will be based on, presumably an updated version of the old one. BMW also says it’ll offer the three pedal option. So there’s hope. 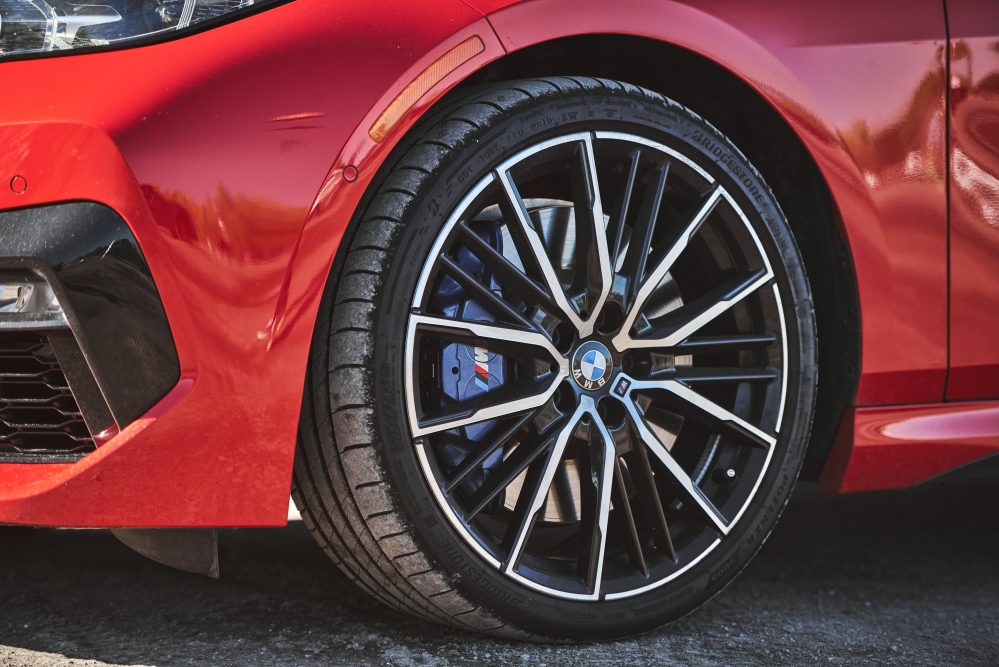 Pricing for a 2020 BMW 228i kicks off at $42,500, making it a tad more expensive than a base Mercedes A-Class or Audi A3. But those cars also come standard with front-wheel drive. The baby BMW therefore offers more car for your dollar, but I highly recommend keeping an eye on that options list, because things can quickly get out of hand. My tester, which had the $8,750 Premium Excellence package, and $1,000 M Sport Plus package – which is totally worth it just for the killer wheels and brakes – stickered for a whopping $53,395. 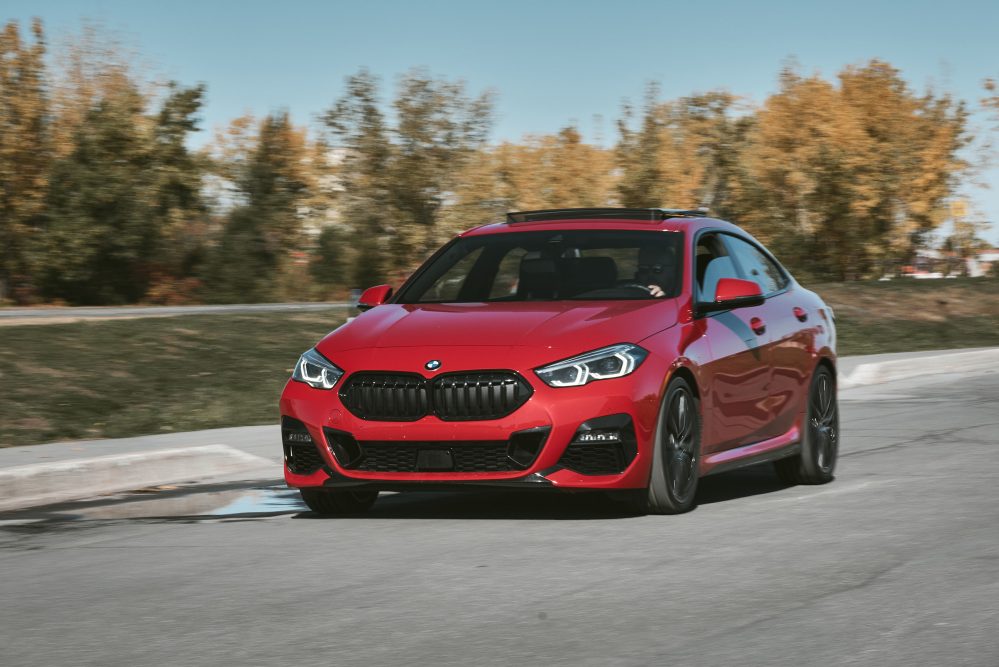 The fact that the 2020 BMW 228i is based on a MINI isn’t exactly a bad thing. After all, MINIs are fun to drive, and some of them handle really well. In that respect, this new 2-Series inherits those positive traits as it’s huge fun to thrash, throw hard into a corner, or simply use for daily driving. There’s nice damping in the way the suspension is set up that makes you want to come back for more, and the level of out of corner grip is rather high. 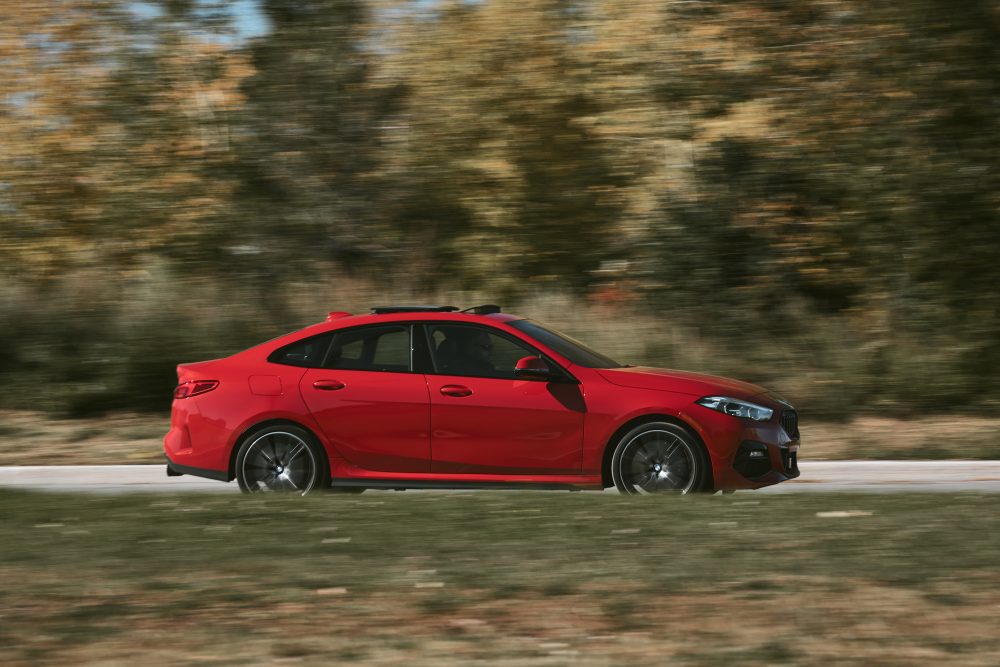 Unfortunately this architecture also comes with some pitfalls. I assume it’s because it was designed for short wheelbase applications – i.e. a MINI Cooper -, explaining why the ride is somewhat choppy over rough roads. The suspension is stiff, which is expected from a German car,  but it’s also very jumpy and jittery, making for a lively experience – which is fun -, but also one that can creep up on you when you’re not paying attention. A Mercedes A-Class is definitely a more grown up car. Heck, I’ve felt a more buttoned down ride in an Acura ILX. 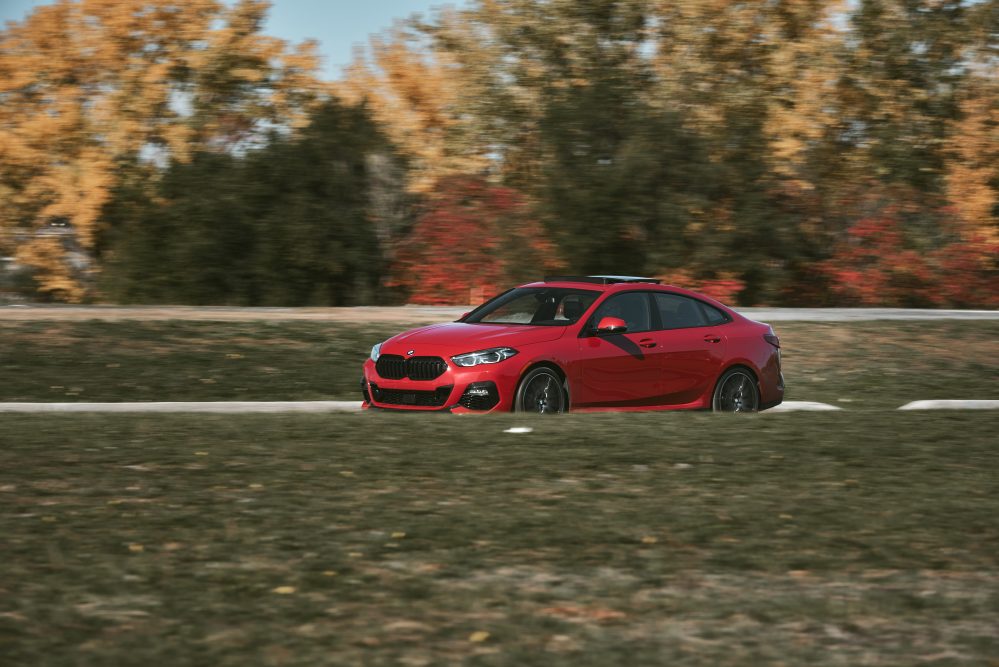 Power is however the 228i’s tour de force, where the overfed four-pot feels a lot larger than it is thanks to a thick torque curve that kicks in way low in the rev range and sticks with you all the way to redline. The 228i feels more eager off the line than its rivals, and its transmission blips through gears in rapid-fire precision. It’s also a quicker car than both an A3 and an A-Class, sprinting from 0 to 100 km/h in 5.3 seconds, allowing it to come neck to neck with the larger 3-Series powered by the same engine. Not bad for the cheapest car BMW sells. 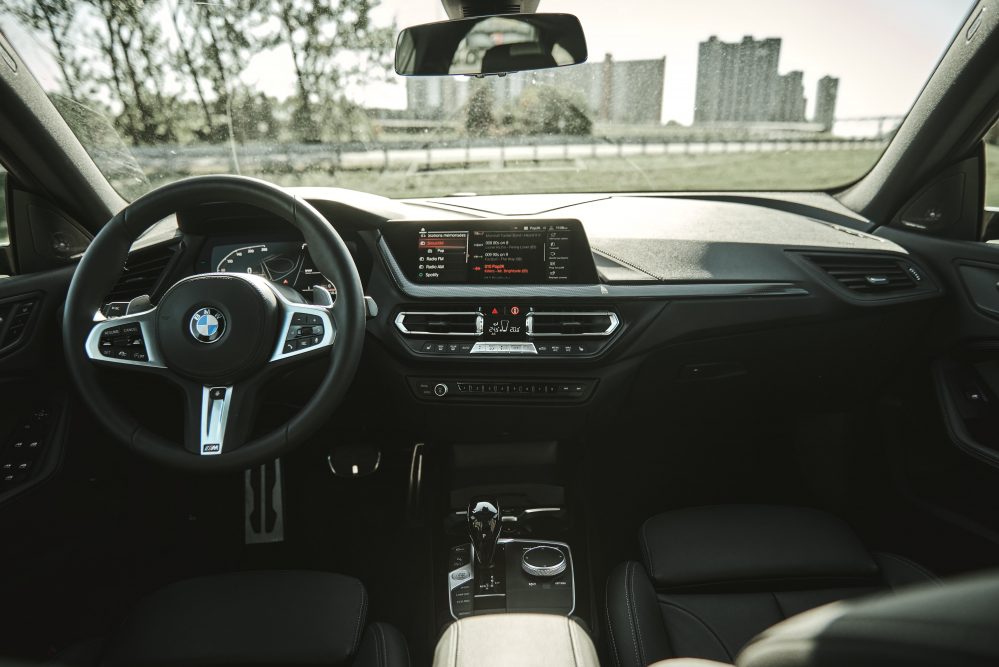 Inside, the 2020 BMW 228i spices things up with BMW’s now expected fully digital gauge cluster. In typical Bavarian fashion, the cabin is spartan and utilitarian, but also impeccably well put together  and ergonomically brilliant. The overall presentation isn’t as punchy as Mercedes’ stylish cabins, even if BMW tries to spice things up with cool ambiant lighting. It simply doesn’t match an A-Class’ pop. 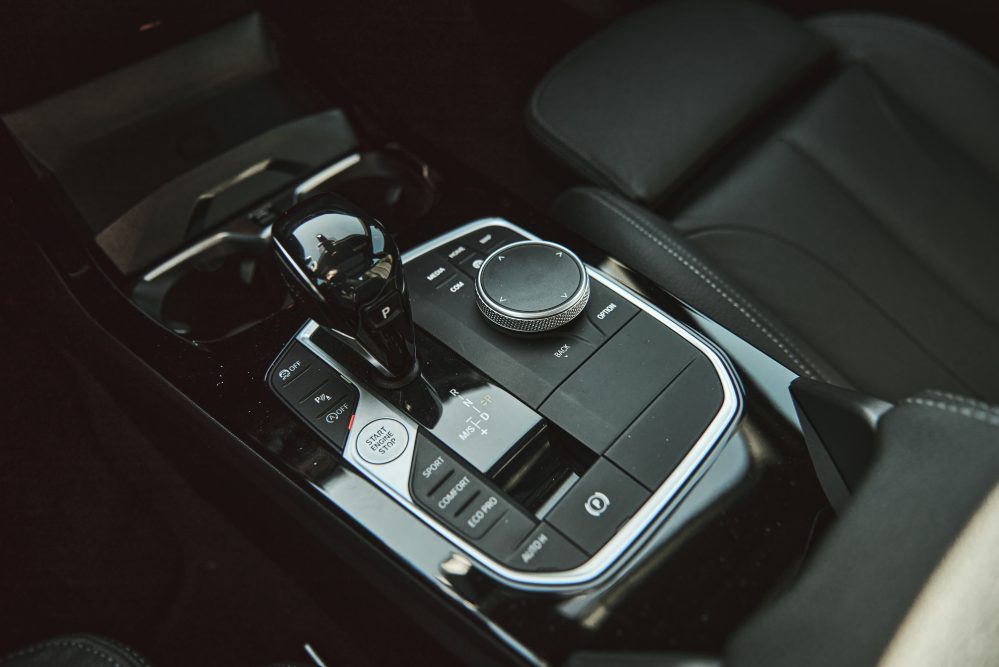 But the 2-Series makes up for that by the simplicity of its presentation and the downright ease of operation of its iDrive infotainment system. While just as complex as its main German rival in terms of menu personalization and features, it’s all easier to access in the BMW, and downright less distracting. 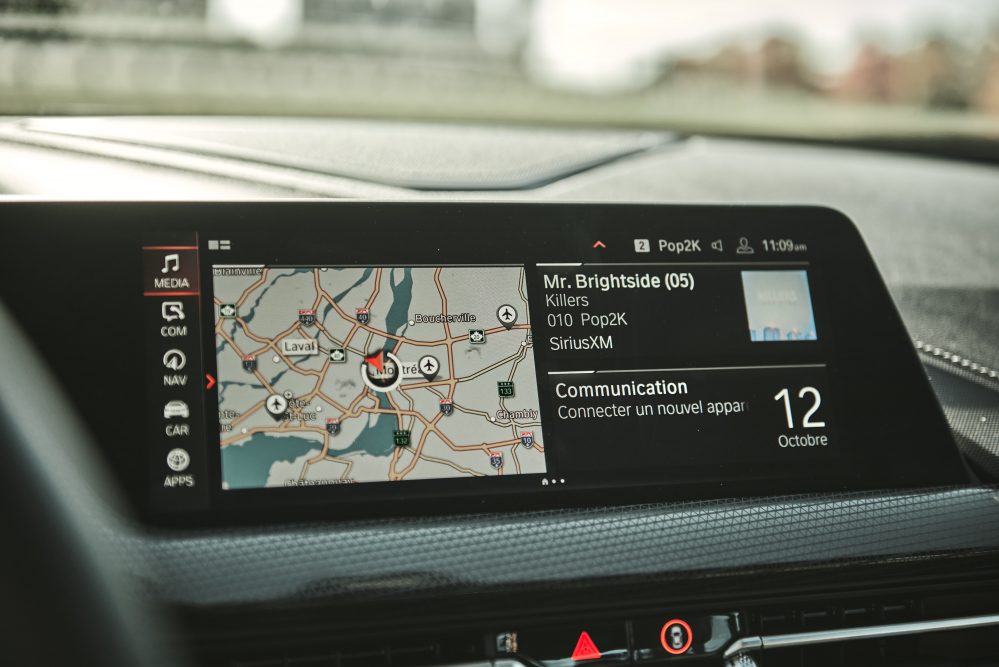 Everything is a click, or a knob dial away. Drive modes actually alter the car’s behavior, and I absolutely adore this car’s driving position. The seats proved supportive for sporty driving, but also comfortable for a long roadtrip. I’d know, as I used this 2-Series to drive from Montreal to Calabogie. 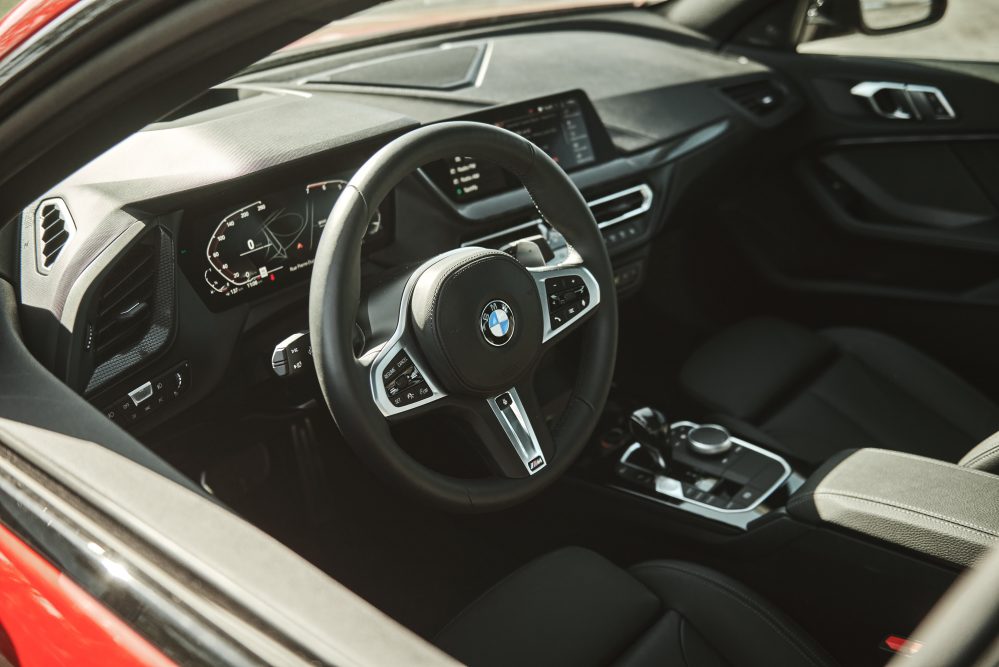 To nobody’s surprise, rear legroom is cramped in a 2-Series, but that’s also the case with all small German sedans. The 228i however beats its rivals in cargo space. With a trunk that’ll eat up to 424 liters of your gear, this new 2-Series isn’t only much more practical than its predecessor, but downright pulverizes the entire segment, including the Civic-derived ILX. 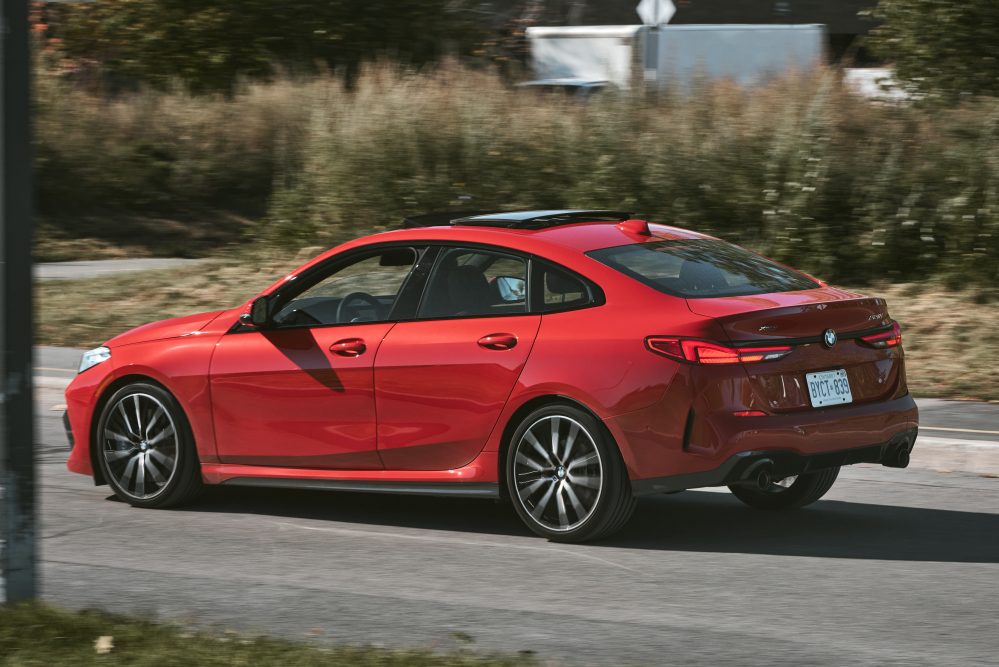 Perhaps where the 2020 BMW 228i makes the most sense is in how much car you’re getting for your hard-earned dollar. Sure, its price tag kicks off a bit higher than the competition, but you’re also getting more in return, setting a solid foundation for attracting new blood into a BMW showroom. The car is well packaged, and the product is certainly of good quality. While I’ll definitely miss the old car, I get why BMW went down this route. The new 2-Series therefore feels fresh, upscale and fun to drive. Now, BMW, it’s time you show us the next-generation M2.