The 2021 BMW M8 Competition Gran Coupé (that name) is a car I know very well. You guys probably remember when I drove one in convertible form last summer, and also in the M850i trim the year prior. In all its versions, the BMW 8-Series is a marvelous luxury grand tourer, even if some have accused it of being a little too sober. Including myself. But the more time I spend with it, the more I appreciate it for the spectacular machine that it is.

Of course, the 2021 BMW M8 Competition Gran Coupé exists only to satisfy to ego of its driver, or the people who built it. While it may seem like a useless vehicle to some, there’s no denying its significance in the German automotive war. Riding on the same platform as a 7-Series, the 8-series’ main mission was always about offering its driver even more opulence, comfort and performance.

And in Gran Coupé form, it simply gives it a bit more practicality, perfect for when you’ll need to explain to your spouse why you just spent $150,000 on a shiny new BMW. 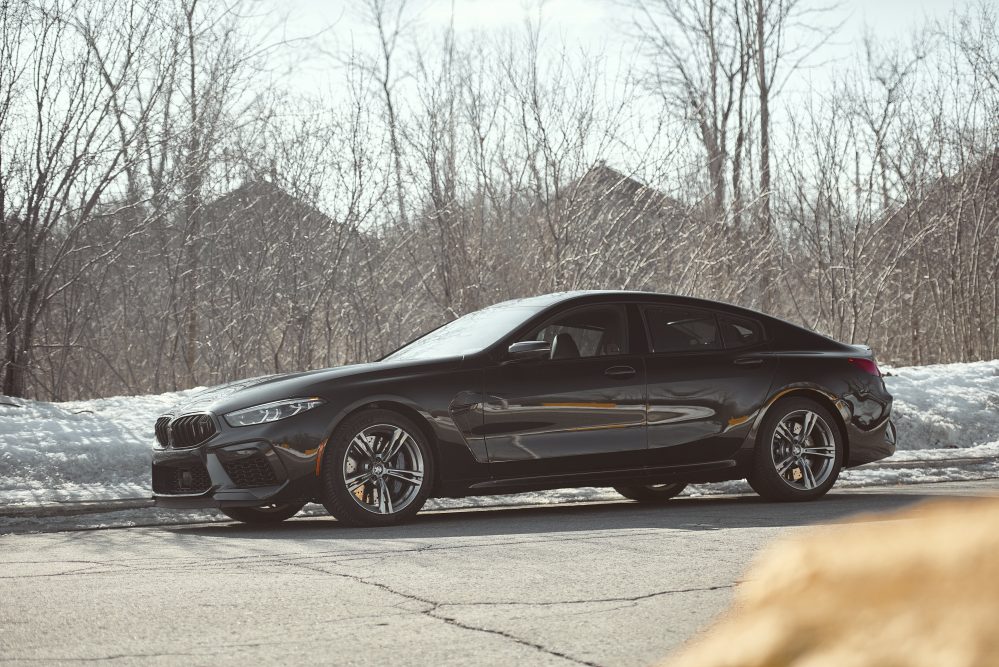 The M8 Gran Coupé competes directly against machines like the Porsche Panamera Turbo, the Mercedes-AMG GT 4 door, or even the Audi RS7 Sportback; cars that were designed to cover ground quickly, with utmost comfort and convenience, all while being able to carry the family for a roadtrip during the weekend.

All M8s – weather it be a coupe, a convertible or a sedan – are powered by the same twin-turbocharged 4.4-liter V8 that’s good for 600 horsepower and 553 lb-ft of torque. It’s mated to an eight-speed automatic gearbox that’s provided by ZF, as well as BMW’s xDrive all-wheel drive system. But it’s the same system as in the M5, meaning it can disengage its front wheels to become rear-wheel drive only.

The Competition package, which sells for an extra $10,000, adds 17 more horsepower. That’s the one I was driving. The kit will also add a set of unique forged alloy wheels (not featured here due to winter tires), a louder exhaust, even more carbon fiber bits and a slightly retuned suspension. Final price for the badass black Bavarian you see here was $161,500.

How Fast Do You Need To Go?

I once said that the 2021 BMW M8 was one of the fastest automobiles I have ever driven, and I still stand by that claim. While a Porsche Taycan or even a Lamborghini Huracan are no slouches, what impresses the most about the M8 GC is how much it hides its speed.

You just never notice how fast you’re actually going, which is mostly why this car is both fascinating and a little annoying. Accelerations are brutal, and clocking over 200 km/h will happen at the blink of an eye, so you’d better be alert, because you’ll quickly lose your driver’s license. As a matter of fact, each time I drive a modern BMW powered by this engine, I can’t believe how potent it always is.

There’s power all the time, at any gear, in any situation. It just never stops, and the eight-speed gearbox does a fantastic job of shuffling through the gears, downshifting at blisteringly fast speeds and always ready to attack. It also proves that ZF has officially eaten up all other transmission companies. It’s even better than most dual-clutch systems currently on sale. Oh, and brakes: the M8 Competition has a lot of that. So don’t worry if you’re flying at illegal speeds, because you can be damn sure this car will bring you back to legality within seconds.

And don’t think this big girl is all go and no finesse, because it’s a lot more athletic than one might think. Even with a 4,480-lb curb weight, the M8 Gran Coupé can still dance. Sure, its heft is felt in the corners, but its steering is precise, and the level of grip is immense, especially during corner exit when it finds grip.

In rear-wheel drive mode, it’ll happily wag its tail, but never to the point to scare you. In all-wheel drive mode, the M8 GC will catapult itself to 100 km/h from a standstill in 3.3 seconds flat while clawing to the tarmac no matter what kind of surface covers it. Maybe the only area where this car disappointed me from a technical standpoint is fuel economy. I get that this is a 600-horsepower V8, but BMW usually displays decent fuel economy numbers, even in its M cars. Not here. You’ll be lucky if you pull elevens with this one.

Step inside, and the Gran Coupé is plagued with the same problem as the coupe: it’s not flamboyant enough . It is, however, a wonderful place to spend some time in due to the impeccable build quality, the materials used and the subtle touches of suede and leather scattered here and there. But it’s never as eye-catching as in a Mercedes-AMG or even a Porsche.

Seating position is fantastic (and those seats look so sick), so is general rear comfort. Although headroom is slightly compromised due to the slopping roof. The M8 is a fantastic car to ride in for long trips due to its impeccable cabin insulation and well damped suspension that leans more towards grand tourer than actual M car.

Meanwhile, BMW’s class-leading ergonomics remain on point, with iDrive remaining one of the cleverest infotainment systems currently on sale due to its downright common sense and quick-reacting interface.

After spending an entire week with this very fat and very fast German sedan, I can’t help but admire what BMW has manufactured. Sure, you’ll get more flamboyance from a Porsche Panamera or an AMG GT 4 door, but none of these cars come close to the level of drivability the M8 offers its driver. Perhaps, most importantly, is that understated performance earns a lot more respect than a “look at me” attitude. If your goal is to cover ground quickly, while also using your car as an office along the way, and you’d prefer nobody knew about it, than the 2021 BMW M8 Competition Gran Coupé is definitely the ultimate driving machine you need in your driveway.