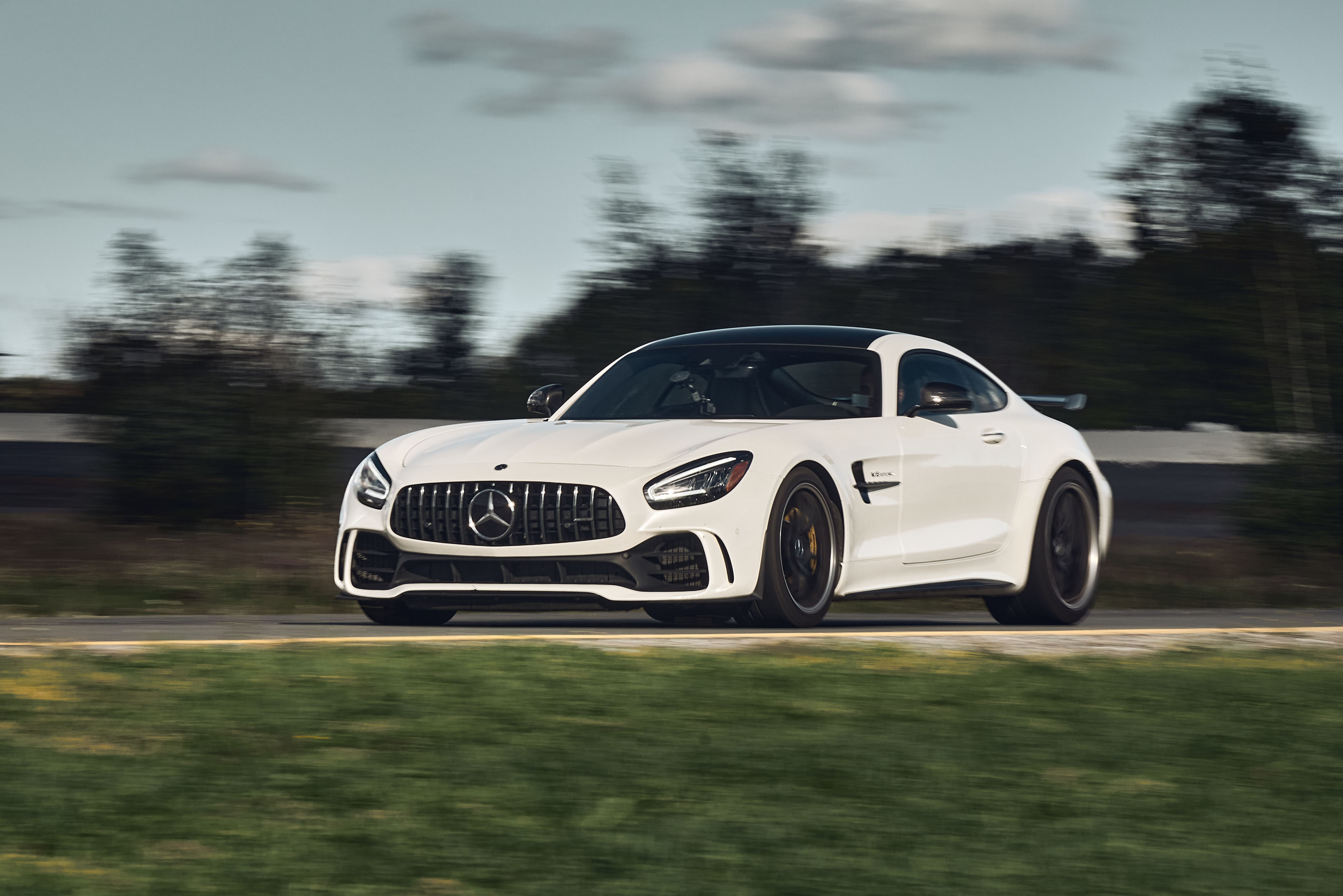 The 2020 Mercedes-AMG GT R (not to be confused with the Nissan GT-R) sits at the top of the AMG GT food chain as a wilder, lighter and faster version of an already mean machine. More importantly, because the AMG GT’s original mission was to take on the Porsche 911, Mercedes-Benz had to also follow its evolution. Hence, the creation of the AMG GT R, or if you prefer, the only real rival to a Porsche 911 GT3.

Let’s Geek Out Together 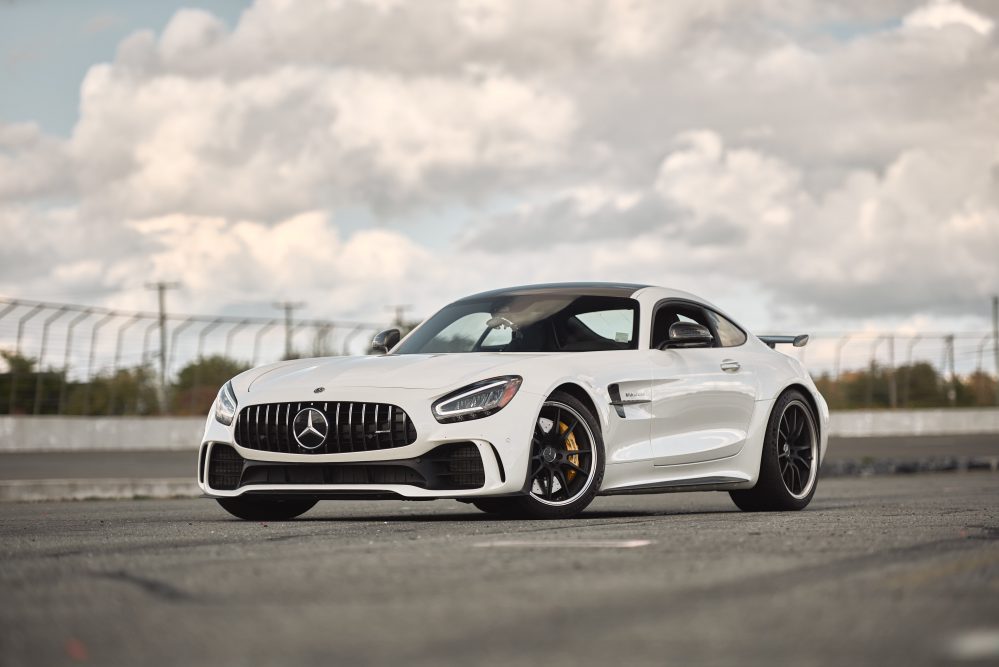 Ok, so there really isn’t anything rational or, well, affordable about the 2020 Mercedes-AMG GT R. If you’re expecting to find informatiom about cargo space or towing ratings, I invite you to go read about an Acura RDX or some other useless SUV. What you have here is a race car for the road, the pinnacle of AMG road cars, or if you prefer, an automotive enthusiast’s wet dream. 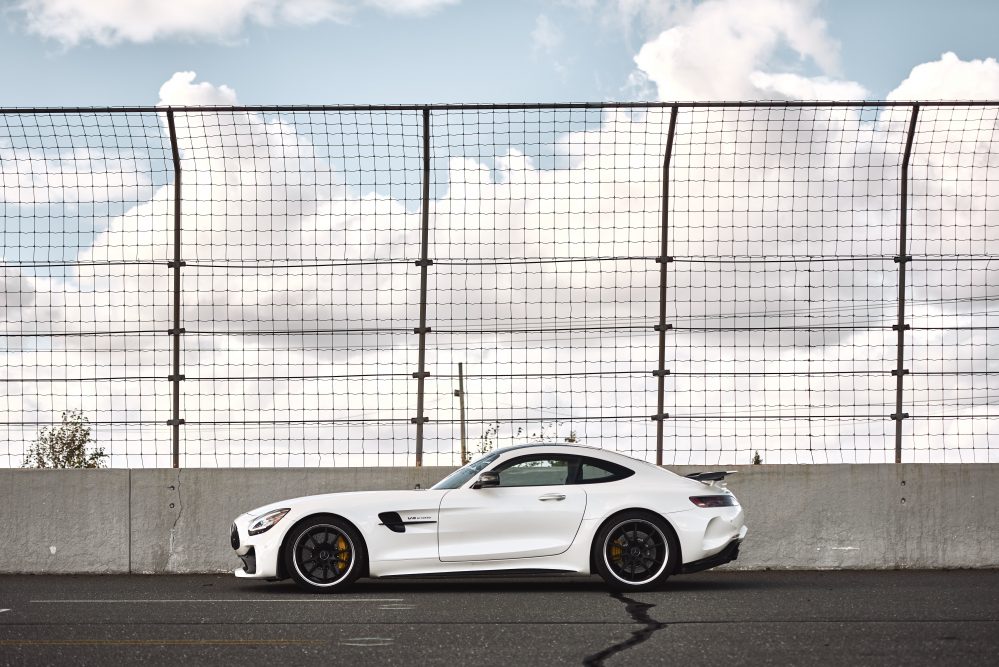 The AMG GT R is the most extreme version. Wait, that was before the AMG GT R Pro arrived. Or is it the AMG GT R Black Series now? Whatever, it’s still insane, as it lapped the Nürburgring in only 7:10.92 when it came out in 2017, making it the seventh fastest road-legal production car in the world at the time. In case you’re keeping track, that’s faster than its arch rival, the Porsche 911 GT3. 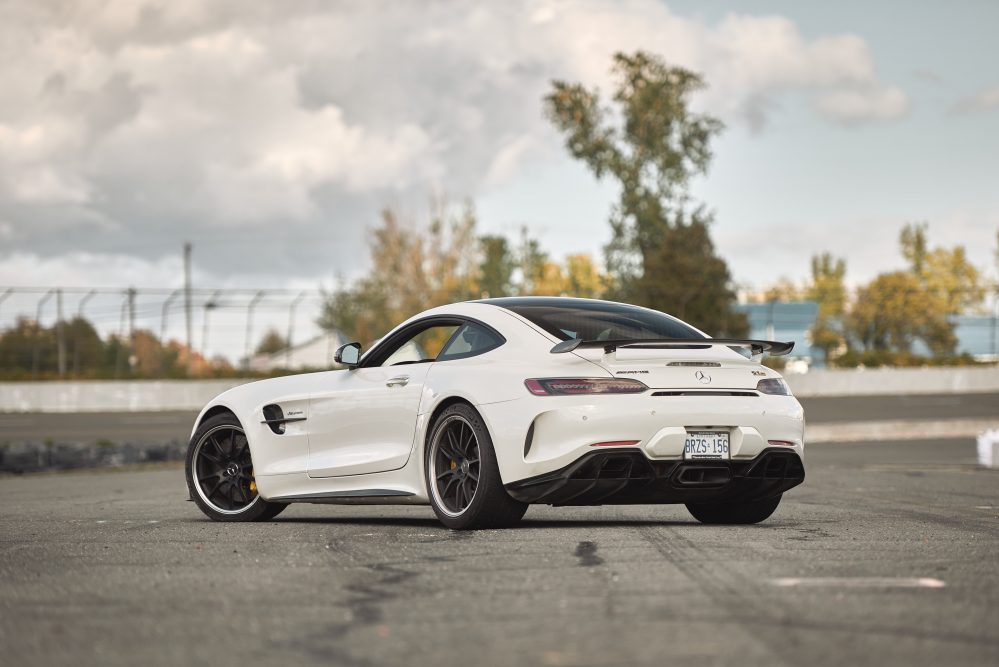 To get there, the GT R inherits several go-fast components from the Mercedes-AMG GT3 race car. The 4.0-liter twin-turbo V8’s output was bumped to 577 horsepower and 516 lb-ft of torque. It’s still mounted as far back towards the cockpit as possible – behind the front axle – for optimal weight distribution, so this is a front mid-engine car. The seven-speed dual-clutch SPEEDSHIFT transmission was shifted towards the back and fitted onto the rear transaxle for more weight distribution greatness. 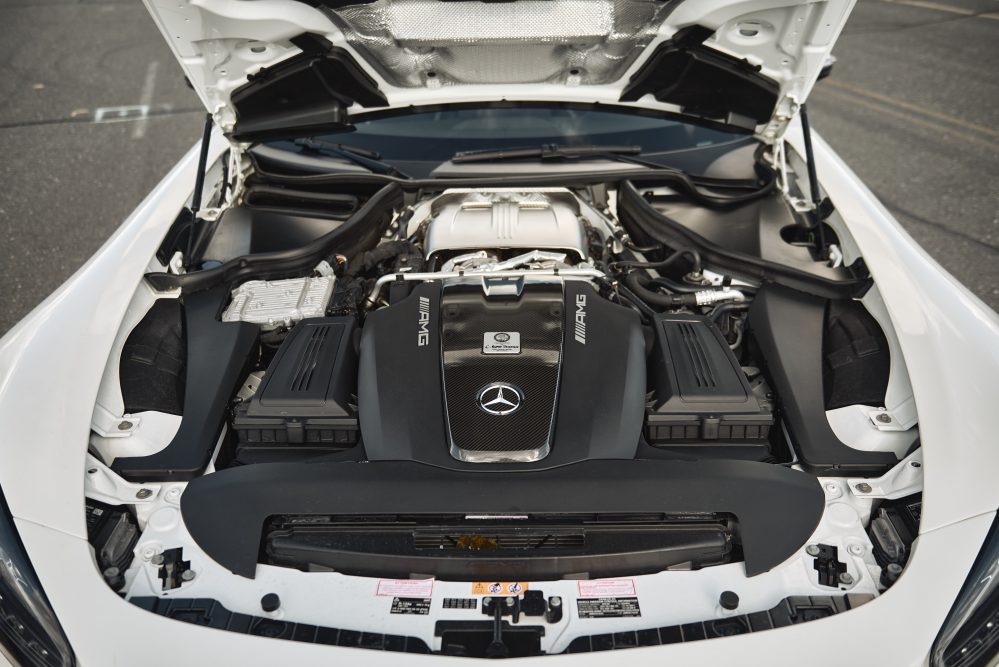 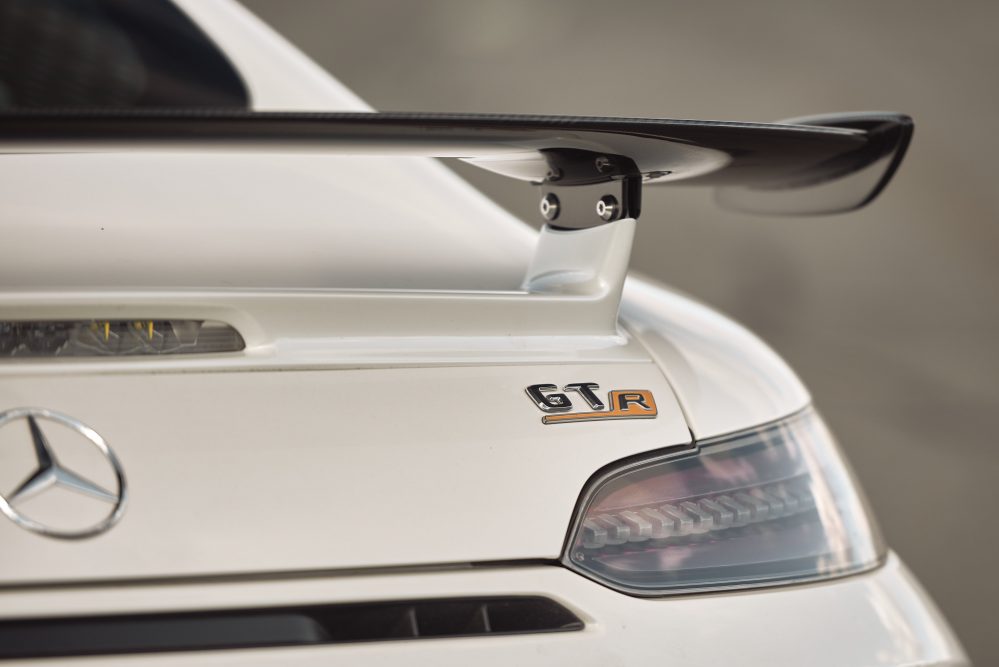 Acceleration from 0-100 km/h is achieved in roughly 3.6 seconds. That’s if you can manage to find grip from those massive 325 section-wide rear tires. The GT R will then keep huffing to a quarter mile of just over 11 seconds, with a governor-limited top speed of 305 km/h. Mercedes calls this the “Beast from the green hell” and, well, it’s not kidding. 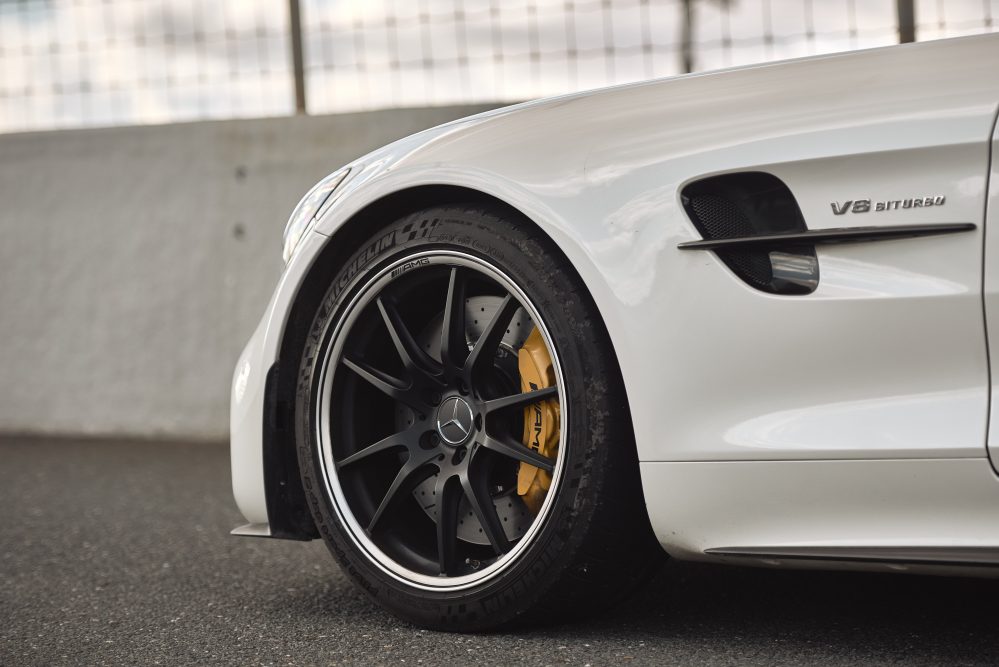 Pricing for an AMG GT R is obviously high, but still decent if you compare it to the Aston Martin DB11 V8 which is ironically powered by the same engine. The car you see here stickers for $209,600, or roughly $70,000 less than that bright yellow Aston you read about on these very pages.

You Need A Track 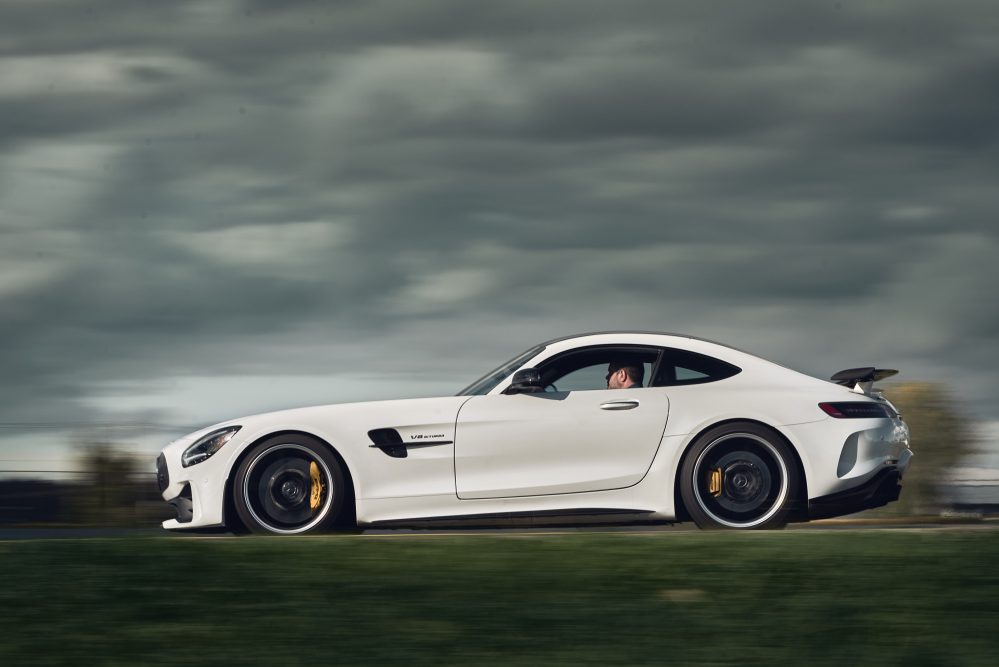 Obviously, in order to sample this car’s blistering performance, you need a racetrack, which is precisely why the folks at Sanair kindly loaned me their facilities for the sake of this review. And because that track is located in the middle of corn field east of Montreal, I was also able to sample the GT R’s on road composure, which is rather impressive to say the least. 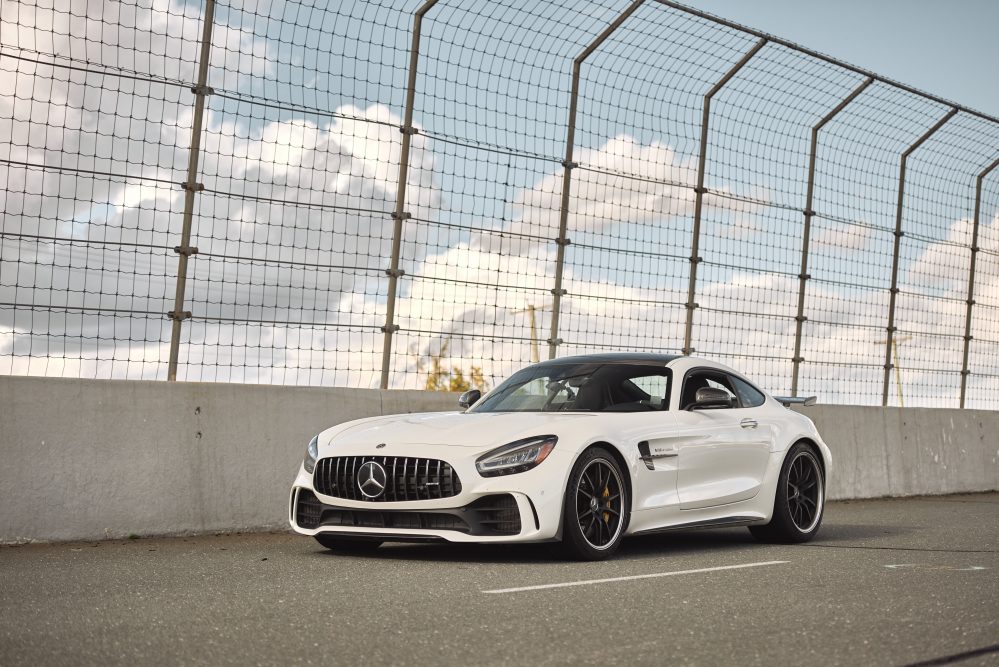 As it’s the case with most Mercedes-Benz vehicles, there’s a level of refinement and comfort here that’s hard to ignore, quickly transforming this fire-breathing monster into something just as docile as an S-Class. When set to Comfort mode, except for the growling V8 doing its thing underneath the long, curvaceous hood, it’s all rather tame and compliant. 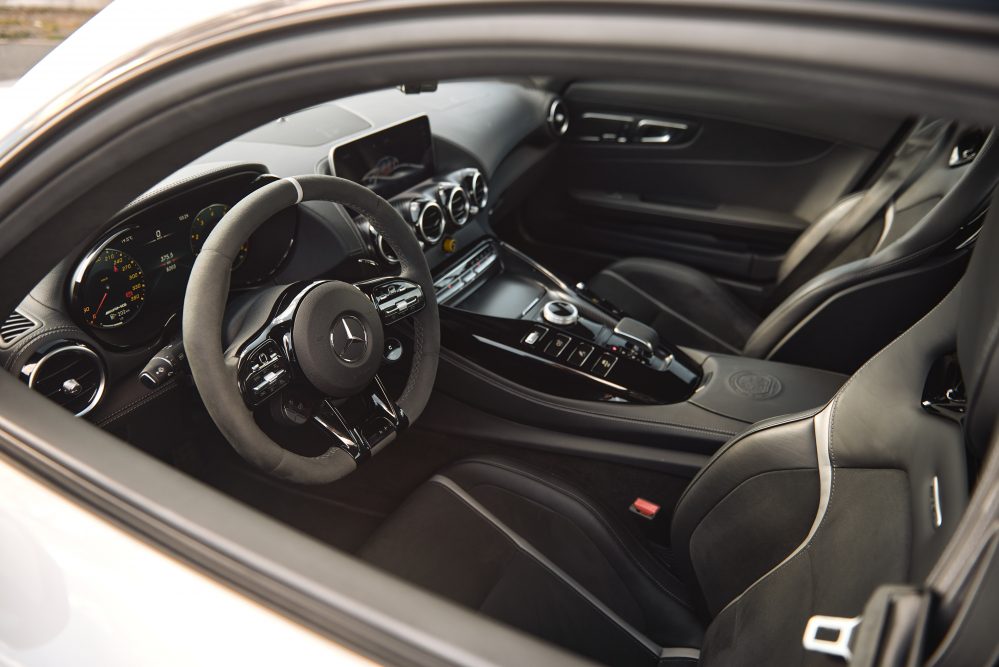 But the GT R also constantly reminds you it’s serious business. For instance, the cabin is snug and not always easy to get out of. You sit low in a this car, but the seats are also enormously supportive and comfortable. And like in an A-Class or even a CLA, the 2020 Mercedes-AMG GT R finally receives the MBUX infotainment system, except it makes do without the “Hey Mercedes” voice commands, to which I say: I’m fine with it. 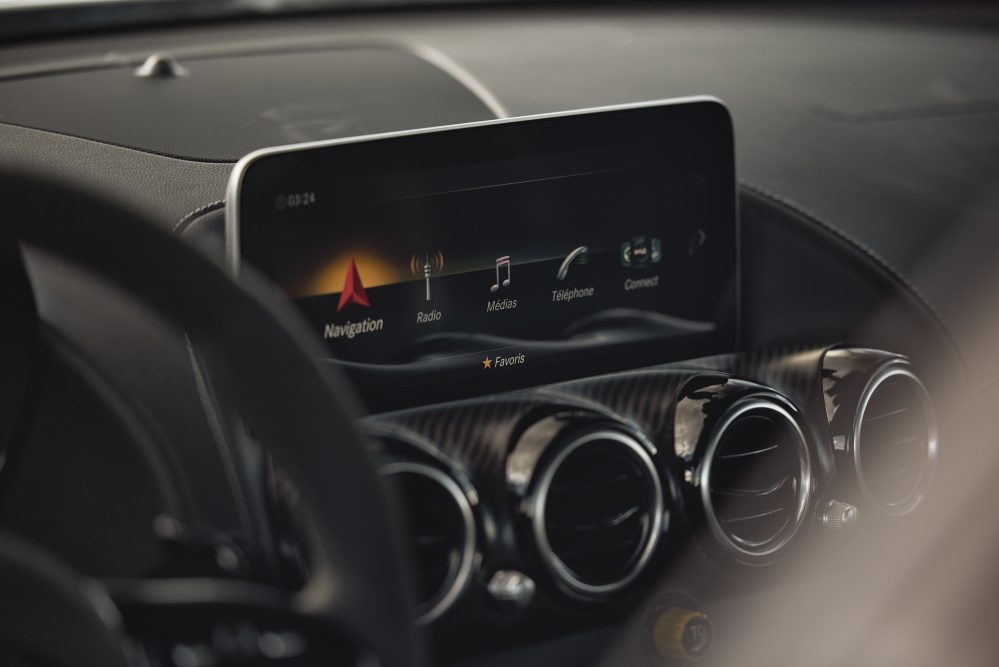 The system also incorporates a BMW-style rotary knob dial instead of the traditional touchpad layout, which vastly improves its ease of operation. Overall ergonomics are good in a GT-R, although I much prefer the new steering wheel-mounted dial to adjust drive modes than the console-mounted buttons. Why are they still there anyway? 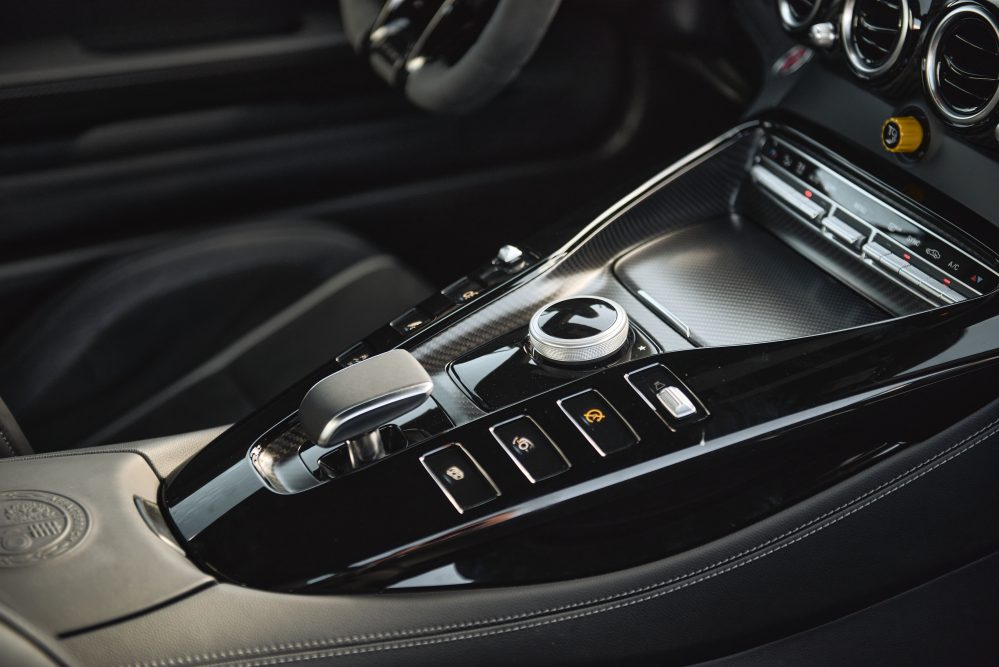 But while the GT R is surprisingly good at being a Mercedes, it still comes with the traditional supercar pitfalls. For instance, the car I was driving was plagued with a rattling rear hatch the moment I’d drive it over road imperfections, and those massive tires quickly lead to tramlining on Quebec’s garbage roads. 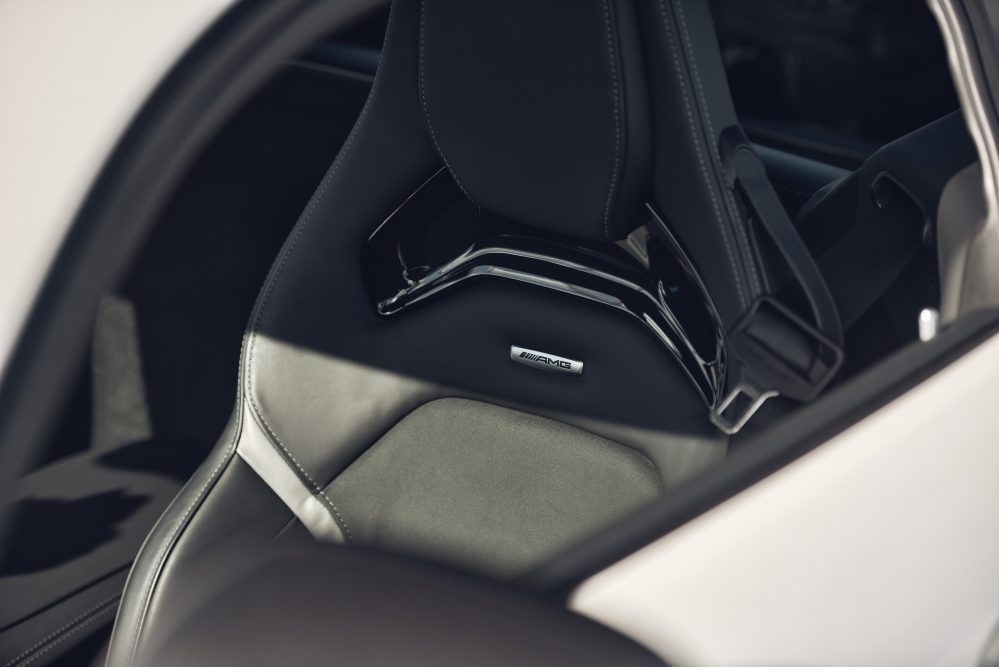 But once I got to the track, all of that was far behind me. Set the AMG GT R to its most aggressive Race setting, and that triple titanium exhaust belches even louder German V8 melodies, backfiring sporadically.

The entire car firms up thanks to its adaptive dampers, while the transmission goes from Clark Kent to Superman within seconds. For maximum results, I highly recommend you set this thing to manual mode, which will grant you access to the car’s quick responding steering-mounted paddle shifters. They’re fantastic. 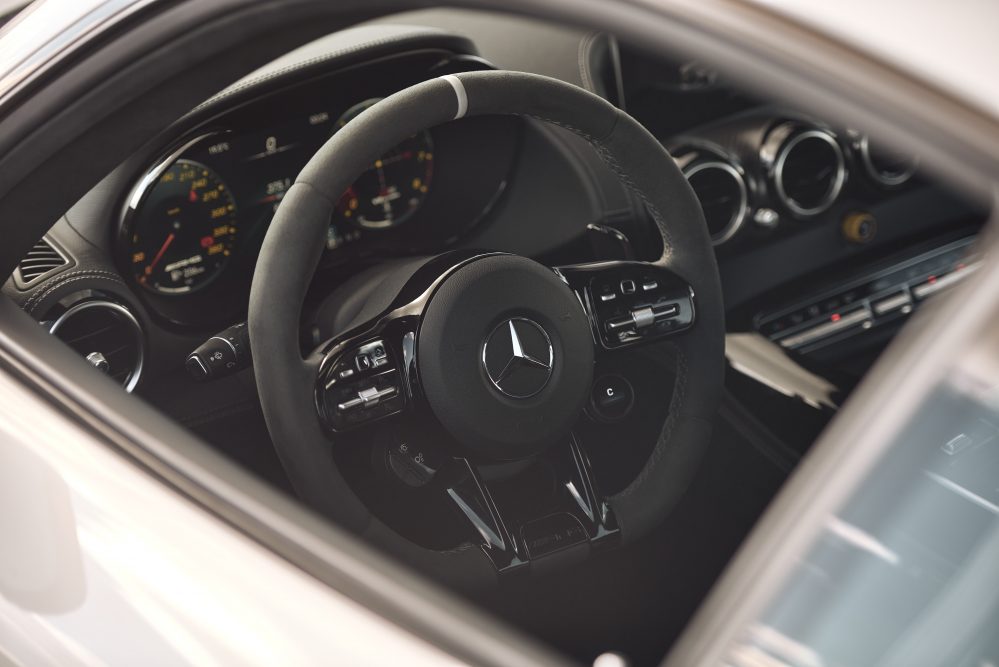 But before you head out to the track, be sure to find you ideal traction control setting. While most cars simply allow you to remove it by holding down the off button, doing so in a GT R will bring you to another level. By way of appears to be a yellow piece of Lego glued onto the dashboard, one can choose between nine different levels of resistance. Considering I’m not a pro racing driver and that Sanair’s banked walls come at you rather quickly after the straightaway, I figured leaving the knob in the middle was the safest way for me to have fun. 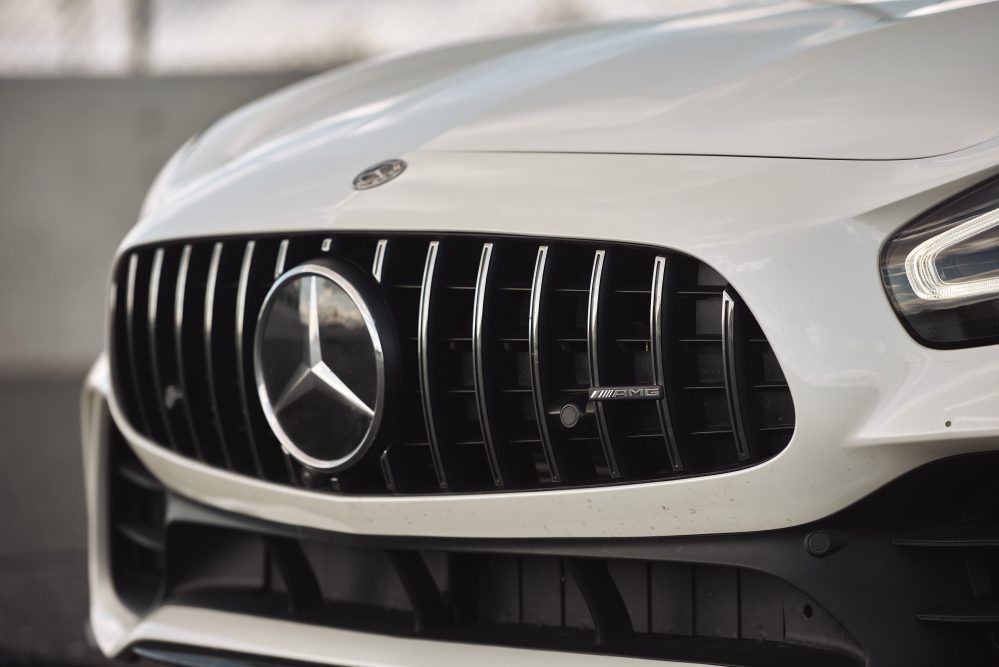 And fun I had! At full steam, the AMG GT R sends a massive wave of power up your spine, charging forward like a freight train in utmost relentless locomotion. But that power is expected. After all, this engine powers everything at Mercedes-AMG and, well, at Aston Martin as well. 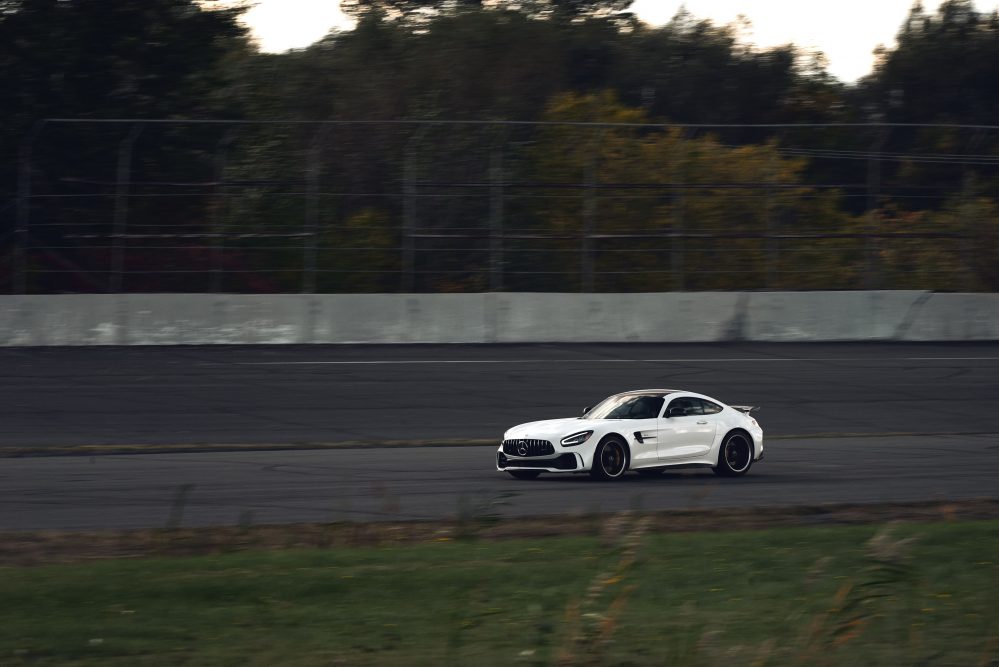 What I wasn’t expecting is how agile and precise this thing is. Granted, it’s still not able to match a Porsche 911 GT3’s surgical immediacy, but it’s impressive how much the car shrinks underneath you the moment you hit an apex. 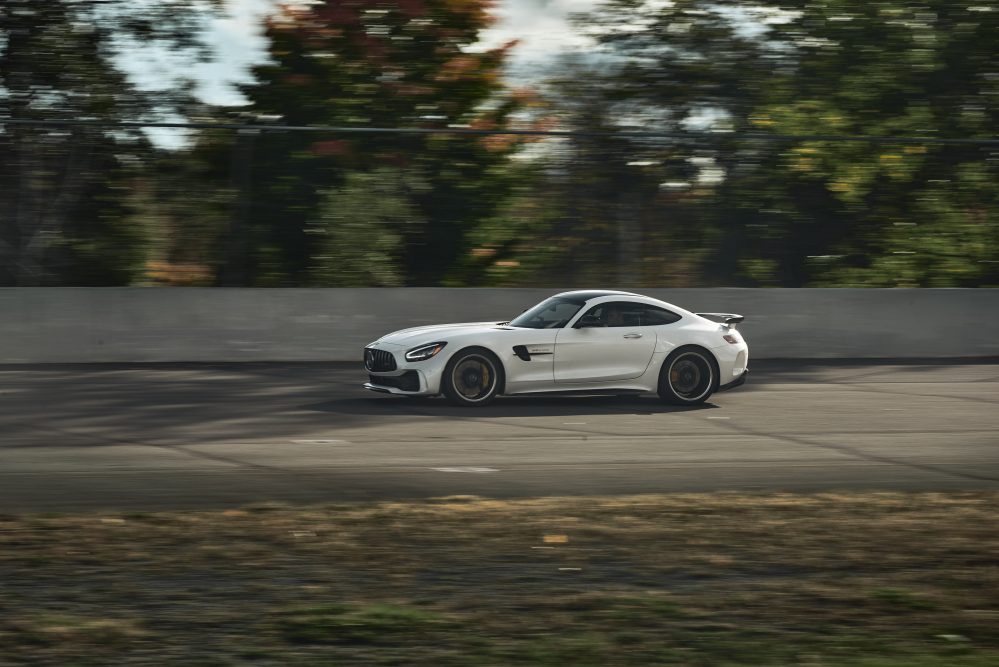 Turn in is razor sharp, the steering wheel is as precise as a scalpel and the level of grip is phenomenal. As a matter of fact, thanks to the traction control setting I had preconfigured, it was rather hard to get the rear end to slide out. A good thing, as I didn’t want to kiss one of those walls with this quarter-million dollar AMG. Hearing that race-tuned V8 roar its way around the track was however a very pleasant experience, throwbacking to Sanair’s glorious Can-Am past. 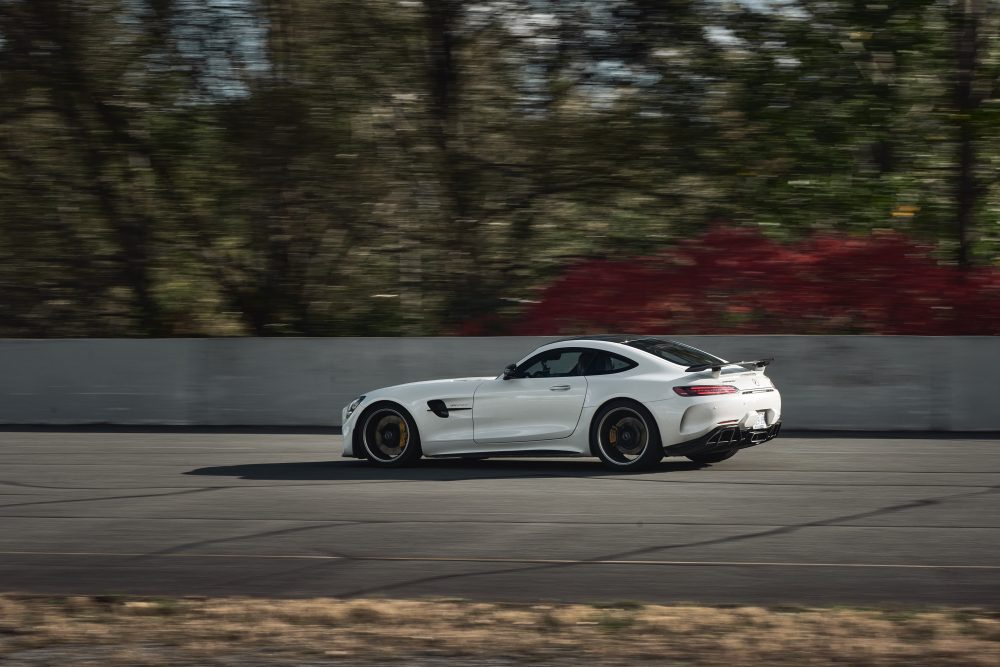 Yes, the 2020 Mercedes-AMG GT R is a toy only the rich can afford, but it also proves that the folks over in Affalterbach can do more than build overpowered sedans and station wagons. If there’s an automobile out there that deserves the “911-slayer” nickname, it’s definitely the AMG GT.