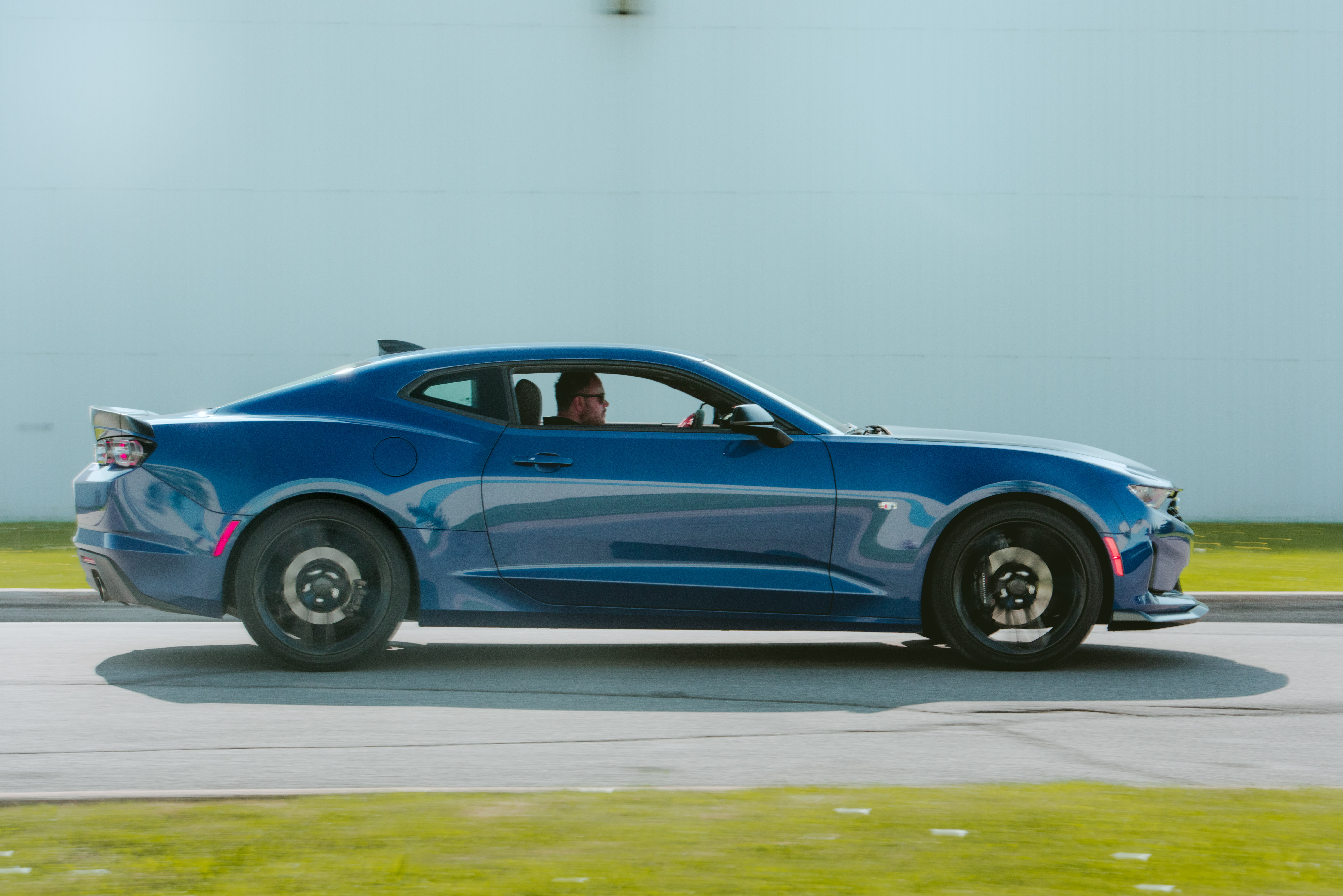 The 2019 Chevrolet Camaro 1LE Turbo is a car that carries a tremendous amount of stereotypes on its shoulders. On one part, it’s a Camaro; a cliché American sports car often associated with mullet-wearing douchebags dressed in ketchup-stained wife-beater shirts. On the other hand, this Chevy is powered by a four-cylinder engine, the anti-Christ of the American muscle car as we know it. So how exactly does it get away with it?

Playing In A Different League 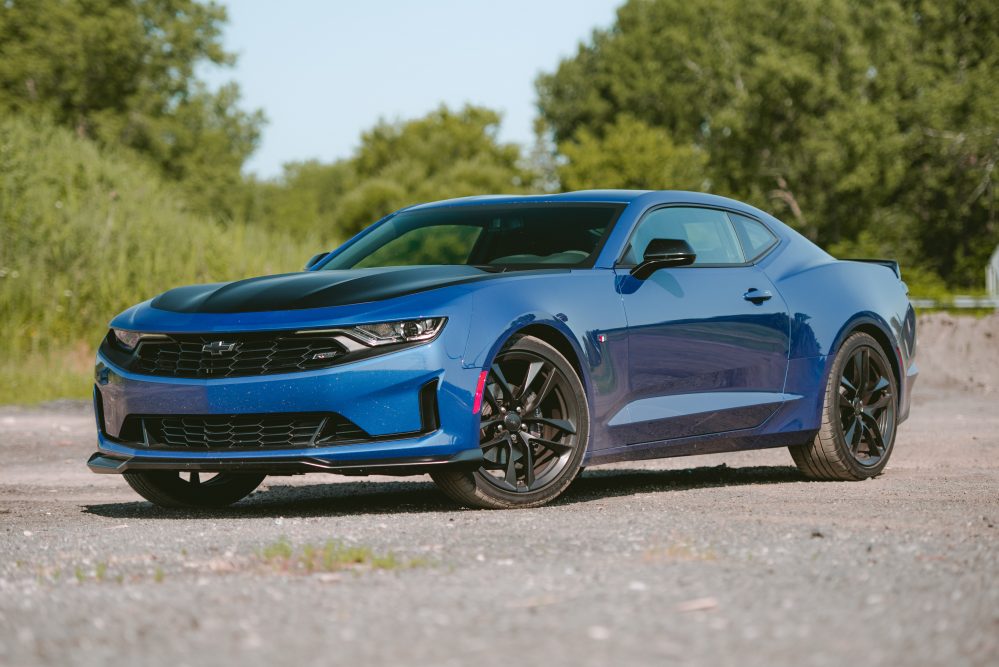 The thing is, the 2019 Chevrolet Camaro 1LE Turbo isn’t here to impress the big boys down at the 1320. It cares not that its exhaust doesn’t rumble to the tune of a small-block iron lump of a V8. That’s because this GM was built to take on an entirely different type of sports car.

You see, the current-generation Camaro may look weird, but it’s the most athletic of the American trio of iconic pony cars. While the Dodge Challenger remains true to the classic muscle car formula, the Camaro, along with the Ford Mustang, has evolved into a full-fledged sports car capable of trading punches with Europe’s best. 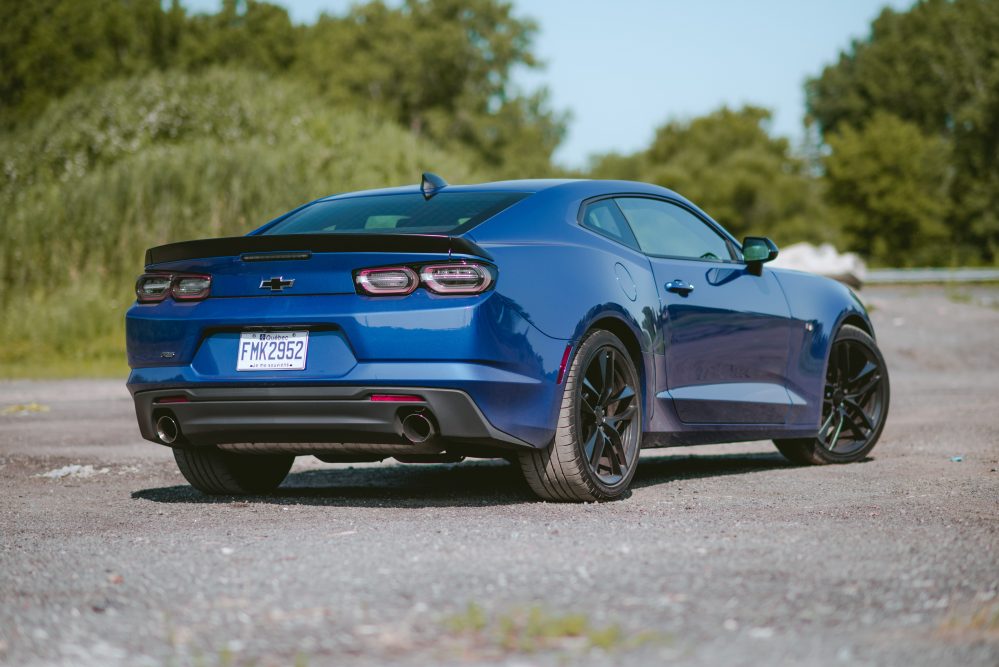 Don’t believe me? Hear me out: the last time a Chevrolet Camaro ZL1 1LE – the most powerful, track-focused variant – went through the Nurburgring, it finished its lap in 7:16.04. To put things into perspective, that’s faster than a Nissan GT-R, a Ferrari 488 GTB, and the previous-generation Porsche 911 GT2 RS. Get it? 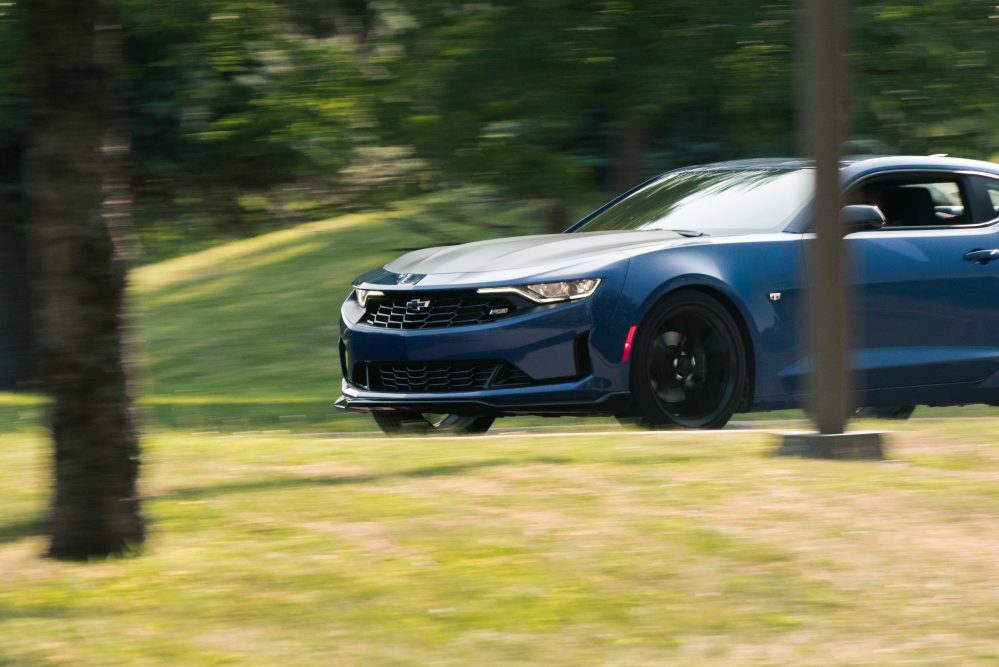 Now, what if Chevrolet brought the 1LE package, which essentially adds chassis reinforcements, larger sway bars, a stiffer suspension, beefier brakes, sticker tires and a limited slip rear differential, to its bargain-basement four-cylinder Camaro? The end result is, it must be said, a wonderful thing; a cheap track beast that kicks hot hatchbacks in the balls, or a genuine performance tool that gets you more performance for your dollar than a Nissan 370Z or a Subaru BRZ / Toyota 86. 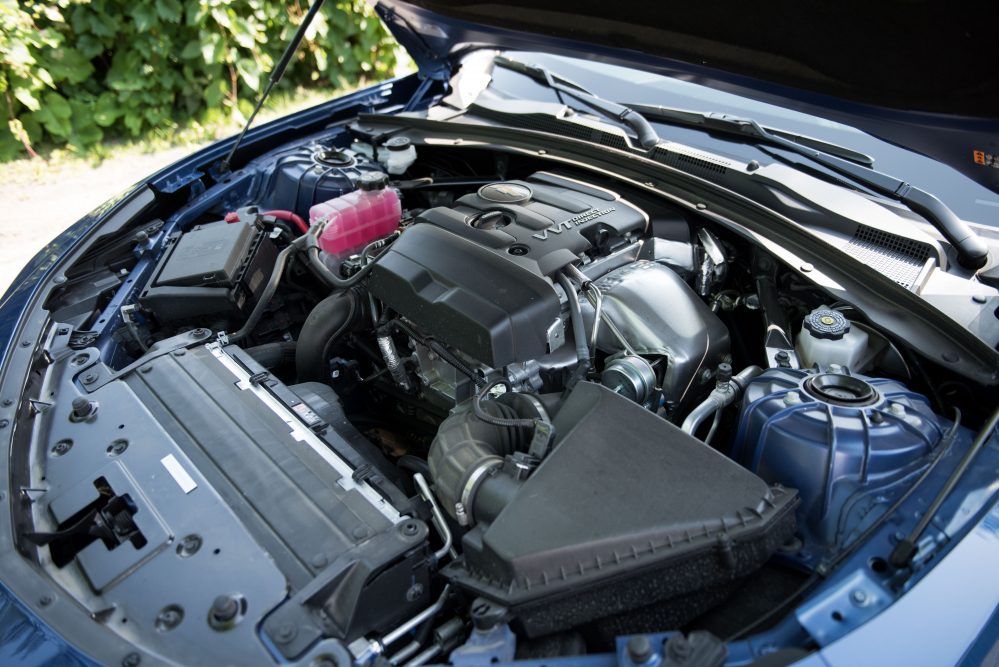 Power is essentially unchanged from a base Camaro. The turbocharged 2.0L (LTG) four-pot still makes a healthy 275 horsepower and 295 lb-feet of torque. Acceleration from 0 to 100 km/h is claimed by GM in under 5.5 seconds, and the only available gearbox for all 1LE Camaros is a Tremec-sourced six-speed manual.  Damn  right  it  is. 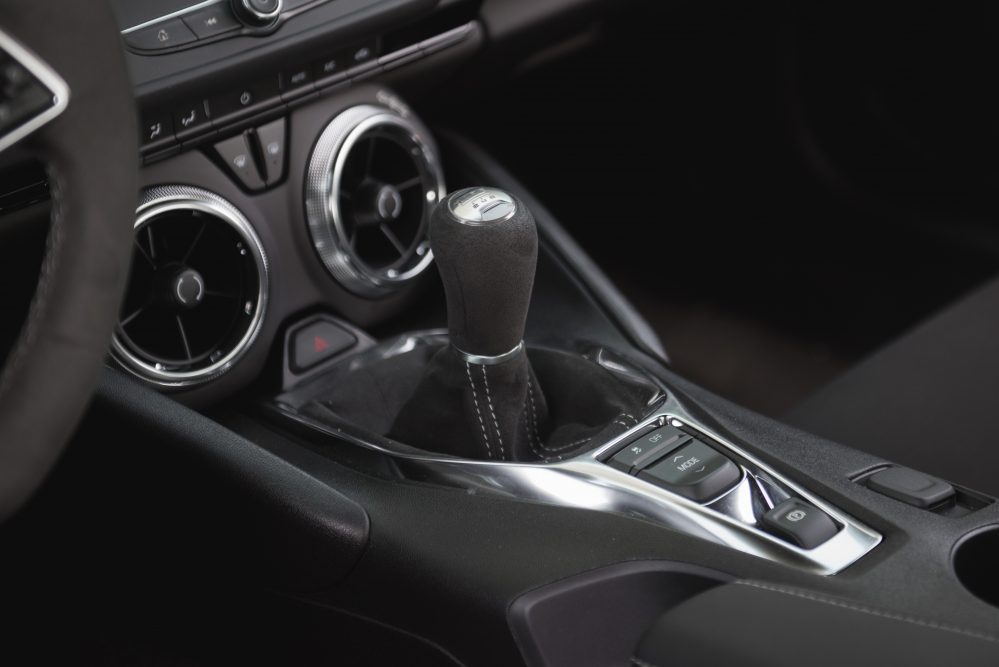 Now get this: my tester, fitted with all the performance-enhancing toys mentioned above stickered for no more than $37,385. That’s roughly the same price as a well-equipped Mazda MX-5. 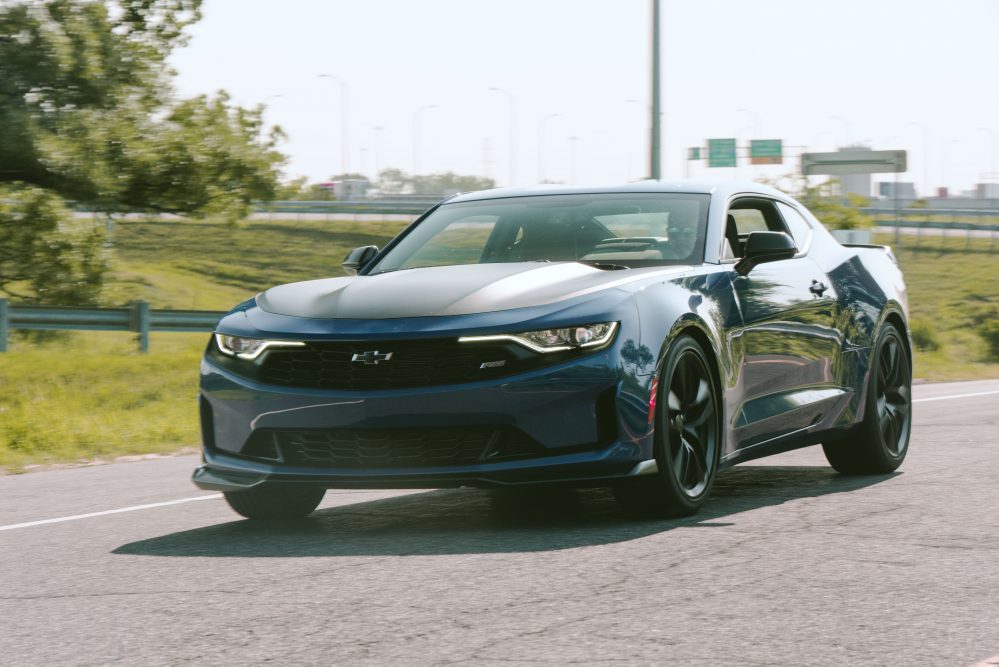 I’ll get the elephant out of the room right away: I really don’t like the look of the 2019 Chevrolet Camaro 1LE. Even with its blacked out hood, spoiler, front lip and 20-inch wheels, I’m sorry, but I can’t find this design coherent. It’s almost as if Chevrolet stopped giving  shit  while  drawing  it.  At  least  it  retains  the  pretty  silhouette  of  the  fifth-generation  car. 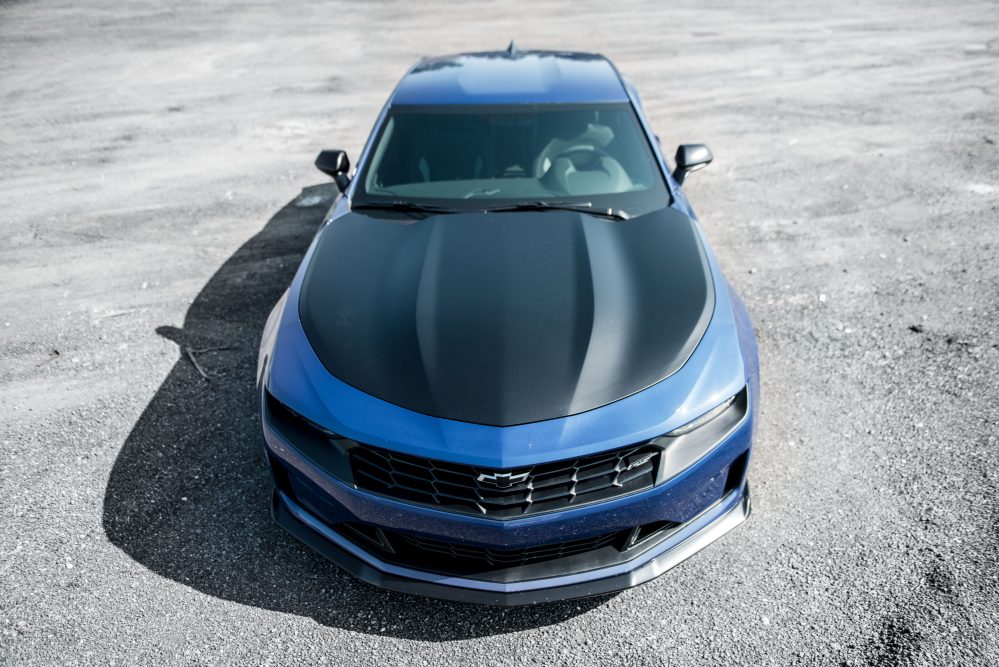 I also continue to believe that the Camaro is one of the worst sports cars to see out of. Because of its high cowl, thick C pillars and long hood, you constantly feel like you’re sinking in this car, making it a handful to park in a crowded city. The rear seat is basically non-existent, there aren’t many places to store things like your phone or your wallet, and the passenger seat doesn’t even get a handle to hold onto. 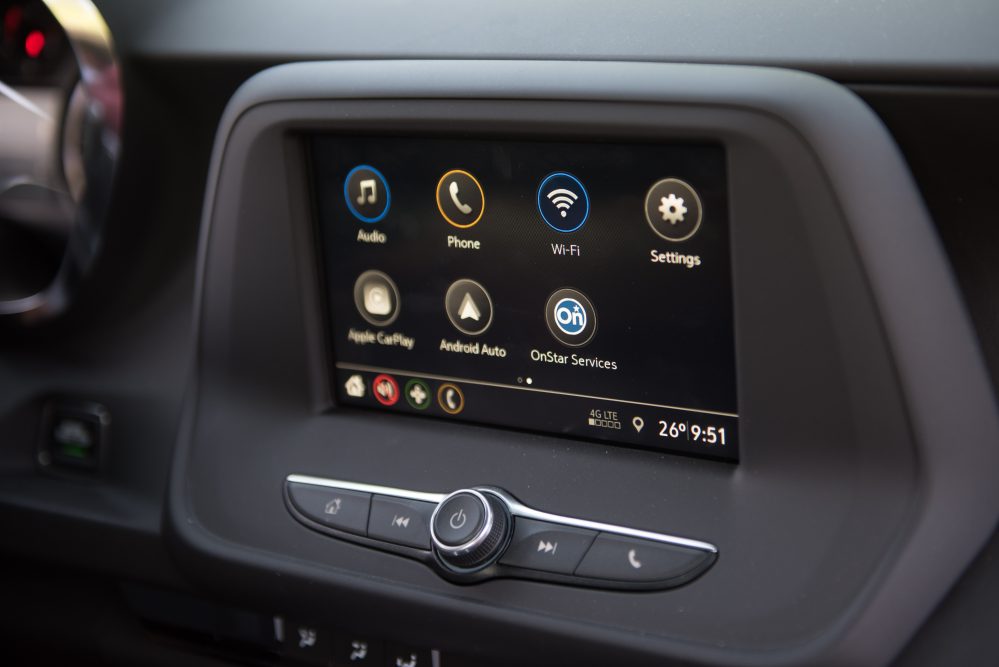 Interior packaging, then, is not the Camaro’s best asset, I much prefer spending time in a Mustang. I’m also not a fan of the inclined screen for the infotainment system. During the day, all it does is reflect the centre console, or your hand as you’re rowing through the gears. 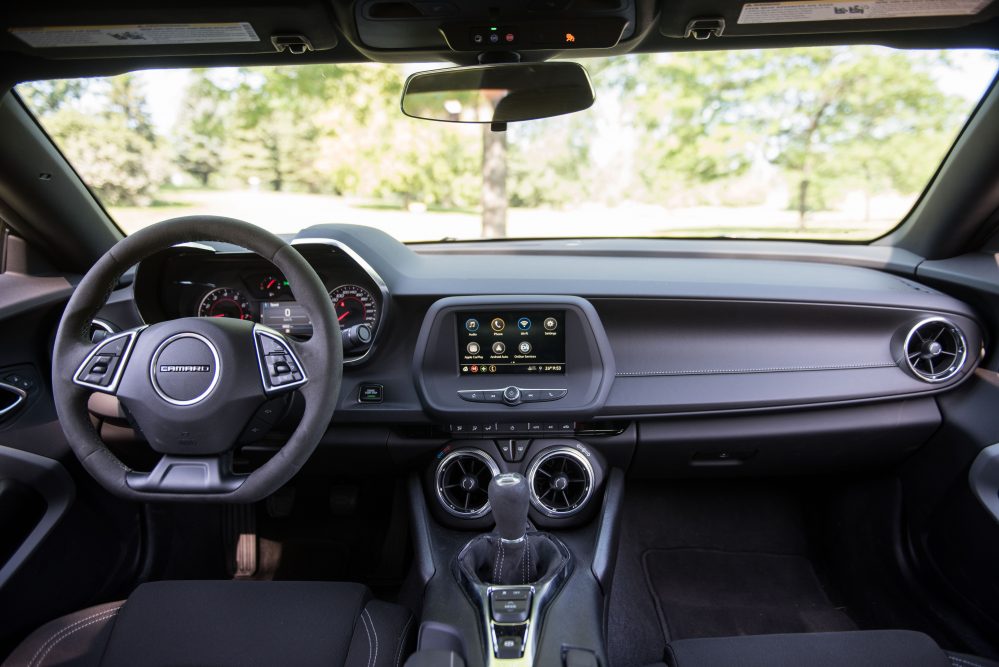 That said, Chevrolet’s MyLink interface remains one of the best infotainment systems in the business. It’s simple, straight forward, quick to react, and the large icons make operating it while driving super easy. There’s also standard onboard wifi (subscription required)! How cool is that? It allows you to stream your Spotify playlist without busting your data plan. 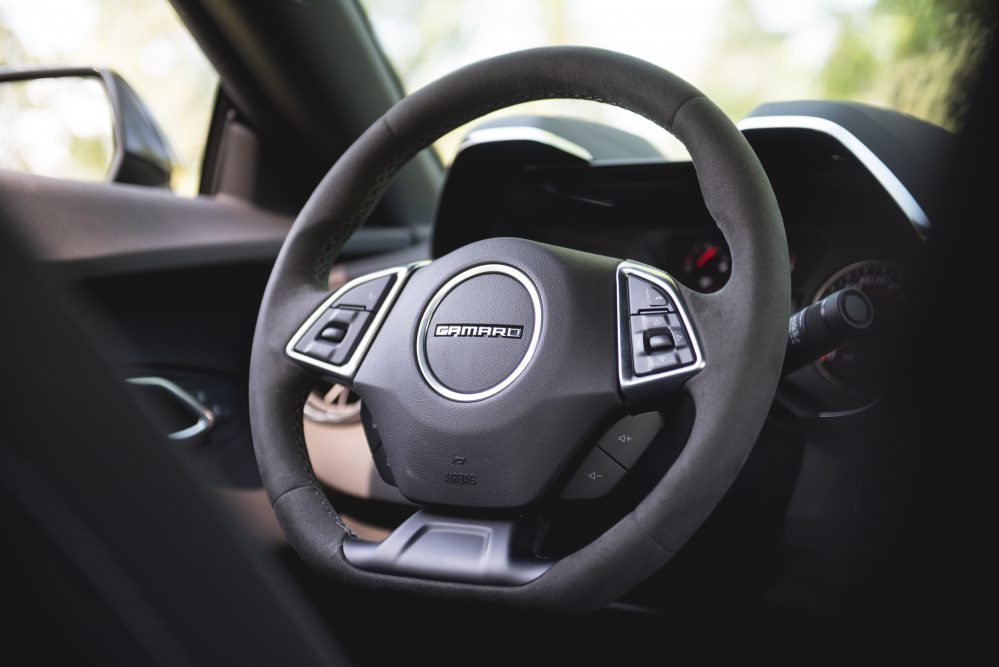 What you really need to know, though, is that all of the Camaro’s awful interior letdowns quickly dissipate the moment you depress its light, yet springy clutch pedal to engage the short-throw gear lever. The 2019 Chevrolet Camaro 1LE feels technical even before you begin driving it. All you need to do is turn its suede-covered steering wheel  to know  you’re  driving  something  special. 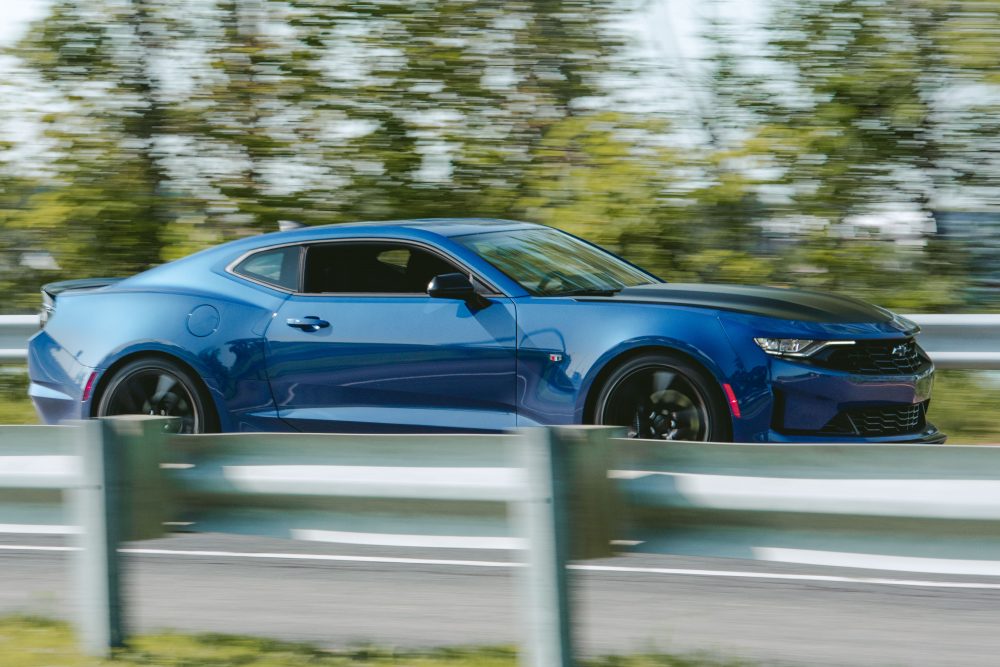 Based on the Alpha platform, the same as the Cadillac CTS, ATS and all-new CT5, this Camaro feels light on its feet, ready to pounce, ultra well planted on the road and reacts with urgency to the slightest steering inputs. The last time I felt a chassis so alive was in the Honda Civic Type R. Plus, the use of a four-cylinder engine versus a V6 or a V8 not only means GM engineers were able to push the engine further back in the engine compartment, improving the car’s overall weight balance, the damn thing also weighs a whole 358 pounds less than a its V8-powered stablemate. 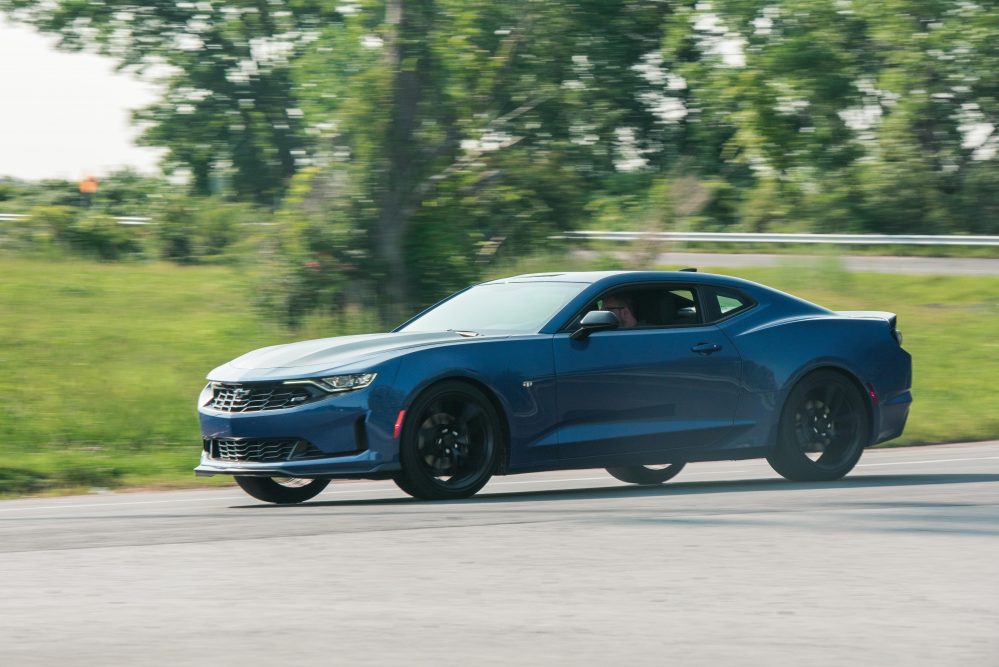 The end result is a super-nimble sports machine that sends enough thrills down your spine to spawn a big fat smile on your face. Throw this thing into a corner hard, and I mean hard, and that front end just grips, with the entire car grabbing onto the tarmac like a spider stretching its legs. Steering feel is also up there among the best performance machines I’ve driven. There’s just an overall sense that this chassis was built to handle so much more power, which allows you to push the baby Camaro ten-tenths without fear of ending your life. 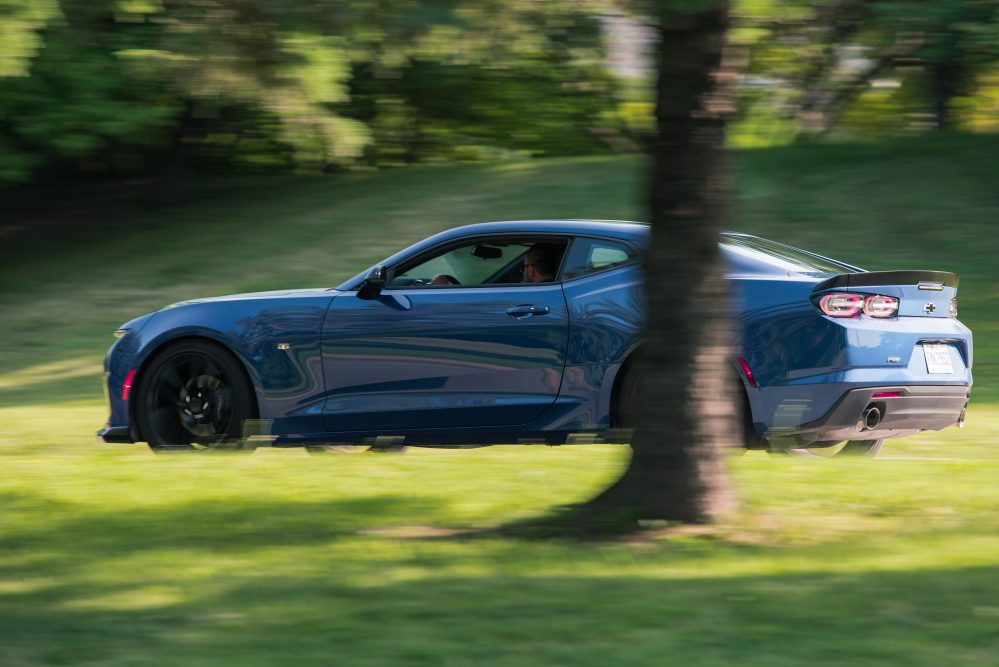 Plus, the four-cylinder engine generates more than adequate power. Its only big flaw is the way it sounds. There’s basically no character at all in the way it sings its music, sounding muffled and way too civilized for a car that looks this mean and fast. 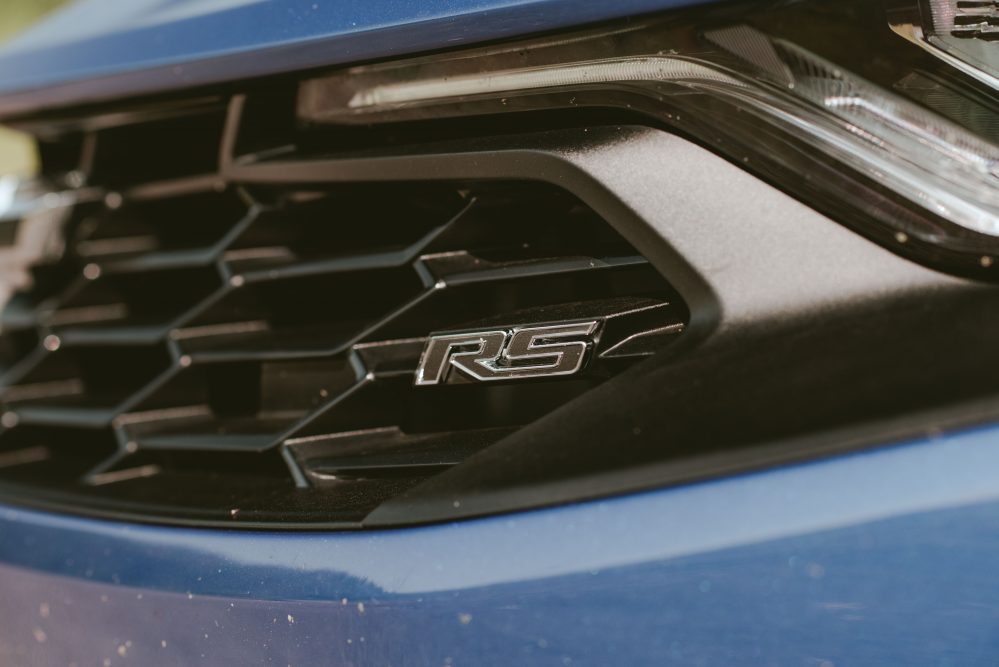 But once boost kicks in at 3,000 rpm, there’s a solid and smooth rush of power all the way to around 6,000 rpm, where everything suddenly dies. Yes, this engine heavily relies on forced induction to do its thing, and there’s nothing refined or hair-rising about the way it puts the power down. But it gets the job done in a clean and efficient manner. In many ways, it reminds me of the BMW 330i. 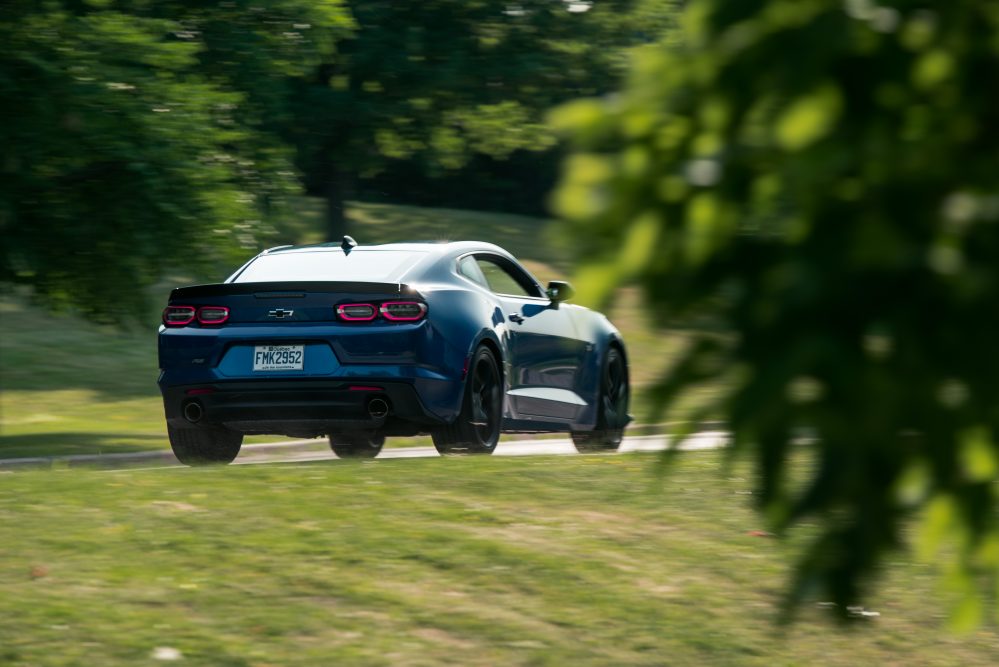 You guys know how much I love affordable performance. That’s why I adore cars like the Ford Fiesta ST or the Golf GTI. In this form, the Chevrolet Camaro suddenly becomes a tremendous performance bargain, one that will allow you to put down serious numbers at the track without destroying your wallet. Plus, I got an 8.5L/100 km consumption average with this thing, and I wasn’t exactly feathering the throttle. 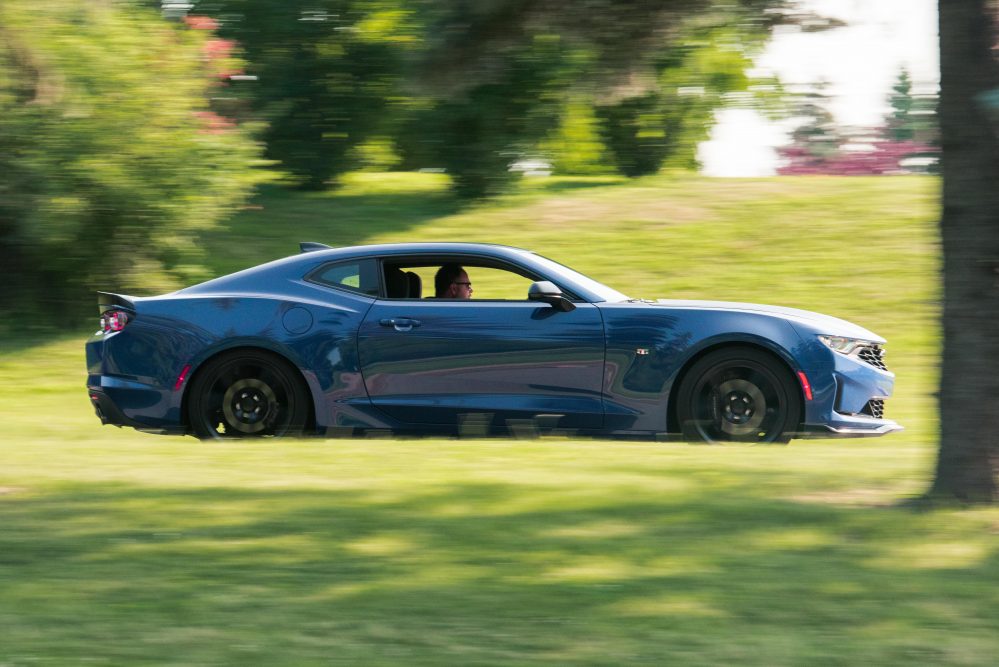 If you can get past the dorky face and mullet stereotypes, there’s a lot to like about the 2019 Chevrolet Camaro 1LE Turbo. It proves that you don’t need a V8 to make a fantastic American sports car. As a matter of fact, in this price range, I can’t think of another automobile that will give you this much performance.