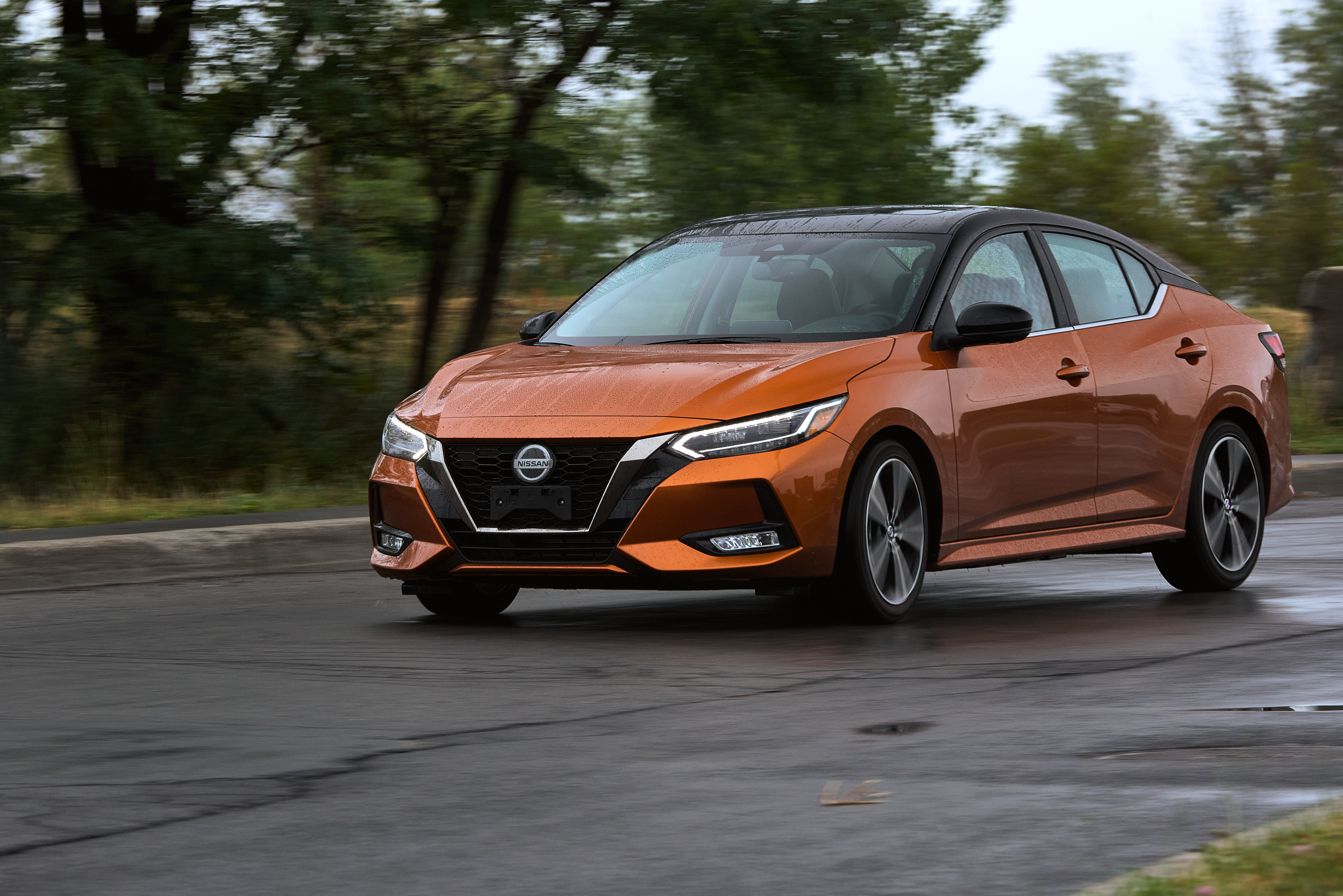 The 2020 Nissan Sentra could be a solid competitor to the new Mazda3, if only it offered more variety, more flavor and, well, a bit more power. Still, that doesn’t prevent this new Sentra from hitting hard. I honestly didn’t expect it to be this good. Nissan’s new Sentra is accomplished enough to bring hope to small cars and the entire brand. 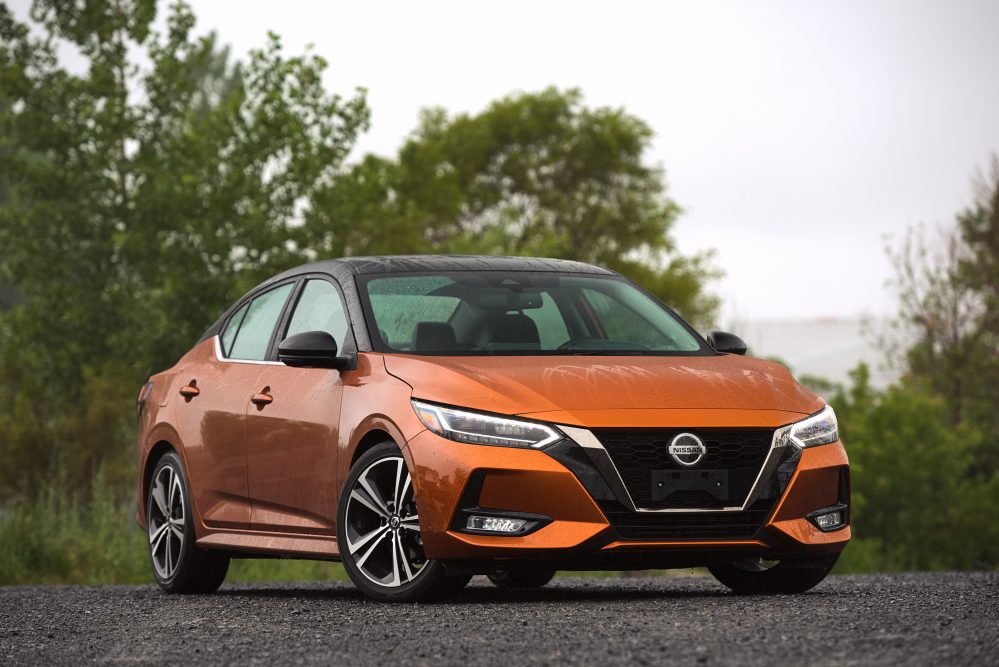 Perhaps the 2020 Nissan Sentra’s most noteworthy feature is its design, which not only makes it look like a tiny Altima, but appears a lot more expensive than it actually is. I’ll get back to pricing in a bit, but I find this new Sentra quite attractive. I love the stance too. It looks low, wide and sporty. I’d consider buying one if looks were my only criteria. 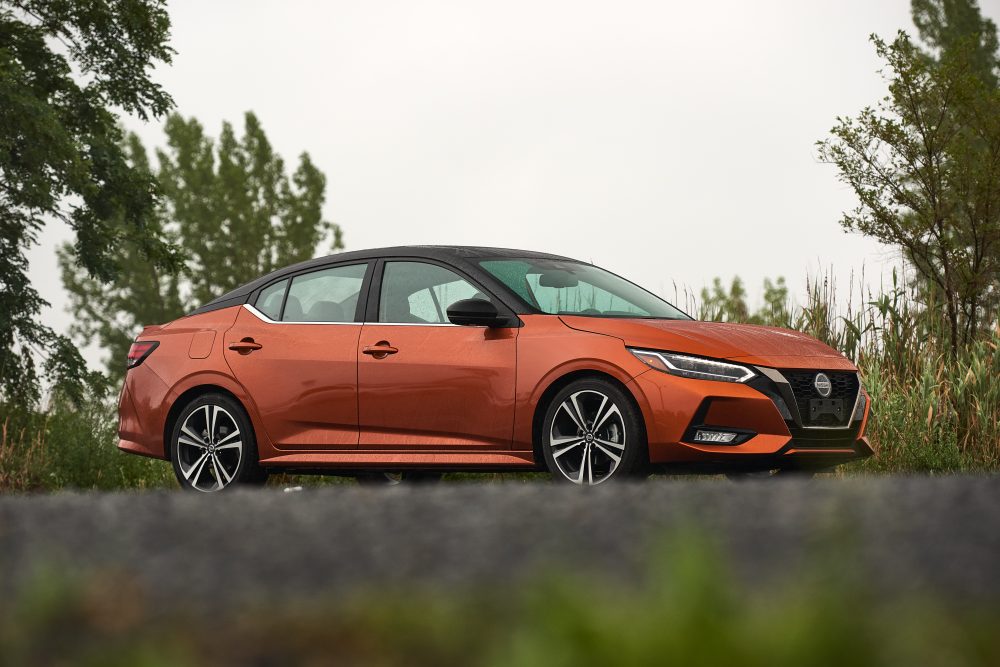 I say the Sentra brings hope to small cars because people are sadly slowly walking away from compact cars and flocking to SUVs by the masses. But, somehow, the Sentra is still doing alright. I mean, Nissan sold more than 180,000 in the U.S. and Canada alone last year. Even if that car had gotten old and not very competitive, people were somehow still buying it. 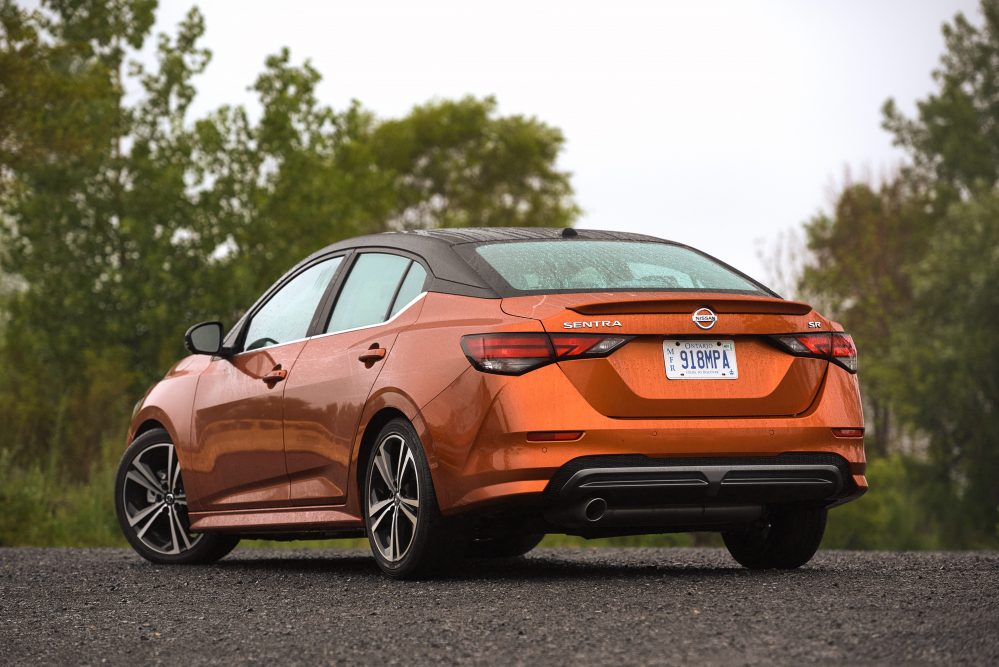 Because the Sentra’s success has always been its cheap price, low running costs and above average reliability. Except, with the Koreans now dominating the value-focused small vehicle segment, how does Nissan, a Japanese brand, continue to compete? 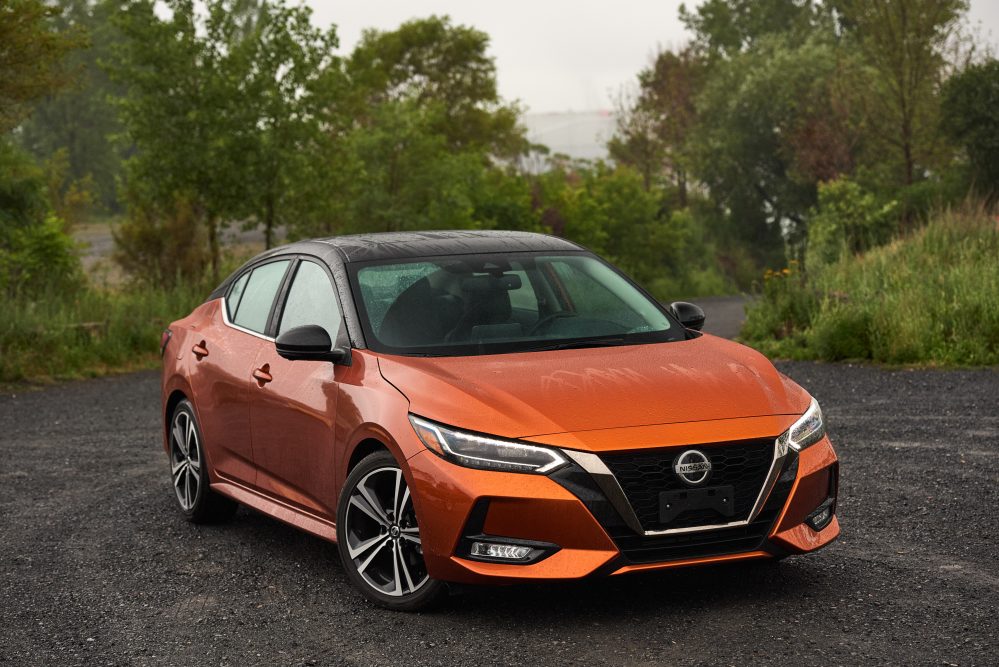 Bringing the car a tad upmarket certainly helps. It’s a strategy many carmakers are doing at the moment, mainly Mazda, who’s succeeding the most at it. The idea being of selling a car as a premium model, but also at a more affordable price point than traditional luxury brands. 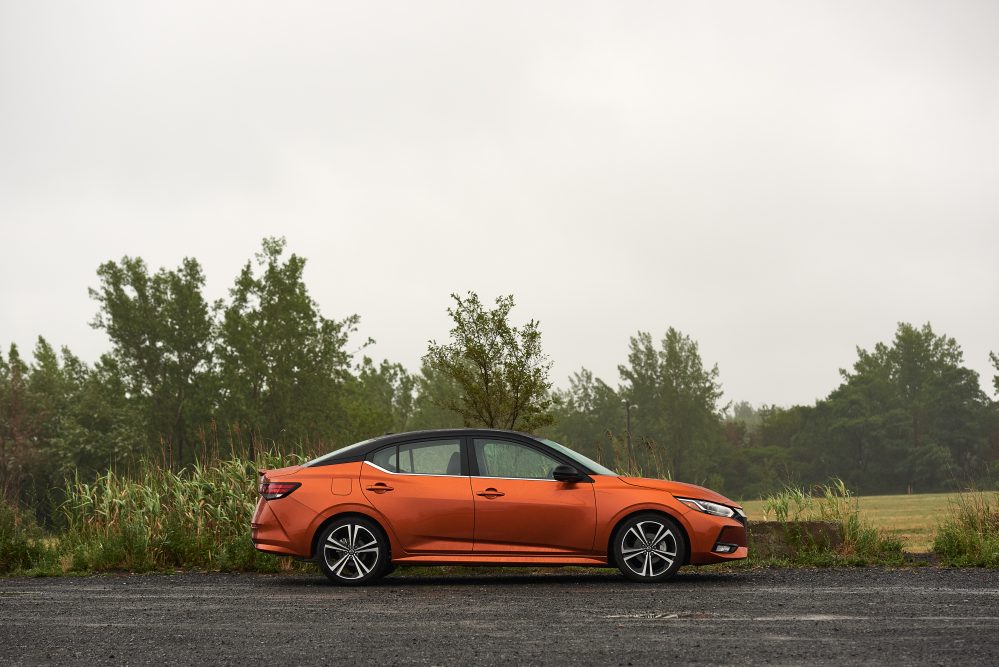 I’m not saying the 2020 Nissan Sentra is a luxury compact car like a Mercedes-Benz A Class or even an Acura ILX, far from it. But it feels significantly more upscale than its predecessor, allowing it to redefine the mainstream small car segment. It also helps that the Sentra is entirely new, riding on a heavily updated version of Nissan’s existing CMF-C platform. The result is a more modern, longer, wider and generally more refined Sentra. 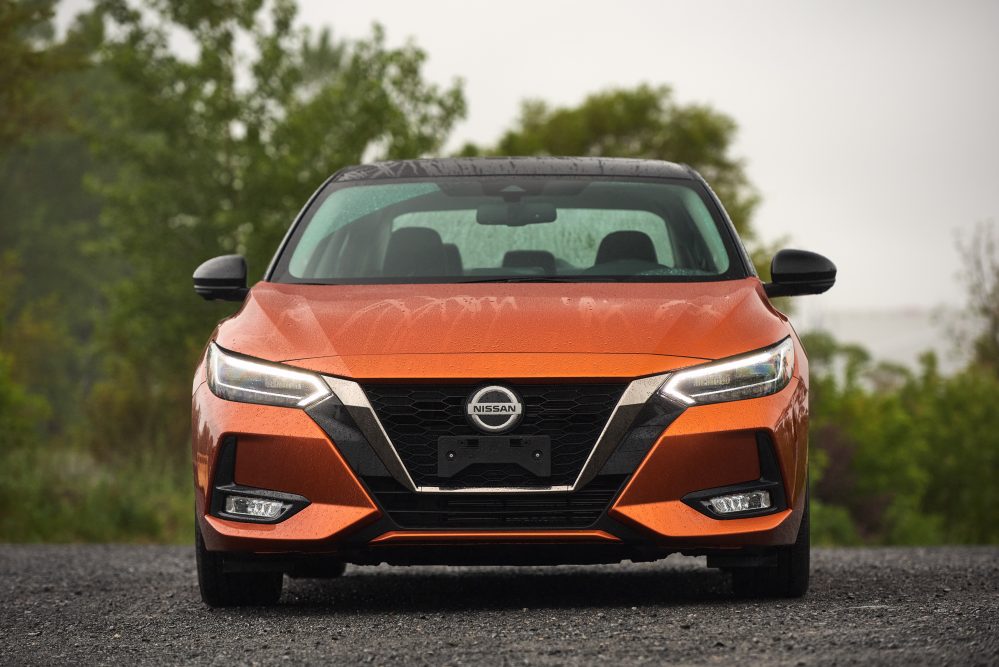 Power is however a bit of letdown, with very little flexibility in drivetrain packages. All cars are powered by a 2.0-liter inline four good for 149 horsepower and 146 lb-ft of torque, which significantly lags behind even the Honda Civic’s base engine. 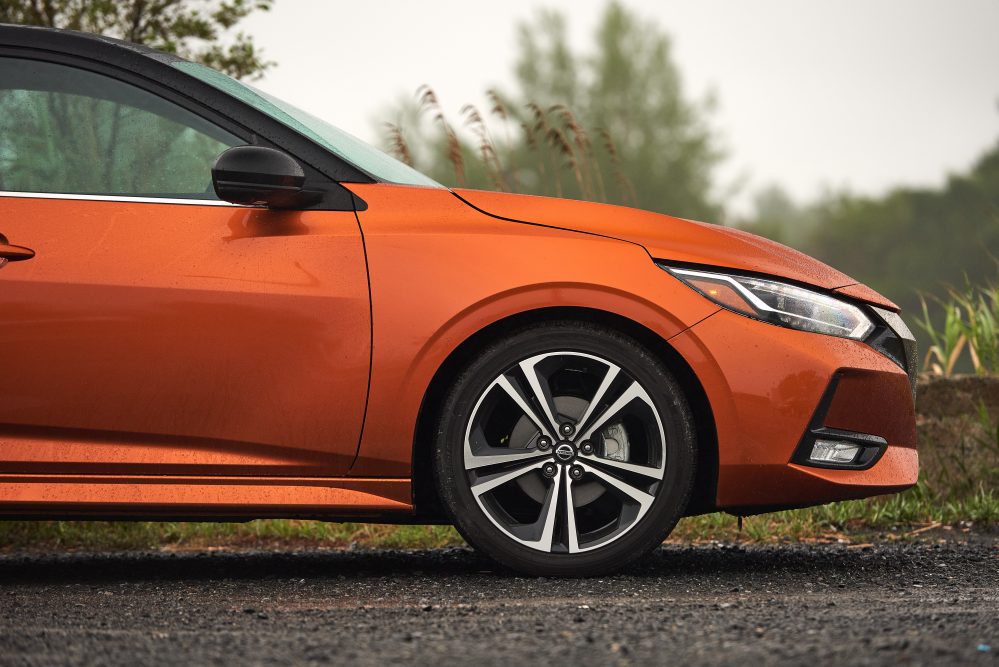 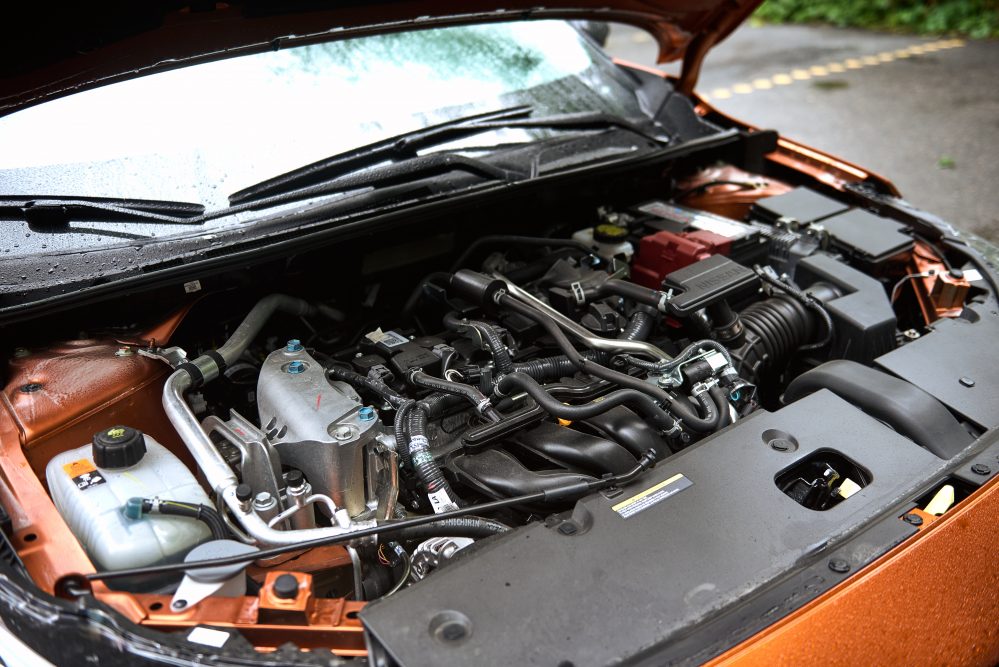 There’s a bit of hope though, as the Sentra can still be had with a six-speed manual transmission. But there’s a catch, as that gearbox is only available on the bargain basement S model, which only offers three body colors and not many available options. All other Sentras come fitted with a continuously variable automatic gearbox, or CVT. There’s no all-wheel-drive, no optional turbocharged engine, or no electrified version in sight. 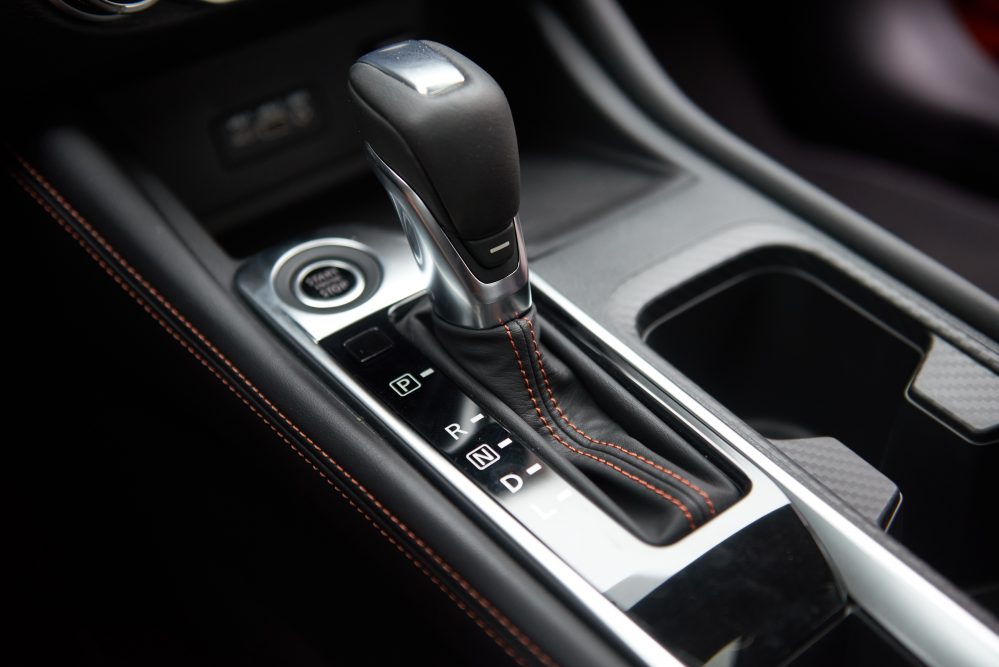 The good news, however, is even a fully loaded 2020 Nissan Sentra SR Premium like the one you see here will never cost you more than 30 grand. As it sits, with that blacked-out roof, sporty look and larger wheels, my tester stickers for $27,783. 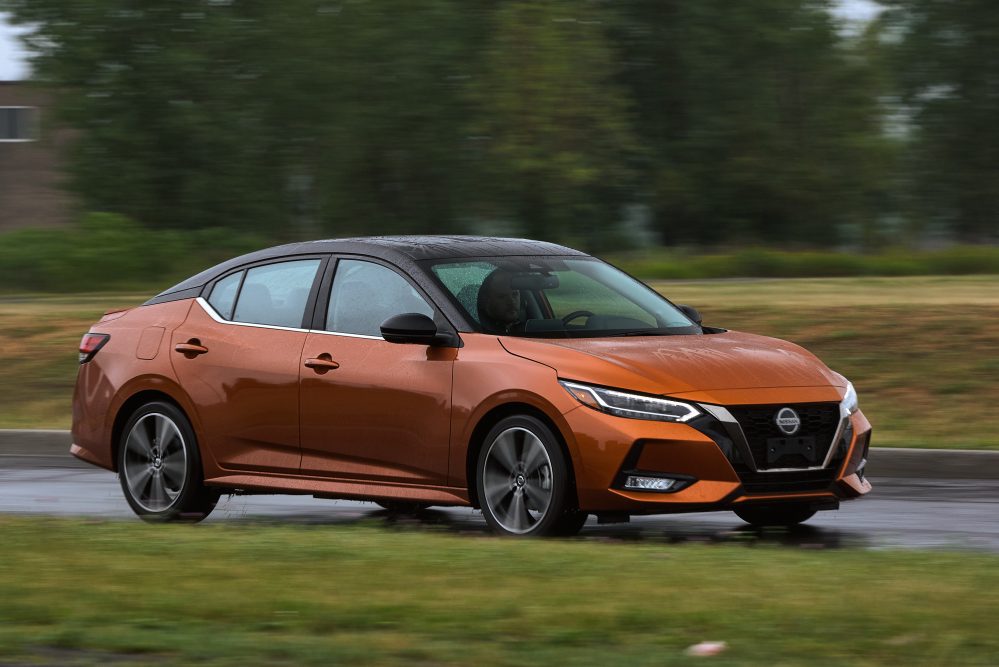 The 2020 Sentra feels premium, solid and drives great; arguments you wouldn’t necessarily associate with its predecessor. The car handles flat, the suspension is compliant over road imperfections, road noise is kept low and steering is refreshingly precise. Car overall feels zippy and engaging to drive. 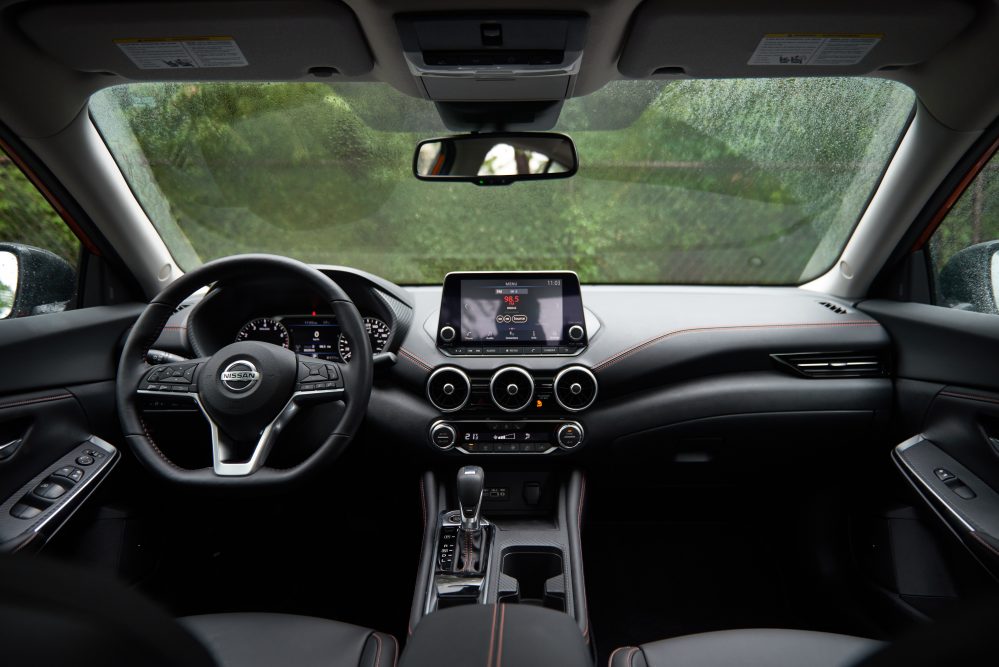 Nissan also nails interior design in this segment. There’s a coherent sporty theme here, one that blends well with the car’s exterior and makes could use of cabin ergonomic. Seat comfort is spot on, so is overall ergonomics. I’m not a fan Nissan’s in-dash menu as it’s where you also remove many of the car’s safety toys. But I do love the red stitching and circular air vents. Nissan achieves them better than Kia does. In the Sentra, they almost look like they should be in an Audi. 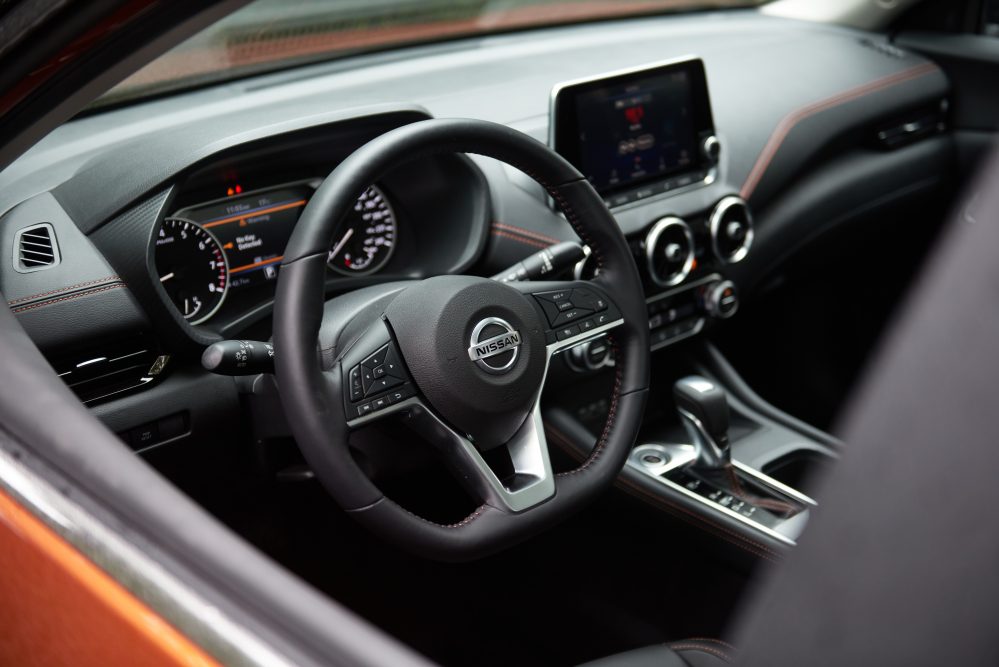 The infotainment system gets the job done, and I appreciate the new physical buttons that were added to the system, but the interface itself has the traditional Nissan lazy, clumsy feel. It just feels outdated. Connects quickly to your Android or Apple device, however. 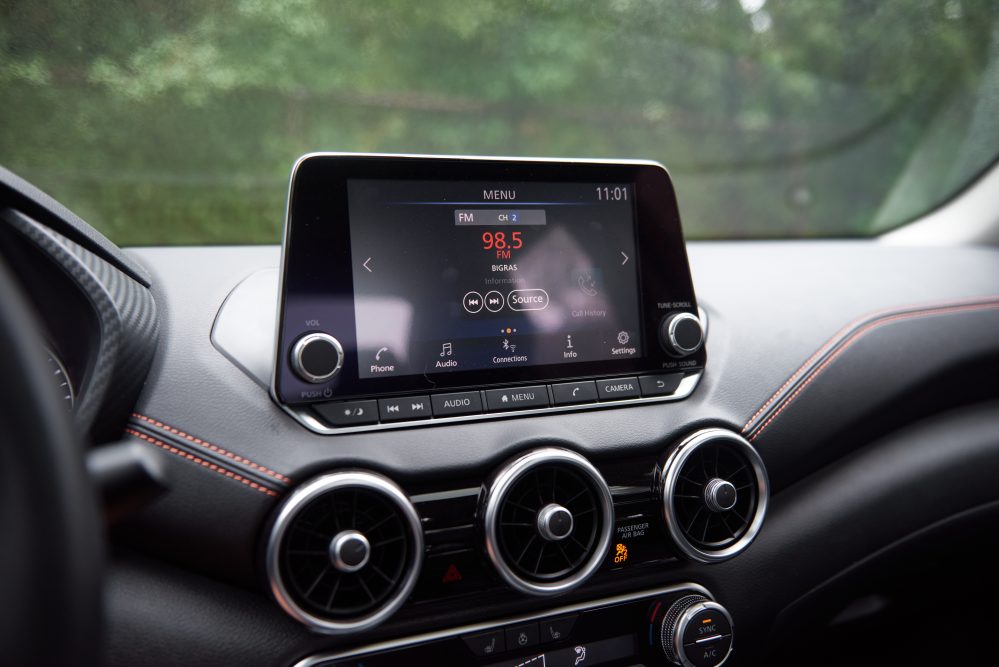 You guys know what I think of CVTs, but in some cases, i.e. Honda, they’re actually great. But I still haven’t warmed up to Nissan’s setup after all these years. I don’t know if it’s because it harvests all the traditional CVT stereotypes, or because it never really allows you to have fun with it, but I find it kills a lot of the character of some of Nissan’s vehicles. I felt this in the Maxima, and sadly, the Sentra has it too, as if transmission is slowly killing the car. 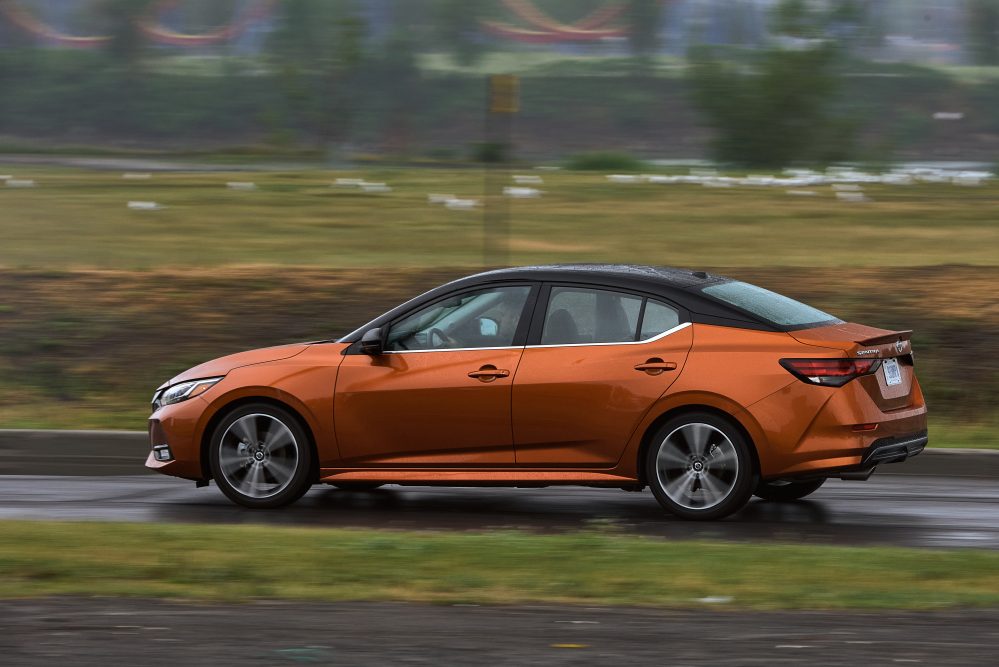 Ok, I get that the CVT helps for fuel economy and possibly emissions. Oh and this Sentra sure delivers. It’s easily possible to hang in the low 6L/100 km range if you’re smart with it. But come on, Nissan, why isn’t there anything fun here? 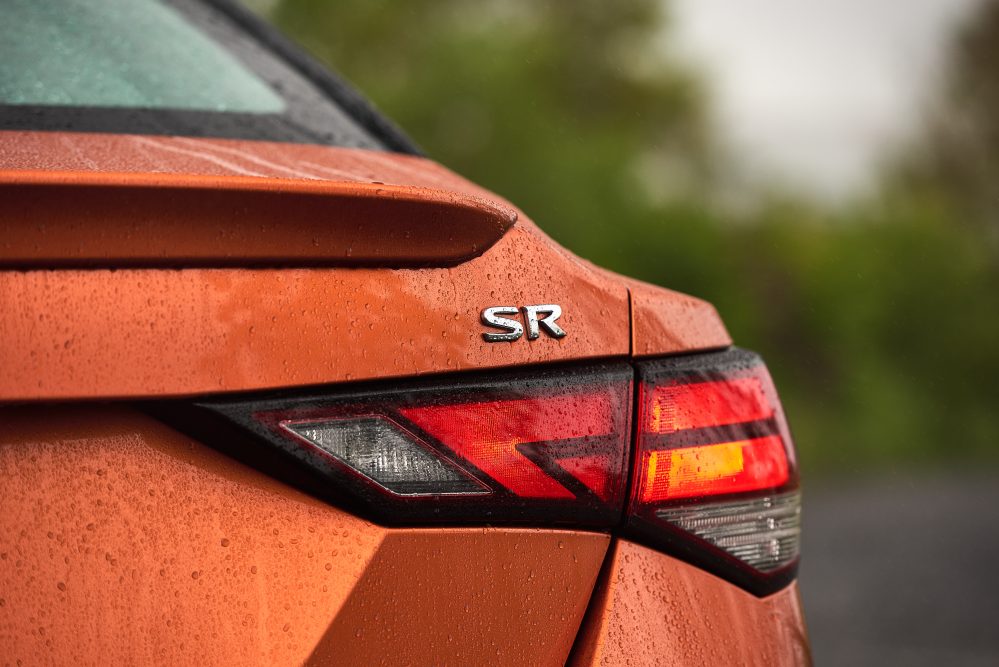 Then, there’s the engine it’s bolted onto it, which makes you yearn even more for a stick and three pedals. It’s an ok engine for daily driving. Gets the Sentra up and going ok, but it never feels spirited, particularly quick nor engaging. Sounds kind of lame too. Acceleration from 0 to 100 km/h gets done in the low eights, which is better than the old one, but still a full second slower than a base Civic. Nissan needs to offer an upgraded engine option here. Where’s the SE-R? 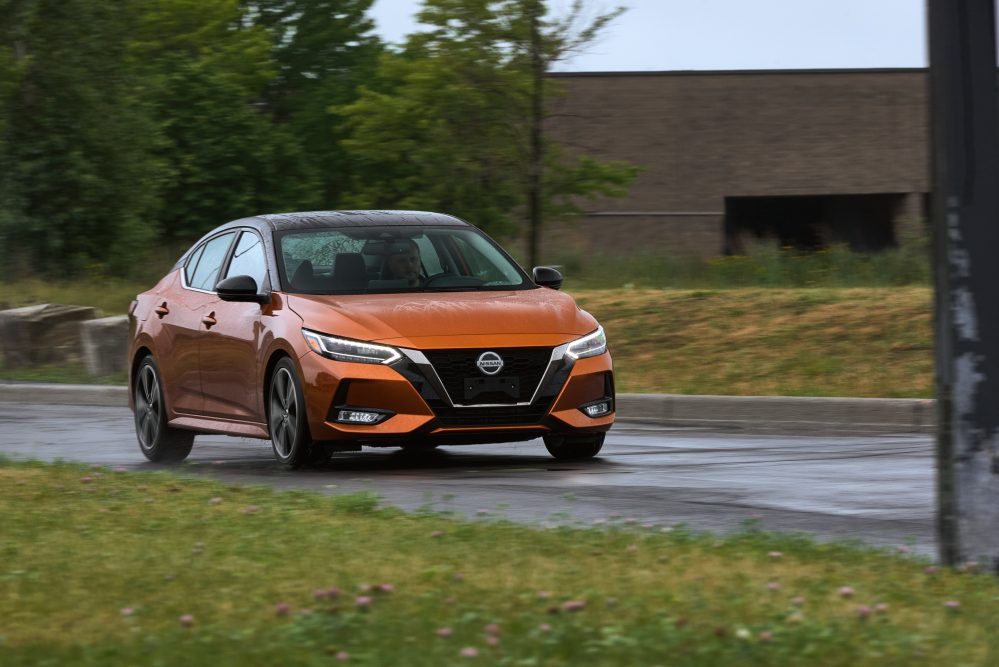 Otherwise, the driving experience is frankly great. The Sentra rides smooth, feels all grown up and has plenty of space and handy storage. Rear seats offer ample room for this class of cars, except headroom is a tad squeezed for tall people due to the roof’s shape. The car’s splendid styling also slightly affects total cargo space, from 427 to 396 liters. Overall, it’s a well executed package. 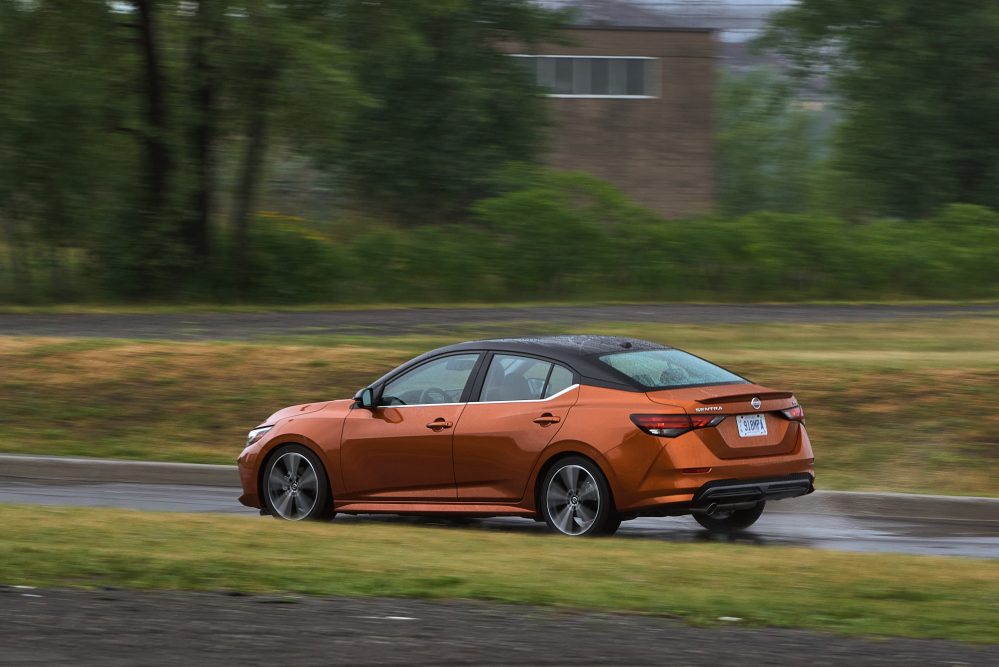 Final verdict: the 2020 Nissan Sentra is good looking and cool again, and that honestly feels fantastic. It even drives great, offers a lot of a high-end features at an affordable price point, and pursues its promise of being a cheap, frugal and reliable small car for the middle class. All it’s missing is a little bit more variety and, more importantly, more oomph to truly be a segment leader.

Review of the 2020 Nissan Sentra by William Clavey
Compact Cars