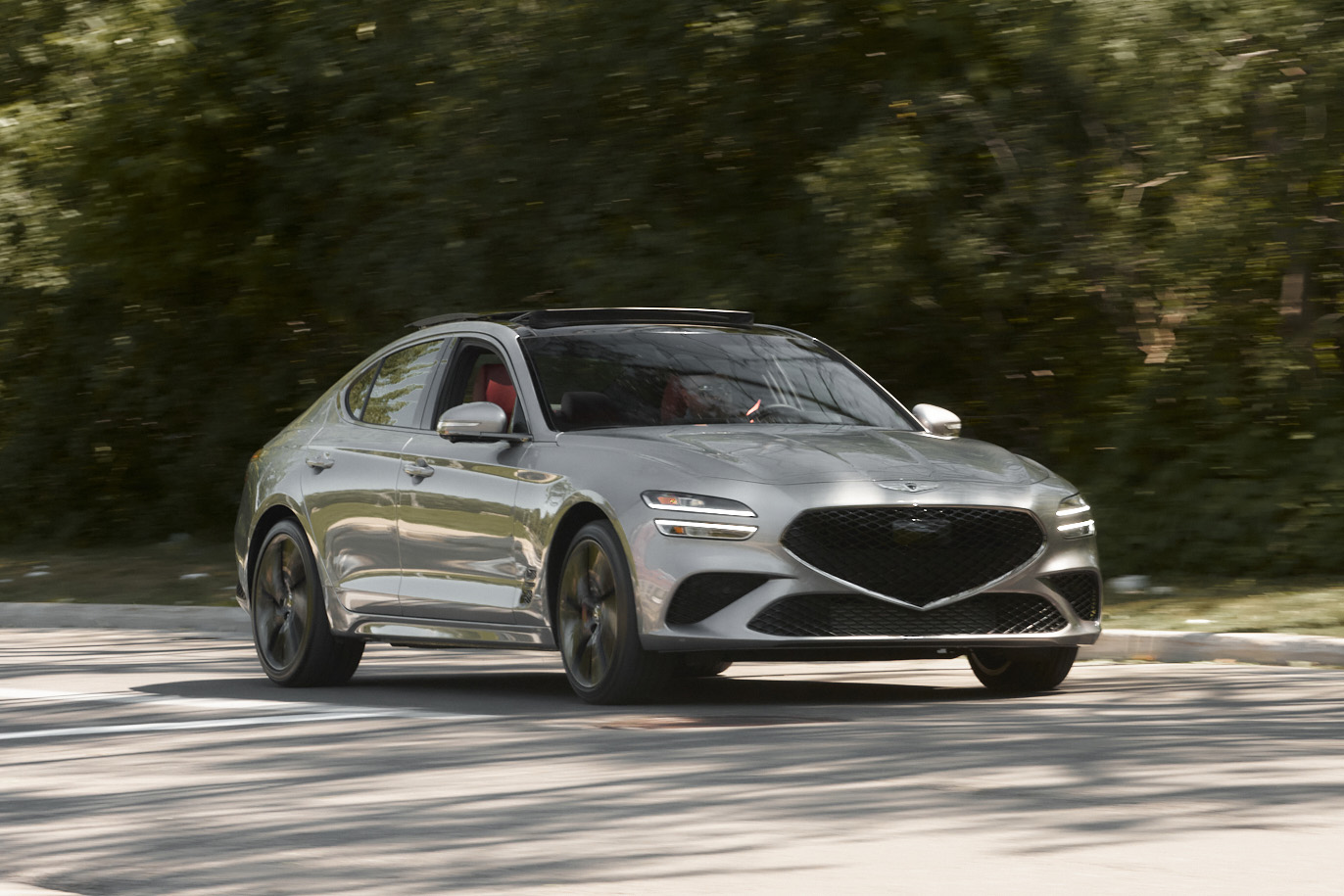 The 2022 Genesis G70 got an important facelift this year, and, well, also got much better. Mind you, I was already a fan of the original car when I drove it in 2019. Back then, I said that it had the potential to disturb the German elite. Now, thanks to this facelift, it has slotted its way among the best. Hate all you want, this glorified Hyundai is one hell of a sport sedan. 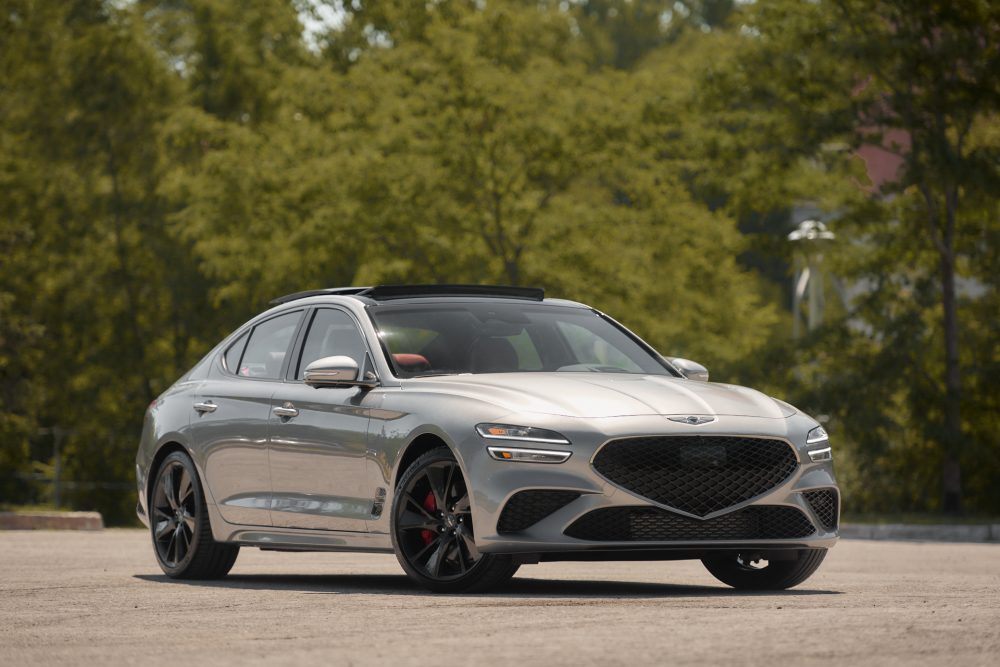 The sport sedan segment has been copied more than once, and it’s fair to say the Germans invented it. But the 2022 Genesis G70 somehow mimics it while still coming through as its own unique thing. The facelift also gives the car a much more confident demeanor, courtesy of the now trademark Genesis hexagonal grille and split LED headlights. The goal, of course, is to allow the G70 to be more in tune with the brand’s latest offerings, things like the G80 and GV80 SUV. 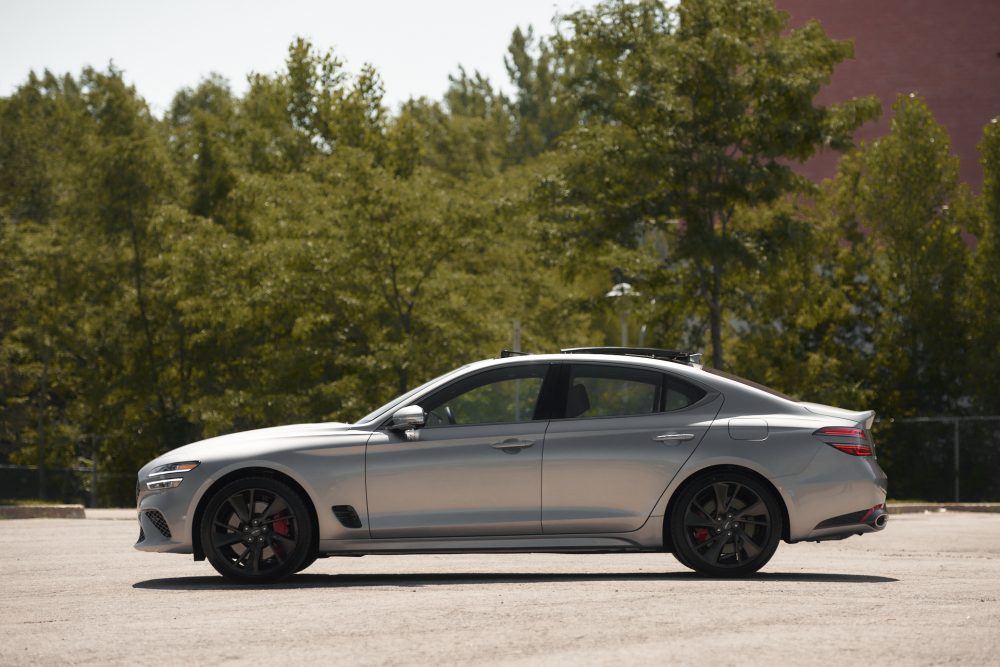 The rear end was also massaged to be more in tune with the corporate look. The car offers new wheel packages and color combinations, inside and out. It still rides on the same platform, because it’s still the same car, but there’s an available limited slip rear differential now that’ll grant you a drift mode. The suspension was recalibrated to be, according to Genesis, even more responsive. Active exhausts and a few updated interior amenities like a new infotainment system, are also part of the changes, as well as finer, more upscale cabin materials. 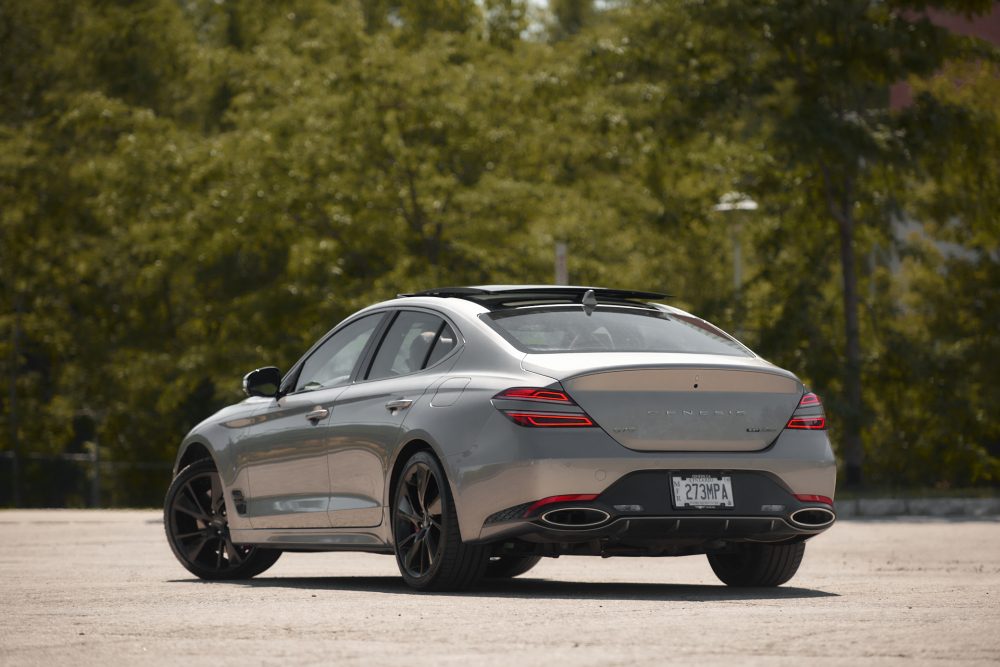 Power still comes from a choice of two available gasoline engines. Entry level cars make do with a 2.0-liter turbocharged four good for 252 horsepower and 260 lb-ft of torque, but my tester had the optional twin-turbocharged 3.3-liter V6. It pumps out a more interesting 365 horsepower and 376 lb-ft of torque. Both engines are mated to an eight-speed automatic gearbox. Sadly, the manual transmission is now gone because nobody was buying it (go figure). In Canada, all G70s now come standard with all-wheel drive. 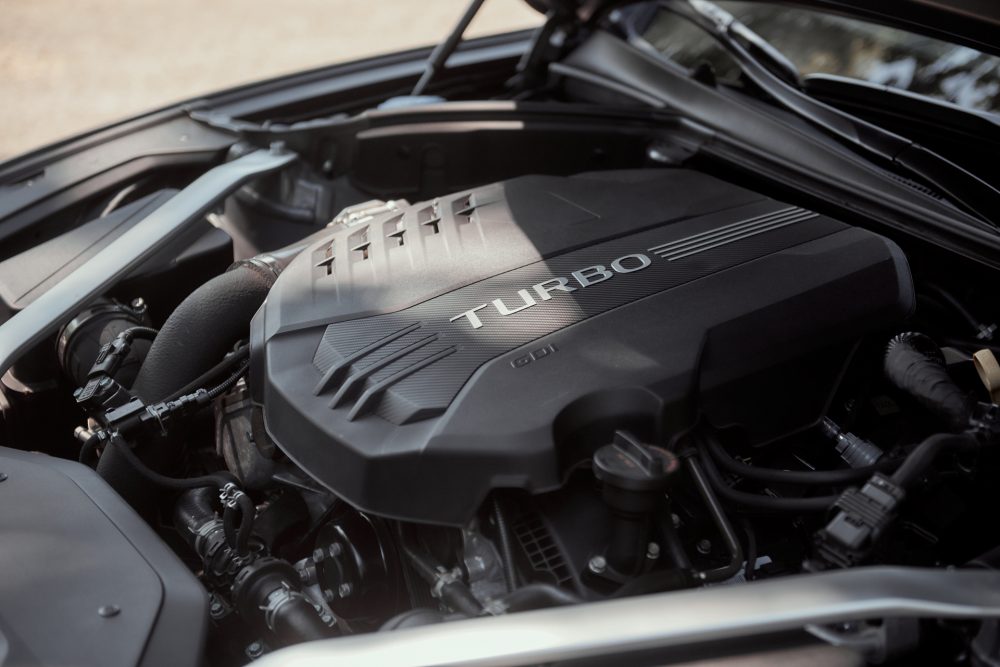 Genesis still distinguishes itself from other luxury brands through its all inclusive pricing strategy. There aren’t really any options or packages for these cars, just trim levels with one fixed price. Cars can be purchased in Genesis stores, online or even in specialized boutiques located in malls and airports. The vehicle can then be shipped to a destination of your choosing at no extra cost. Once you own the car, you’ll get a five-year valet service while under warranty. In other words, Genesis comes and picks it up for you and lends you another vehicle while your ride is being serviced. 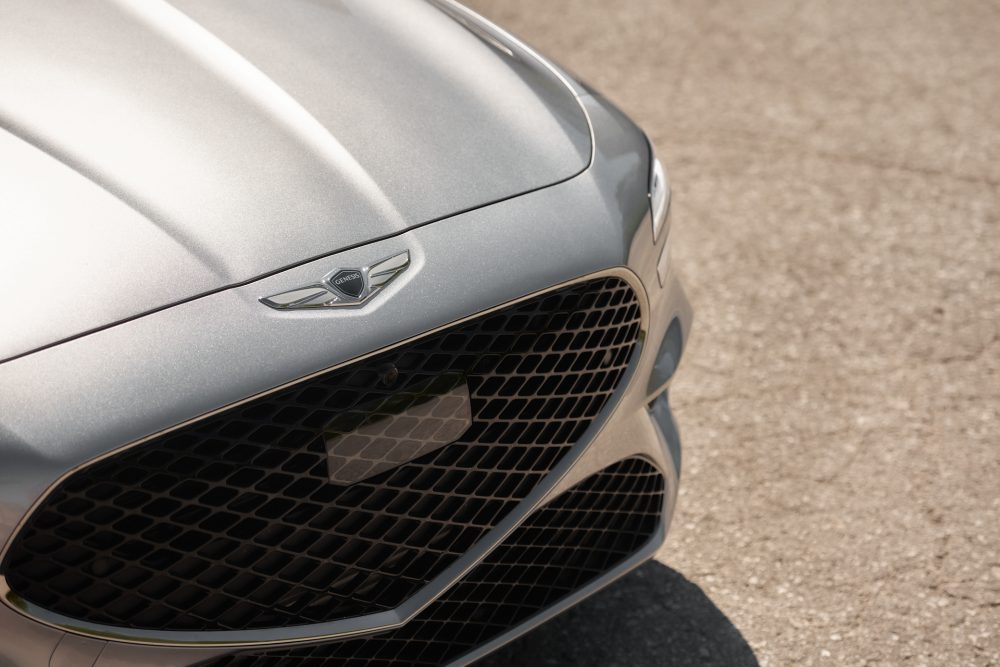 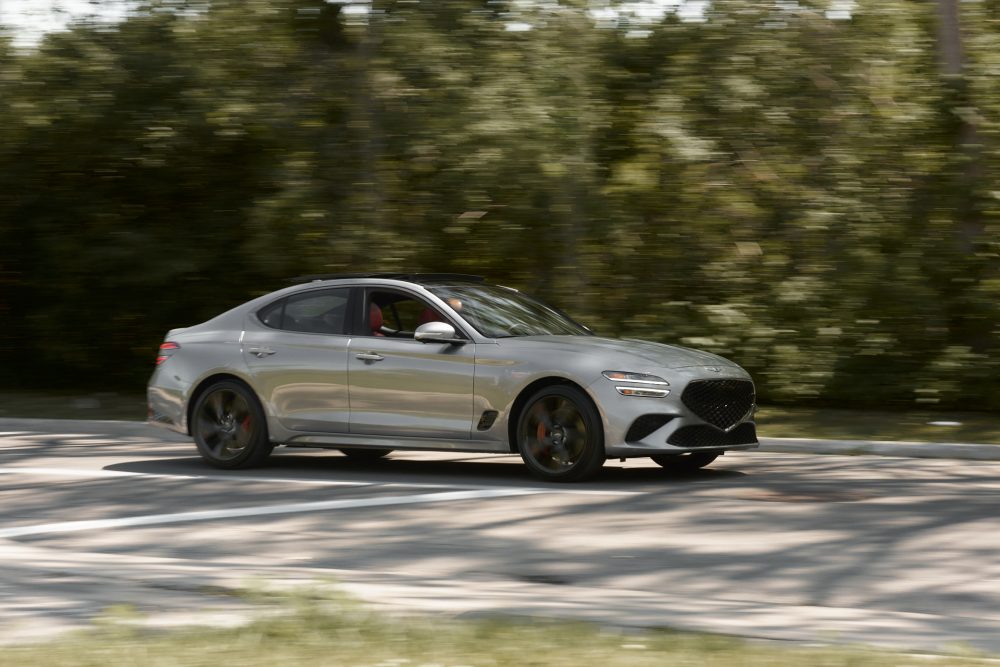 Several carmakers have proclaimed to finally build a BMW M3 killer, only to get demolished in the next comparison test. If the Germans own this segment, it’s because they’ve been working at it for over three decades now, perfecting their art. It also helps to have things like the Nürburgring and the Autobahn nearby. 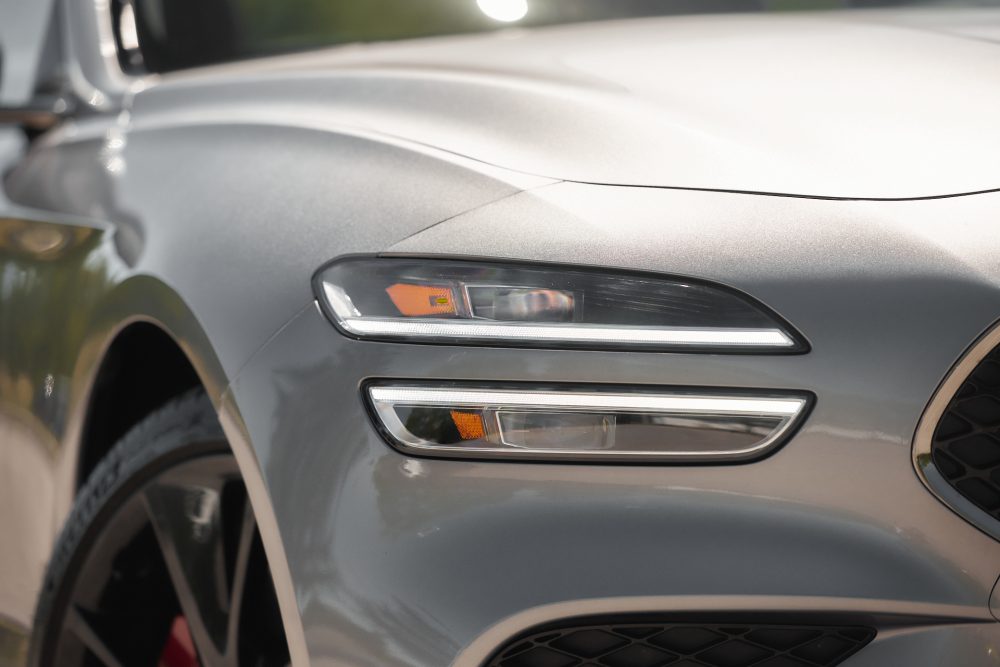 This is why the Japanese brands still haven’t managed to dislodge the Europeans in the sport sedan wars. Things like the Acura TLX or the Lexus IS are fine machines, but their levels of performance and drivability are nowhere near an Audi A4, BMW 3-Series, Mercedes-Benz C-Class or even an Alfa Romeo Giulia. Cadillac has come close with the CT5. But it took it a while to get there. 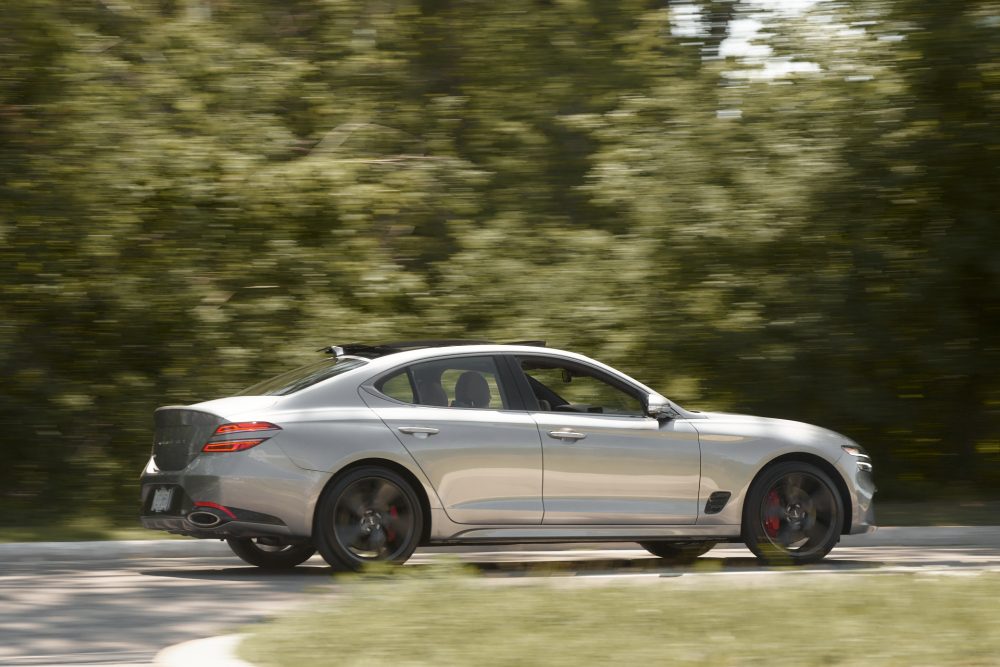 Yet, this Hyundai somehow did it. And in a very short amount of time too. That’s because Genesis understood that the only way to be taken seriously by the German-addicted crowd of consumers, it needs to offer them something that’ll meet their expectations. And to get there, it figured it wasn’t enough to just copy what the Germans are building. It needs to hire people that have worked on German cars for a very long time. People like Albert Biermann, who spent many years calibrating the suspension, chassis, steering and brakes of BMW M cars. That guy works for Hyundai now. 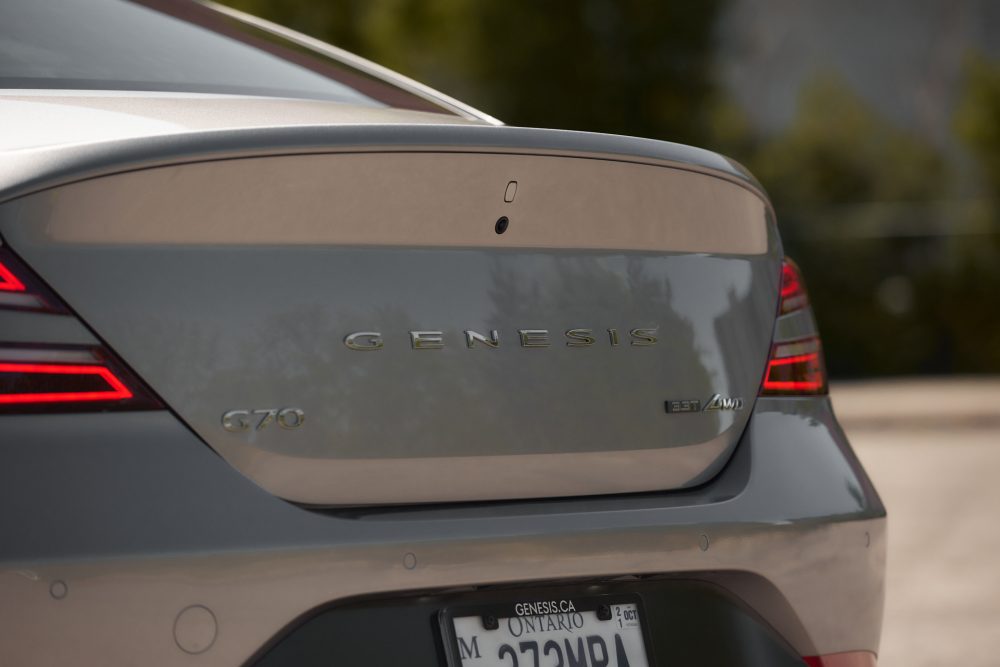 In other words, the 2022 Genesis G70 may not be as fast as a BMW M3 or Mercedes-AMG, but the way it attacks a corner, the expert levels of balance and grace it exhibits as it carries speed through apexes, and the way its steering inputs were tuned, the brakes, the dampers, the fun, is up there among the best. And the new suspension tuning, along with that rear differential and active exhaust amplifies all of that. 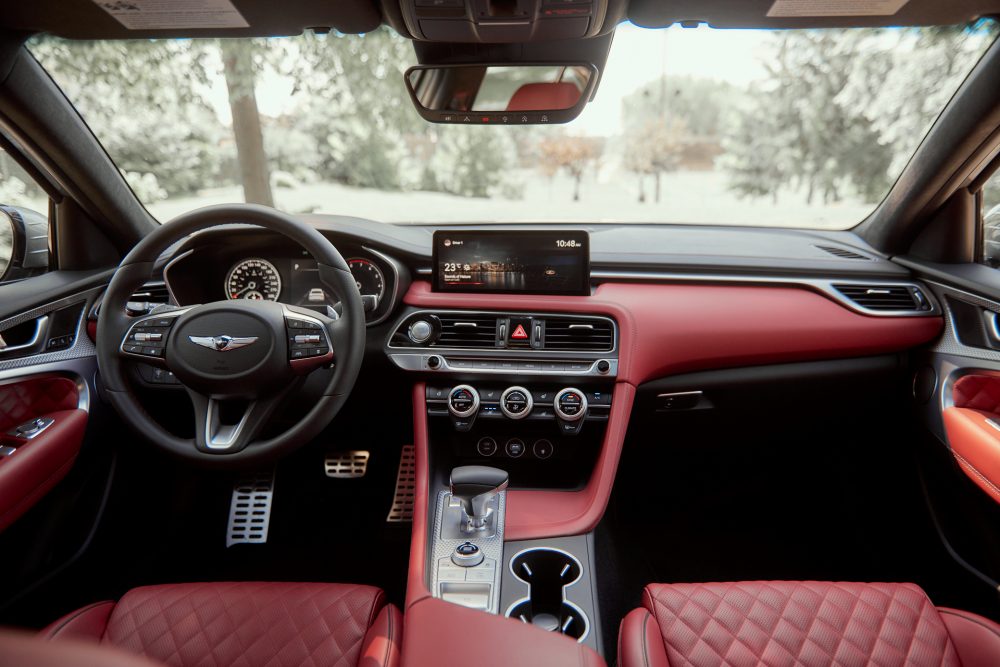 Mind you, the G70 is not a slow car. When you activate launch control, this V6-powered sport sedan will launch out of the hole and up to 100 km/h in about 4.5 seconds. That’s fast by any measure, although still slower than the high three-second times the German trio will sell you. The G70 makes up for that by being a tightly wrapped package, a fantastic value and a downright well engineered thing. Being less expensive than a European alternative also makes the experience that much more pleasant. 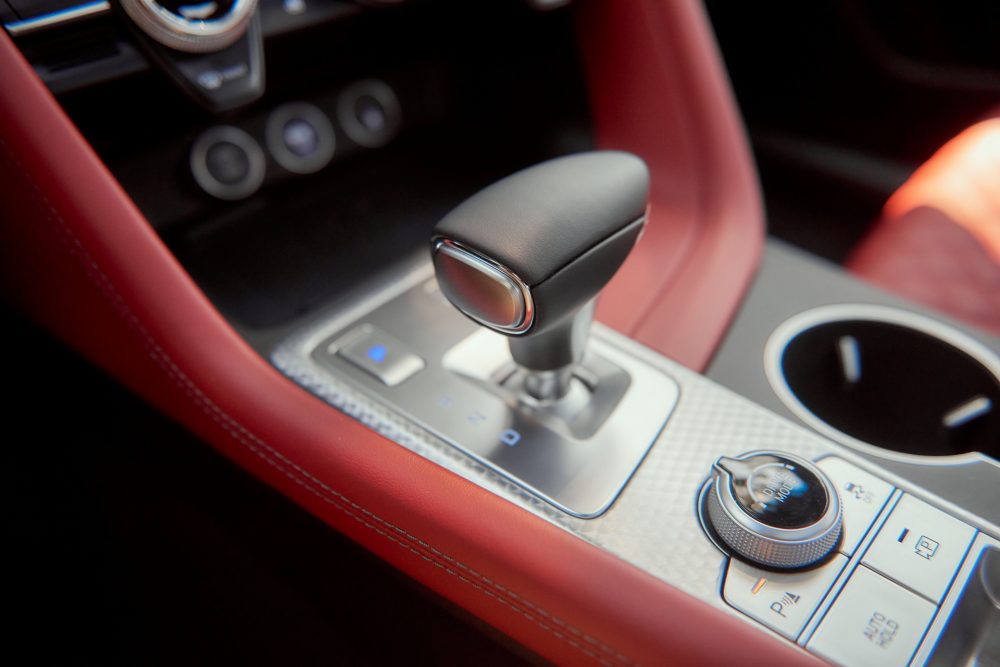 Punch the accelerator pedal at any speed, and the G70 rapidly shifts to the right gear – there are very little delays -, finds the meat of the powerband and propels you forward in solid, confidence-inspiring thrust. This is a potent engine, one that delivers a healthy dose of low-end torque, but will also rev smoothly all the way to its rev limiter. It sounds properly decent too. 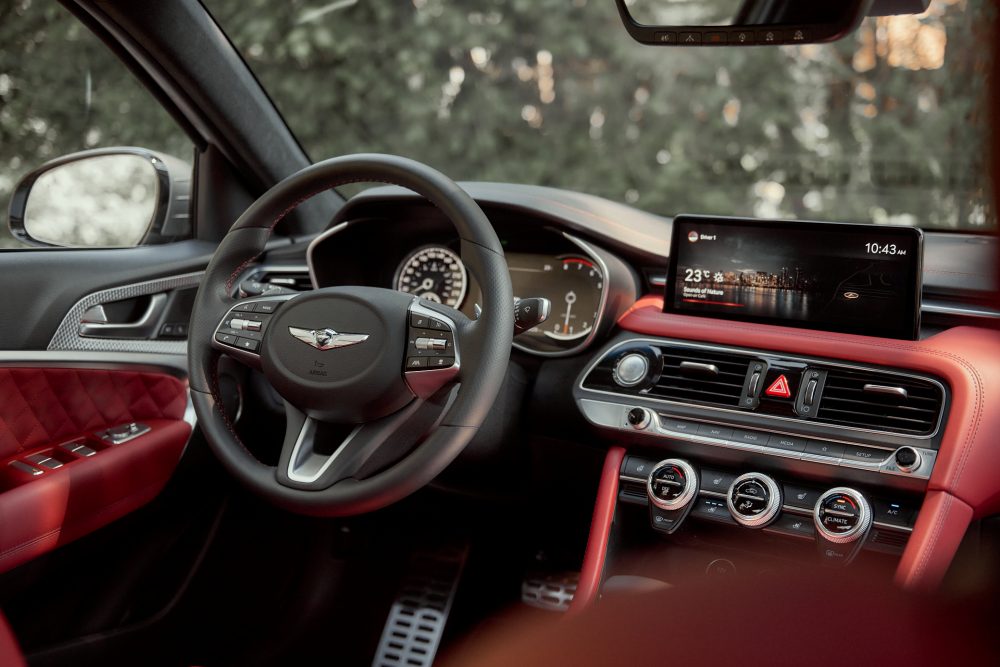 This is just a damn fun car to drive, super well put together too. Material quality is superb, build quality is excellent and while, yes, some will say that the switchgear and gauges remind them of certain Kia products, the truth of the matter is that everything is well presented, easy to operate and extremely well thought out. 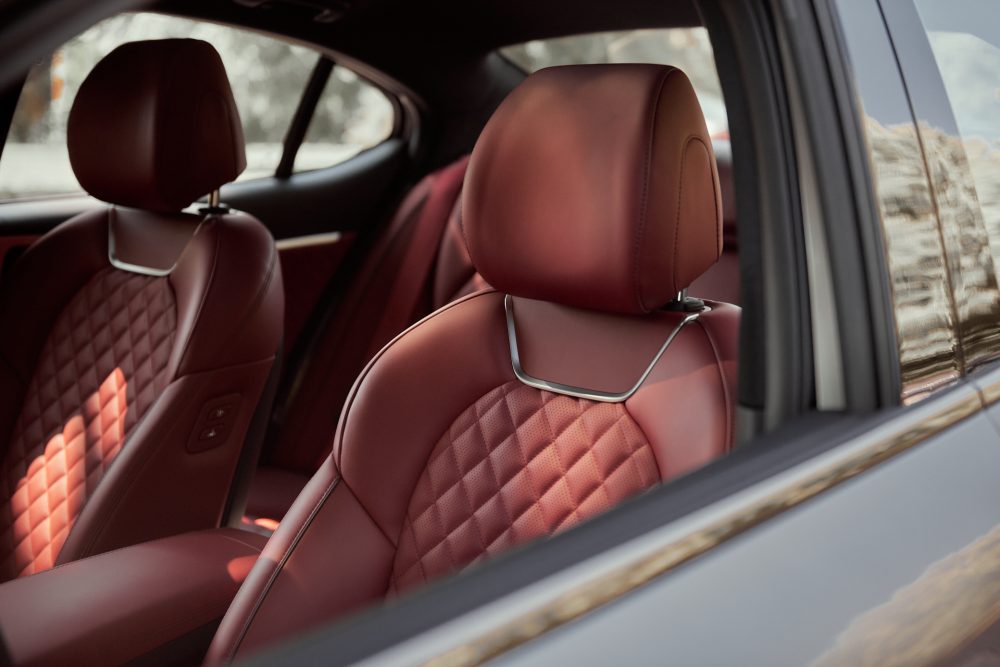 Pitfalls? There are some, like the furiously tight rear seat that doesn’t give you any form of leg room if an adult is sitting in the front. The infotainment system works fine, but I much preferred the simpler, more rudimentary setup of the old car. I also don’t understand why a car of this segment still doesn’t have fully digital displays. There’s still no electrified version neither. And then there’s the question of resale value and brand recognition. They’re still non-existent. 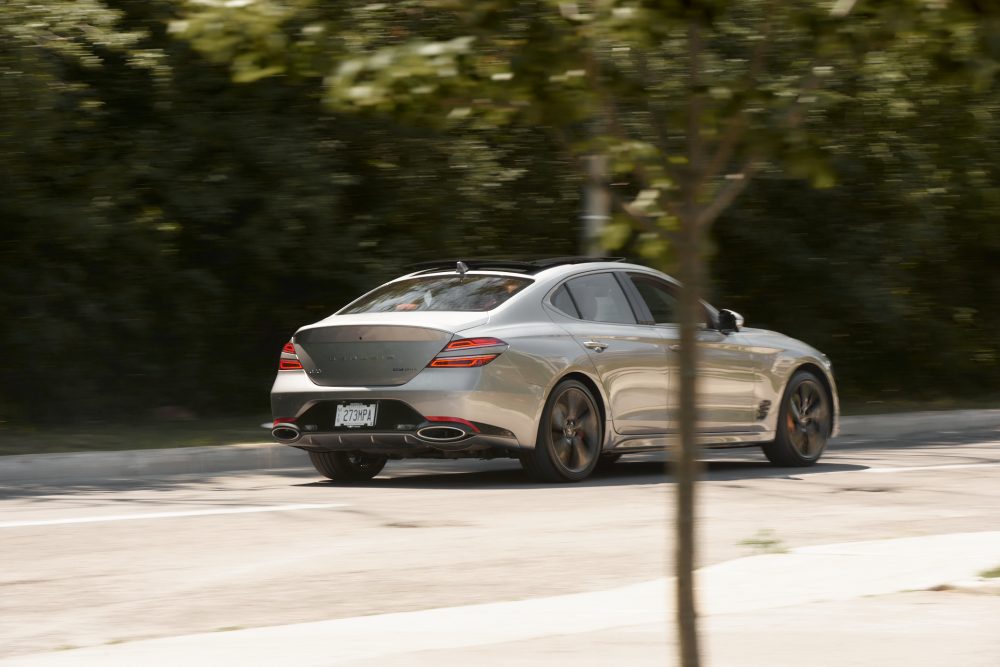 But this carmaker is evolving fast, and with a car as good as the 2022 Genesis G70, it’s proving that it can build something as potent and desirable as a German alternative, all at a more attainable price tag and a considerably more appealing business model. I say lease this thing to give it a try. You might come back for more. I know I’m already looking forward to drive it a second time.