2022 Nissan Pathfinder Updates Itself In A Very Conservative Way 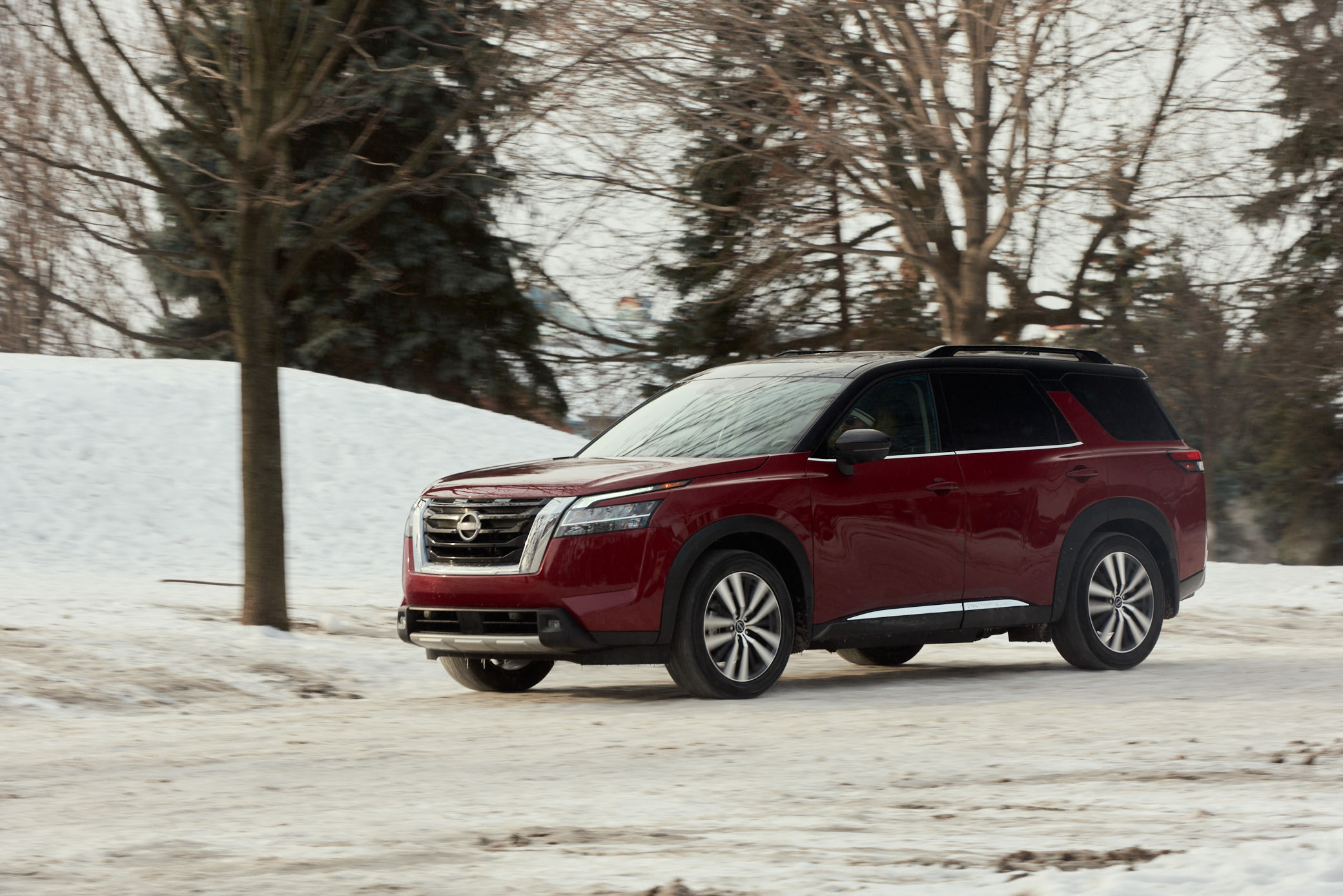 The 2022 Nissan Pathfinder is finally all new. Fine, it’s not exactly all new, but considering how old the last-generation Pathfinder was, it feels good to see some change from this model. The Pathfinder is a stalwart midsize SUV, so a full model overhaul is a big deal both for Nissan and consumers. Here’s the thing though: the new Pathfinder’s approach is immensely conservative considering what it’s now up against.

The Return Of Boxy Styling 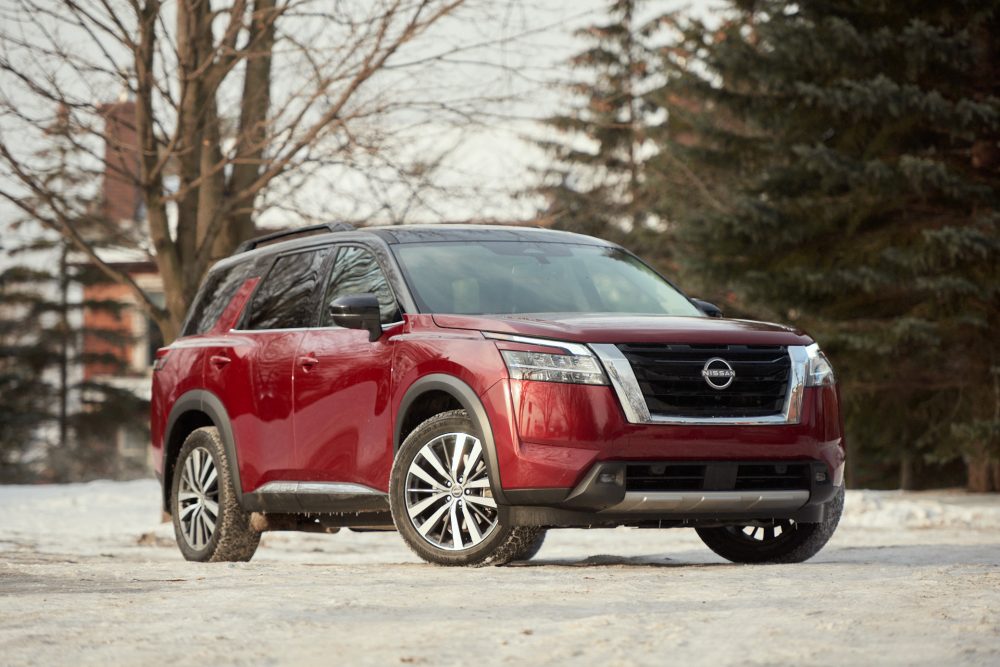 Just over a year ago, I would write on these pages that Nissan’s entire lineup is dated and considerably behind the competition. But it’s no longer the case thanks to a completely overhauled lineup ranging from the excellent Sentra, all the way to an all-new fully electric Ariya coming later this year. Oh yes, and the new Z. I’m definitely looking forward to driving that one. 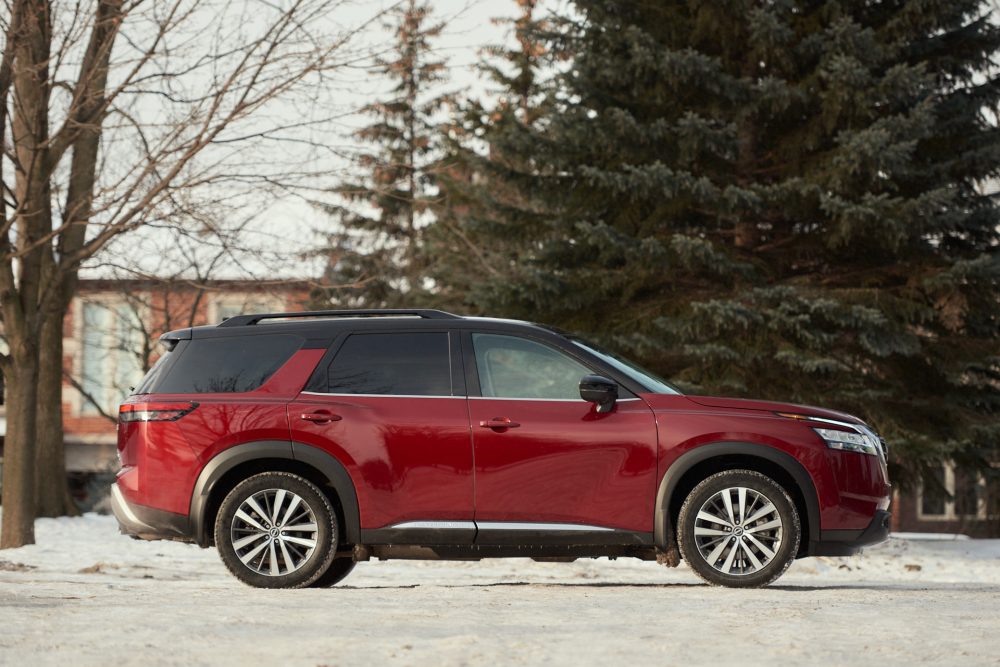 Anyway, when I say the new 2022 Nissan Pathfinder isn’t exactly new, I mean that it still rides on the same platform and it’s powered by the same old V6 engine as before. Don’t get me wrong, that engine is reliable as fuck, but Nissan isn’t necessarily innovating here. There’s no hybrid drivetrain, or fully electric. Very much like the Rogue then, Nissan uses a very conservative approach by modernizing the Pathfinder’s styling, interior, technology and convenience while leaving its solid bones intact. It also looks boxy again and that’s cool as hell. 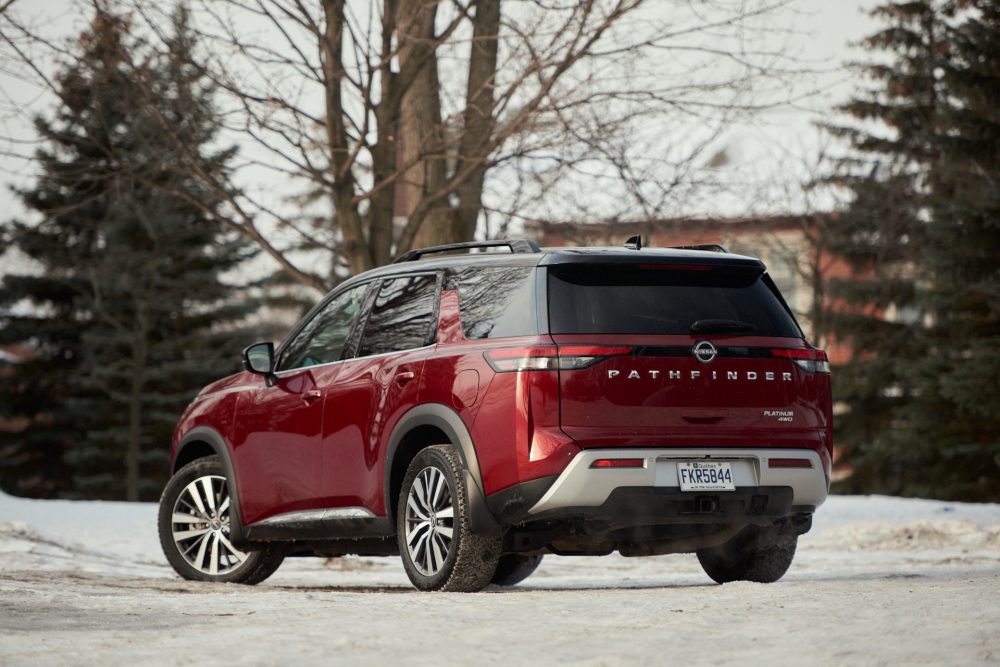 Perhaps the greatest news is the complete deletion of that god-forsaken continuously variable transmission (CVT). Nissan has finally admitted (not actually admitted) that it was a royal piece of shit, both from a reliability and drivability standpoint. It’s been replaced by an arguably better and more reliable ZF-sourced nine-speed automatic gearbox. 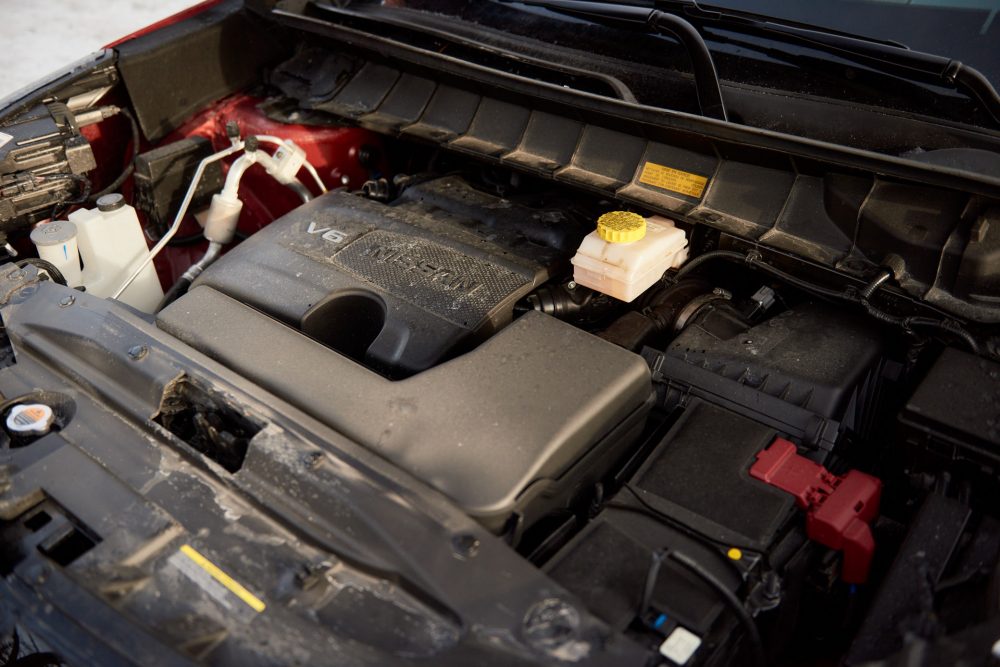 Power from the 3.5-liter V6 is unchanged at 284 horsepower and 259 lb-ft of torque. All-wheel drive is of course standard here in Canada, but Nissan now includes a wider variety of drive modes which adapt according to the surface on which you’re driving. The 2022 Nissan Pathfinder’s towing rating is still set at a healthy 6,000 pounds. 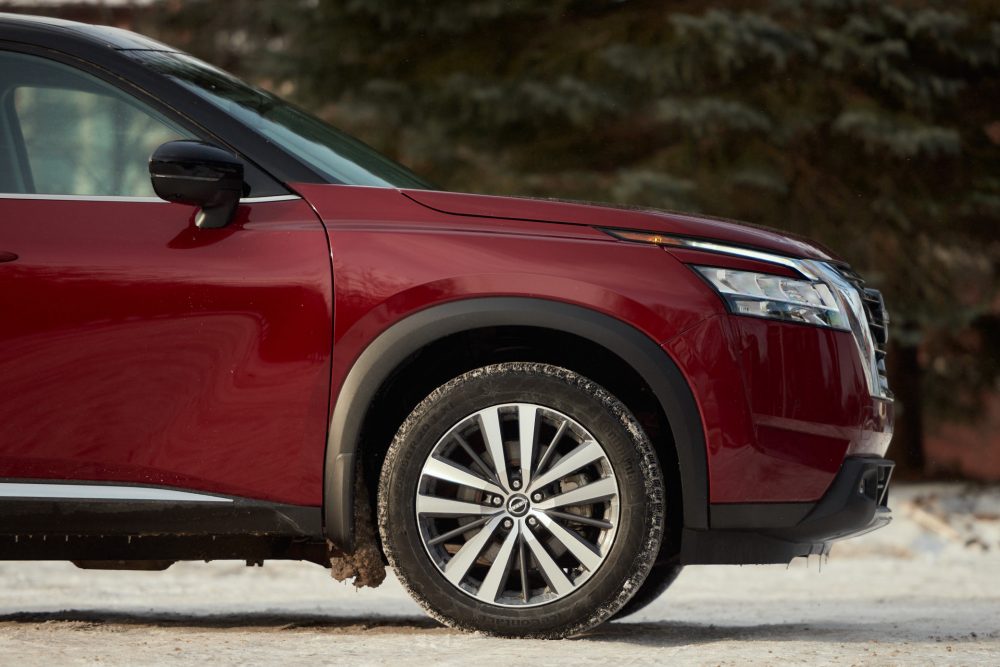 Pricing for this big boy sits right smack in the meat of the segment, with a starting price $46,313 for a base Pathfinder S. There are five trim levels to choose from, with the top-dog Platinum model (as tested) selling for $56,973. 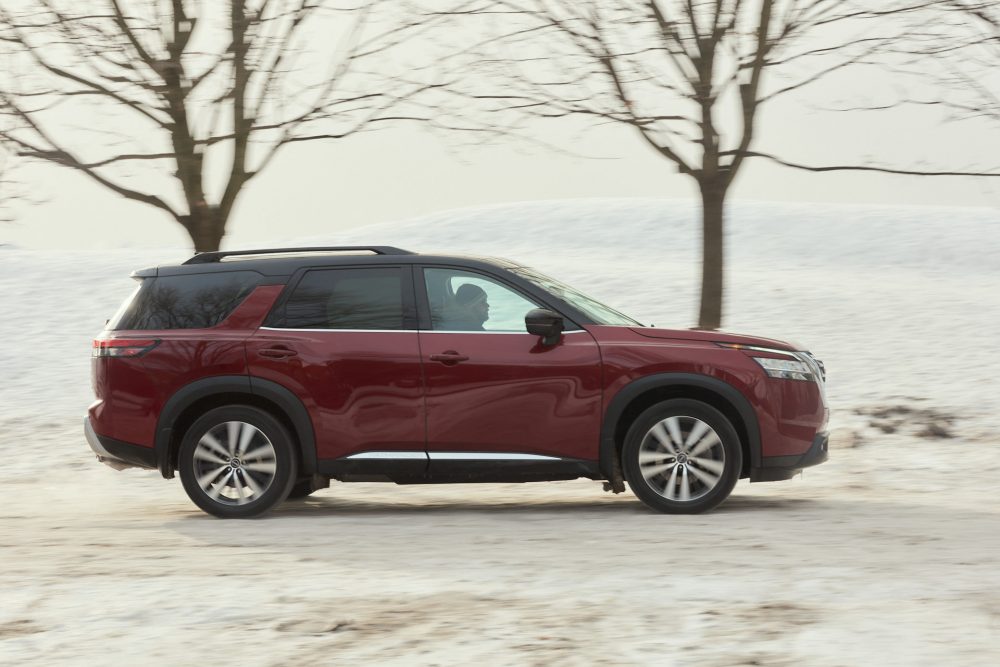 The new Pathfinder may ride on the same old platform, but you’d never know that from the way it drives. Considerably stiffer and more compliant than its predecessor, this architecture feels super solid, refined and upscale. The adjective that best describes this midsize SUV’s driving experience is smooth. 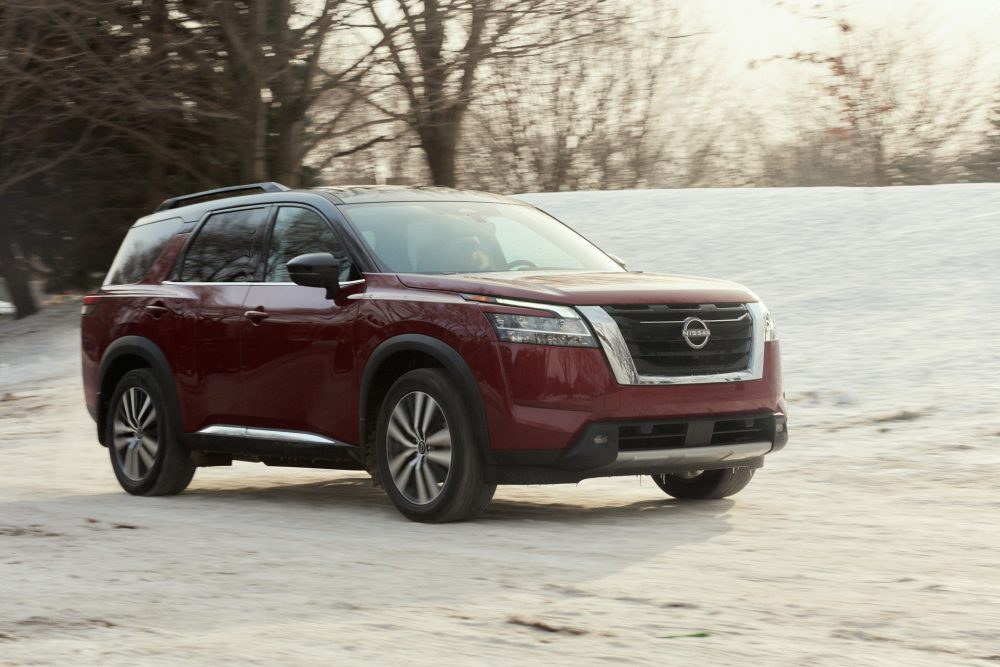 The square design also gives it a somewhat clunky vibe. This in turn gives the 2022 Nissan Pathfinder the desired rugged feeling we all expect from this nameplate, but it sadly plays against it by feeling a tad too large. That’s all an illusion though, because from a dimensional standpoint, the new Pathfinder is actually an inch and half shorter than the old one. 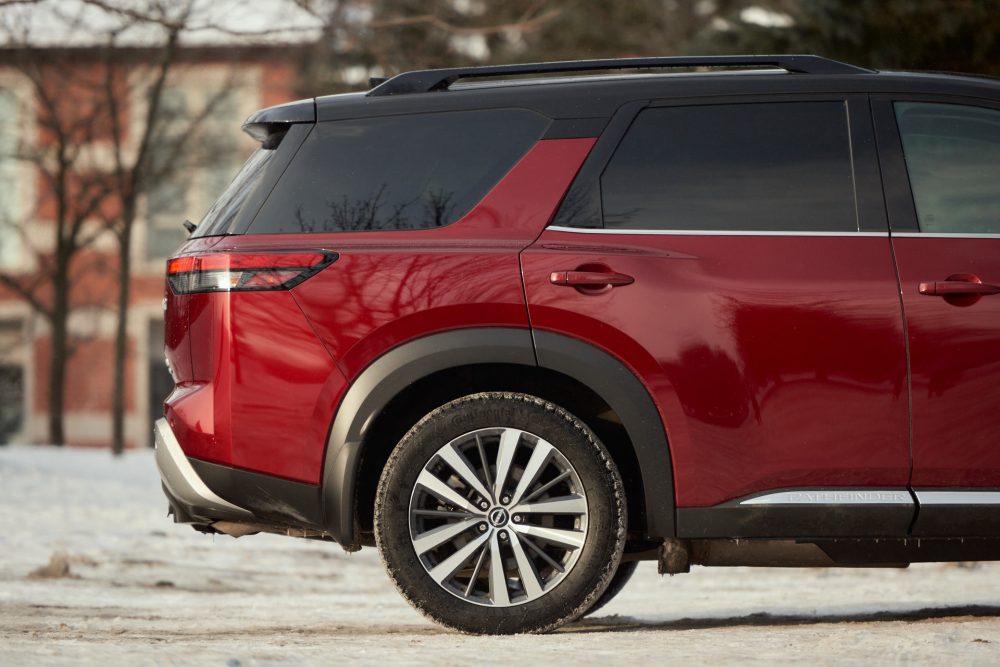 That V6 engine continues to be a highly effective unit. Sure, in a world where turbocharging rules the Earth, the lack of instant low-end torque is a bit of a letdown. One needs to really let that engine sing to extract everything it has in stock. What I do like, however, is instant throttle response and no lag from this drivetrain. It’s just an honest to goodness good workhorse, one we all know will last forever and cost very little to keep alive. 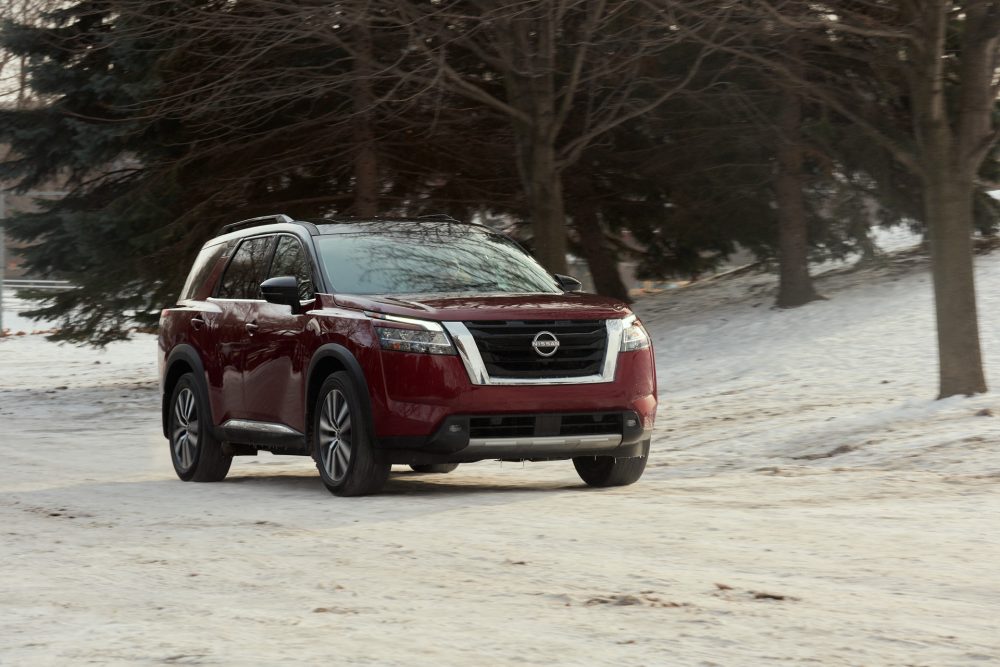 The nine-speed operates well in the sense that it properly exploits the engine’s powerband and operates smoothly when it wants to. What I mean by that is how rough it can get when it’s cold. Shifts can at times feel and sound clunky, with even a complete refusal of getting the car to move forward when applying throttle. I had similar issues in the Honda Passport which utilizes the same gearbox. Once the transmission oil warms up, however, its operation is near flawless. 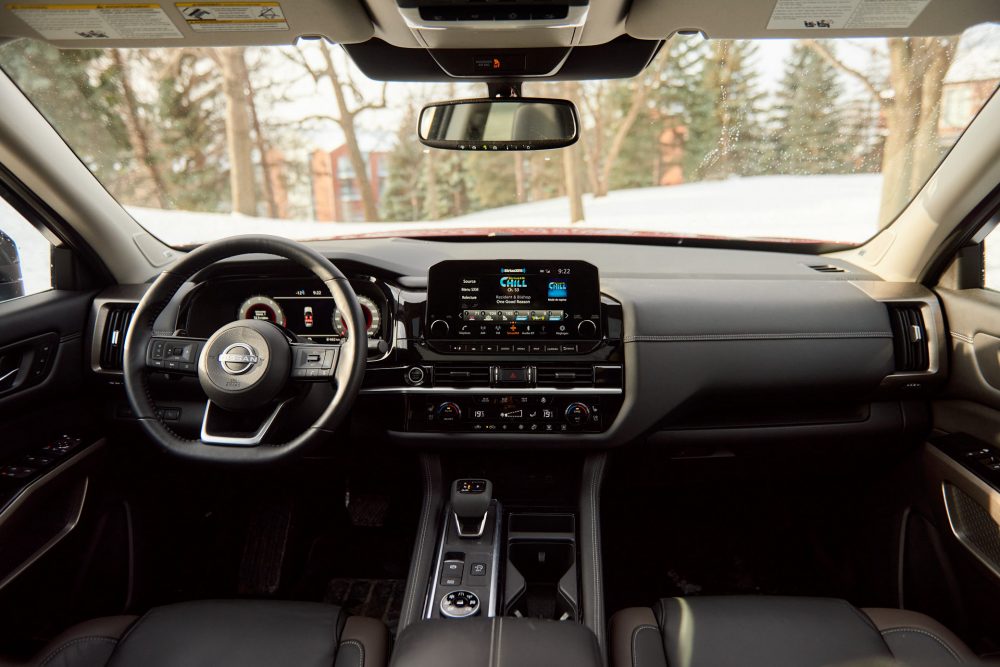 The cabin really is where the Pathfinder shows a significant upgrade over its predecessor. The entire dashboard design is new, with a fully digital gauge pod that can change its readouts at the push of button. There are more modern features, like wireless phone charging, a WiFi hotspot and wireless Android Auto and Apple CarPlay. 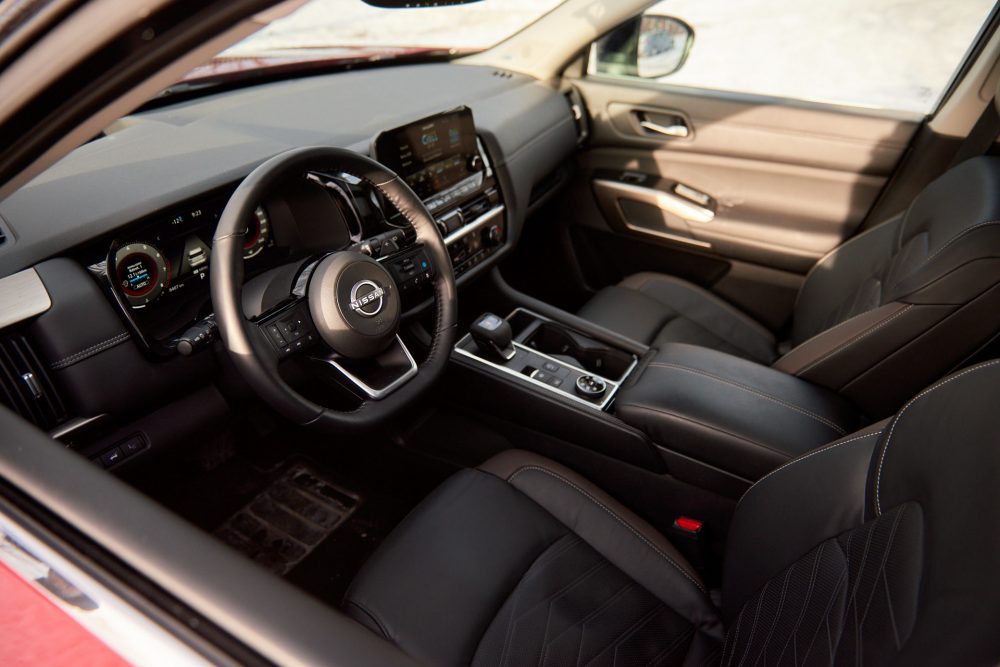 Overall ergonomics in a Pathfinder are frankly class-leading, with a comfortable seating position and a commanding view on the road. You sense that Nissan ticked off the checklist of what a modern family needs in a crossover and didn’t even dare to add more toys. 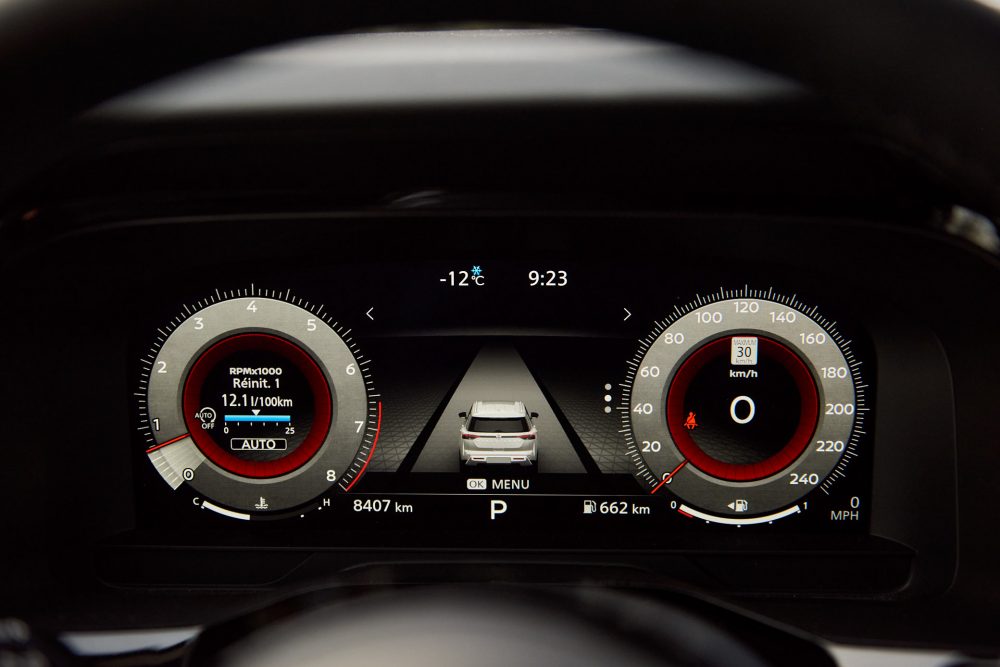 Some will appreciate this straight-forward attitude, but others might find the overall execution of the Pathfinder to come through as a little stale. At the end of the day, what counts for Nissan is that this vehicle sells. And from the way it was put together, it’s obvious that Nissan has a future sales hit in its showroom. 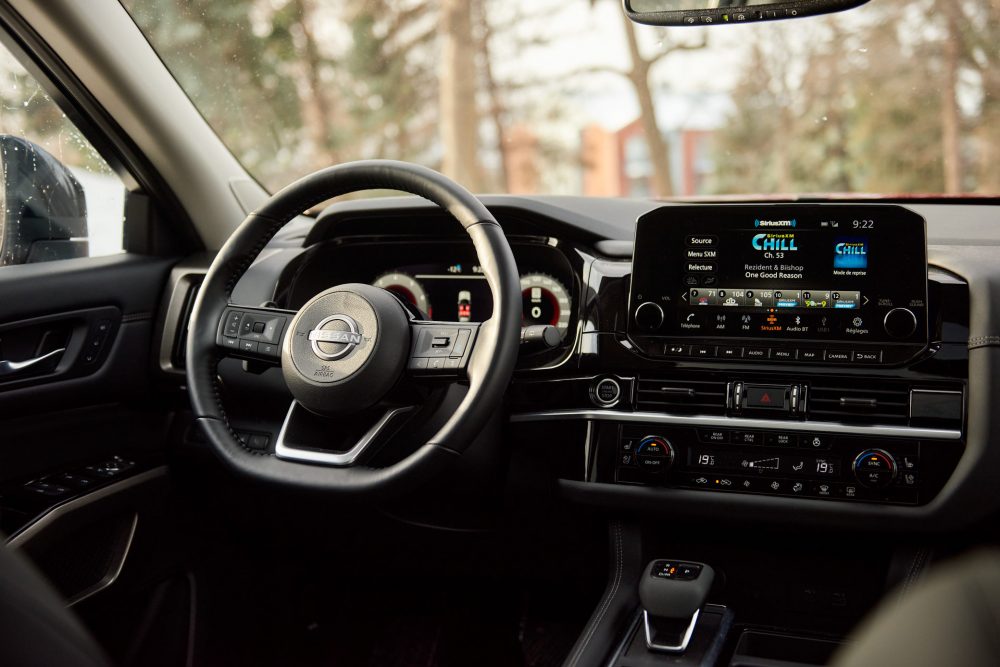 For instance, Nissan tweaked the entire two and three-row seating area to ease ingress and egress. The second row now folds forward with much more ease. At the touch of a button, it all tumbles forward, giving way to a considerably larger third-row opening than before. Once you’re back there, tall passengers could feel a little tight, but overall leg and head room is above average, without necessarily topping the segment. I personally found the Kia Telluride to be more spacious than this Pathfinder, but a Mazda CX-9 definitely trails behind. 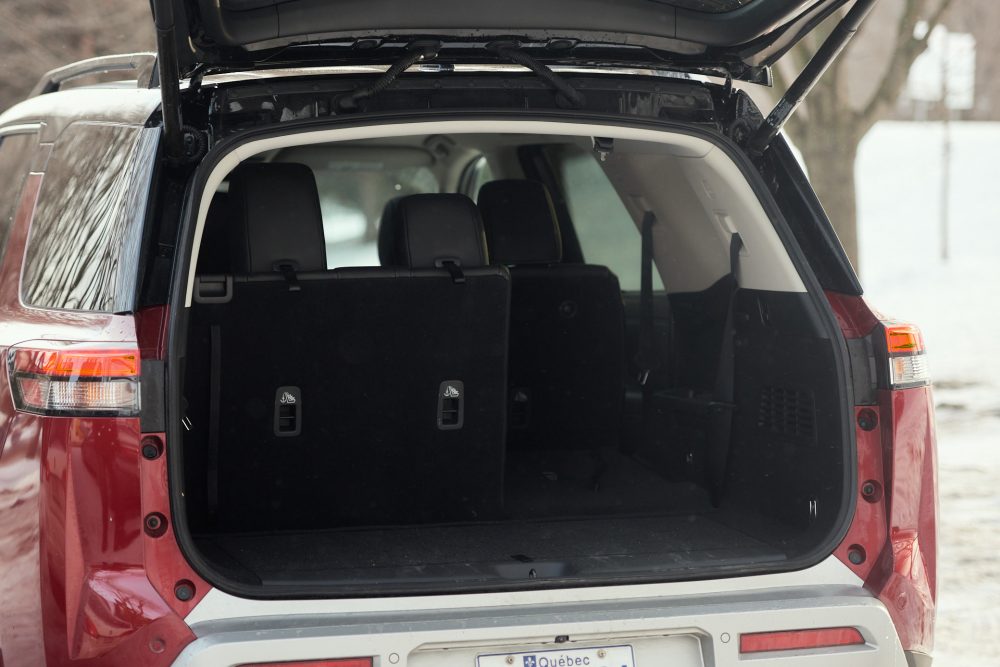 Total cargo space in a Pathfinder was also slightly improved, and that’s impressive considering that the vehicle is no larger than before. When all seats are folded flat, this SUV stands at 2,280 liters compared to 2,251 liters in the old model. This places the Pathfinder among the most spacious in the category, but still behind a Kia Telluride and a Dodge Durango (2,406 liters). 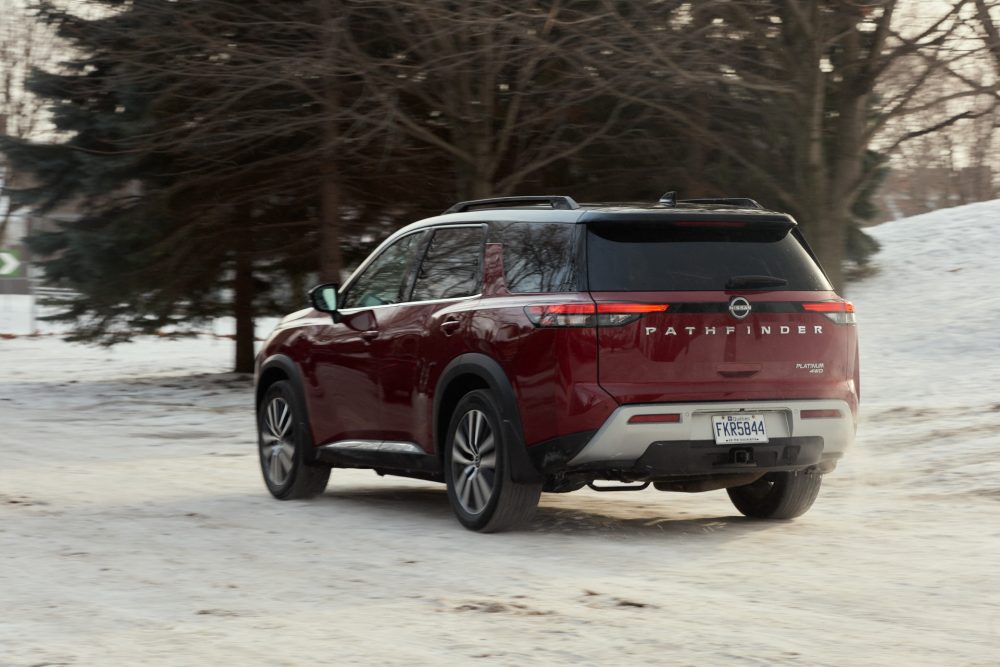 Look, it’s obvious that the 2022 Nissan Pathfinder is a solid three-row midsize SUV. Its engine is bulletproof, its transmission is now good and the overall package is well presented. It also improves on crucial elements like cargo space and overall ergonomics. Are there more sophisticated alternatives out there? Definitely. And do some of these rivals dare to think outside the box? Absolutely. But, hey, “it gets the job done” is a damn good quality as well. Nissan understands this, which is why it didn’t even bother going the extra mile.