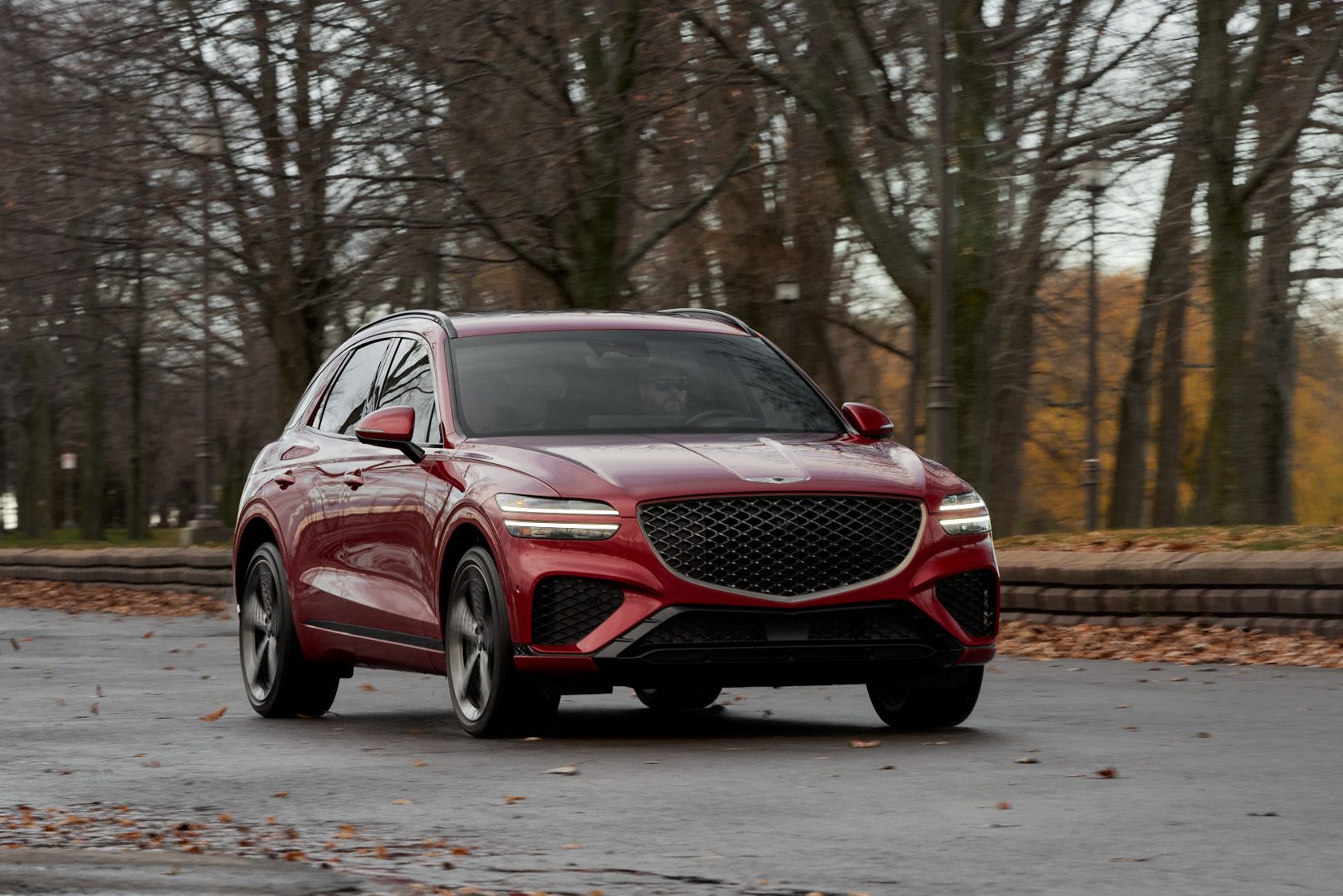 The 2022 Genesis GV70 may be the brand’s first ever luxury compact SUV, but it’s already disturbing the force. Like all other Genesis products I recently reviewed, especially the G70 sport sedan, the GV70 is the answer to a question nobody asked. Did we need another luxury compact SUV? Of course we didn’t. Do premium car buyers have Hyundai’s luxury division in their crosshairs? No they don’t. Wait, turns out they do. And I’m beginning to understand why.

Stick To What Works 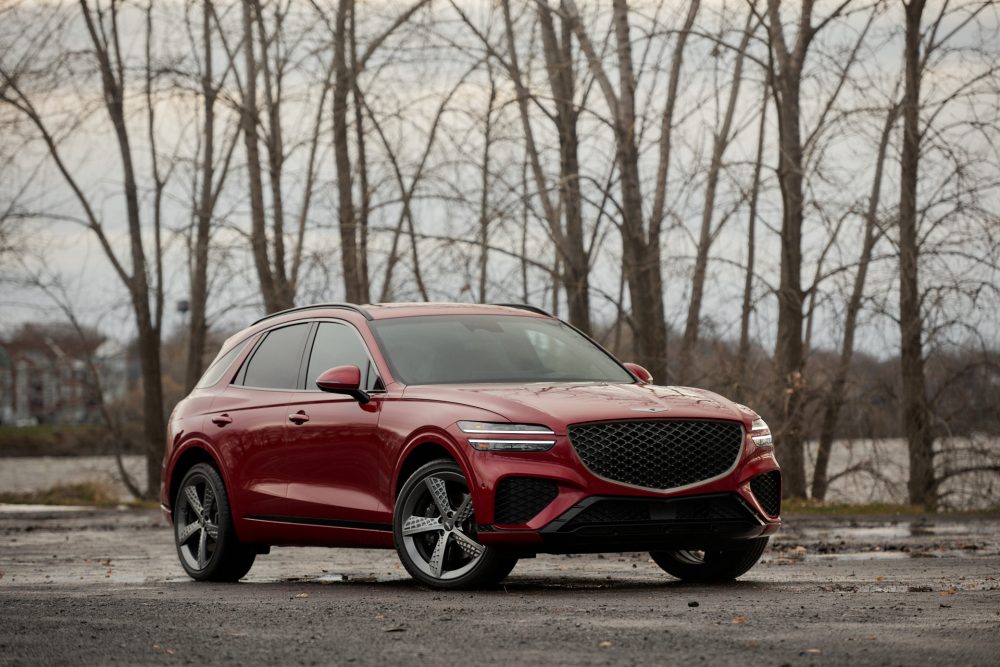 If the BMW 3 Series is the benchmark in the compact luxury sedan world, than the BMW X3 is the one to beat in this segment. Genesis understands this, which is why it adopted the same strategy as with the G70 when developing the GV70 SUV. 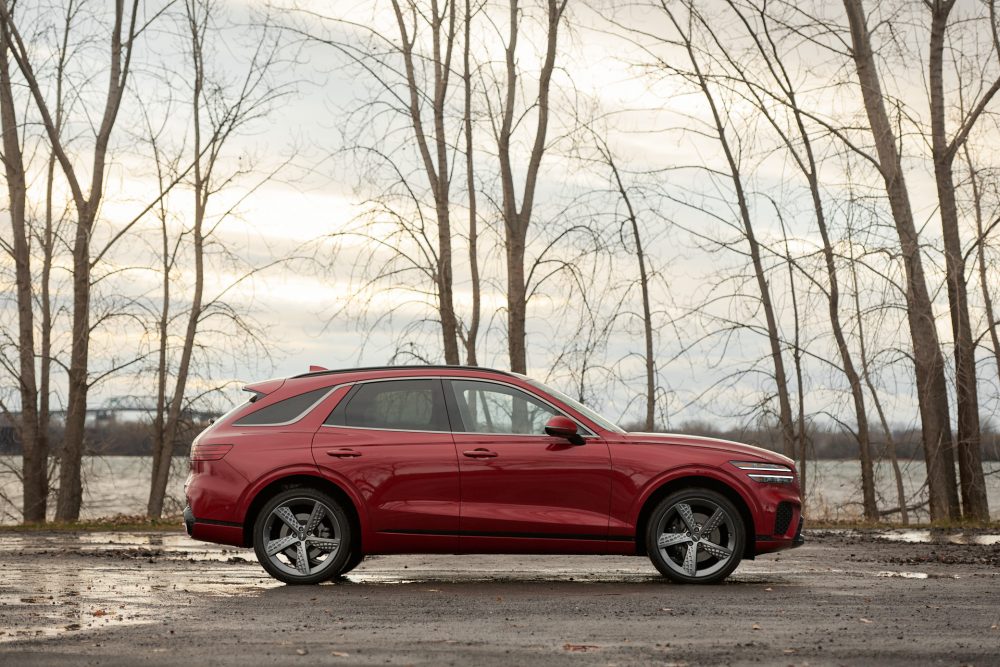 Mind you, it wasn’t exactly hard to do considering this is essentially a G70 on stilts, hence the name. Genesis essentially does what all great luxury brands have been doing forever by sourcing a platform from its compact sport sedan. It’s a feat the Japanese carmakers, notably Acura with the RDX and Infiniti with the QX50/55, still can’t seem to understand. 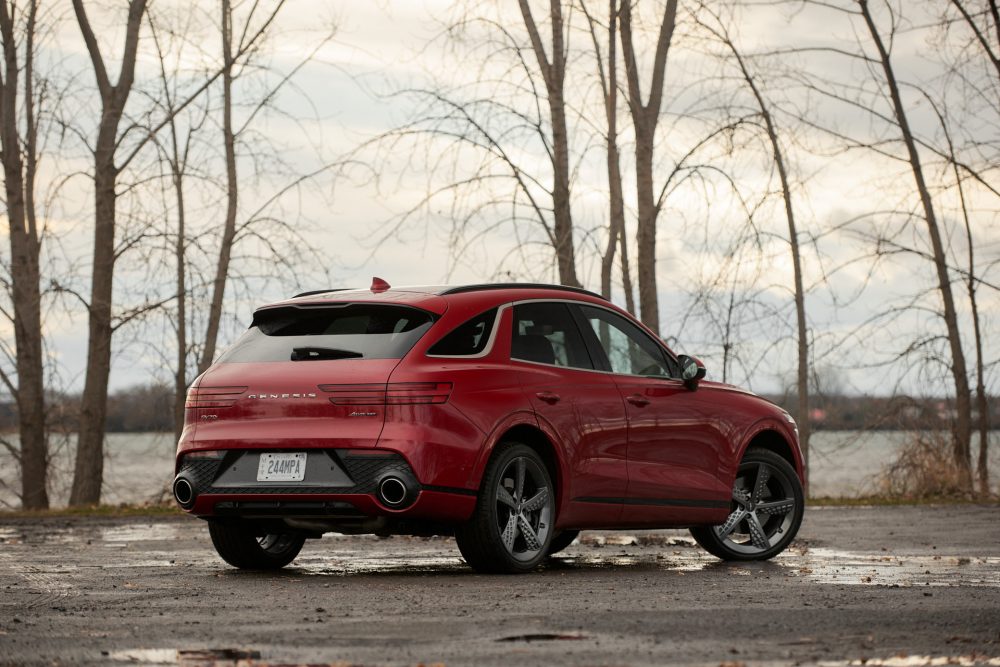 It’s by benchmarking the best in the segment that Genesis was able to give birth to something as serious and as accomplished as the GV70. For instance, it sits on a rear-biased architecture with an engine installed longitudinally, like an X3, but also a Mercedes-Benz GLC and an Alfa Romeo Stelvio. This allows the GV70 to instantly leap frog its Japanese and American competition from a driving standpoint. 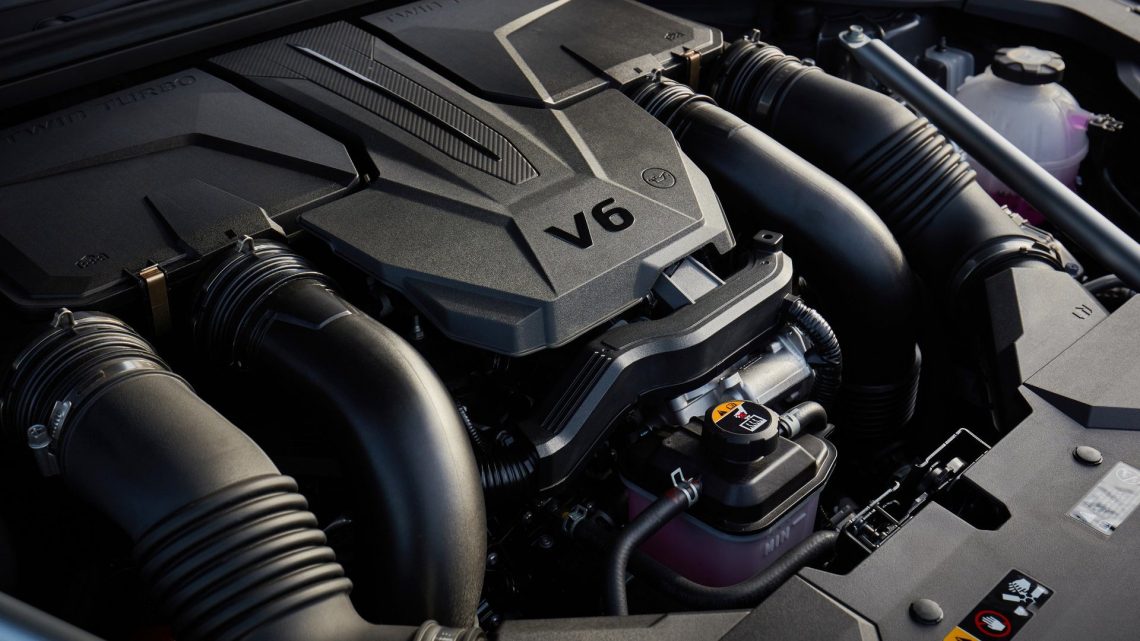 Just like its big brother, the GV80, the 2022 Genesis GV70 can be had with a choice of two engines. Baby models make do with the same turbocharged 2.5-liter four-cylinder that’s good for an identical 300 horsepower and 311 lb-ft of torque. My model was a top of the line GV70 Sport Plus powered by the twin-turbocharged 3.5-liter V6. It’s good for 375 horsepower and 391 lb-ft of torque. That engine is paired to an eight-speed automatic gearbox, and all GV70s sold in Canada come standard with all-wheel drive. Towing is rated at 3,500 pounds, which is a tad low for the segment. 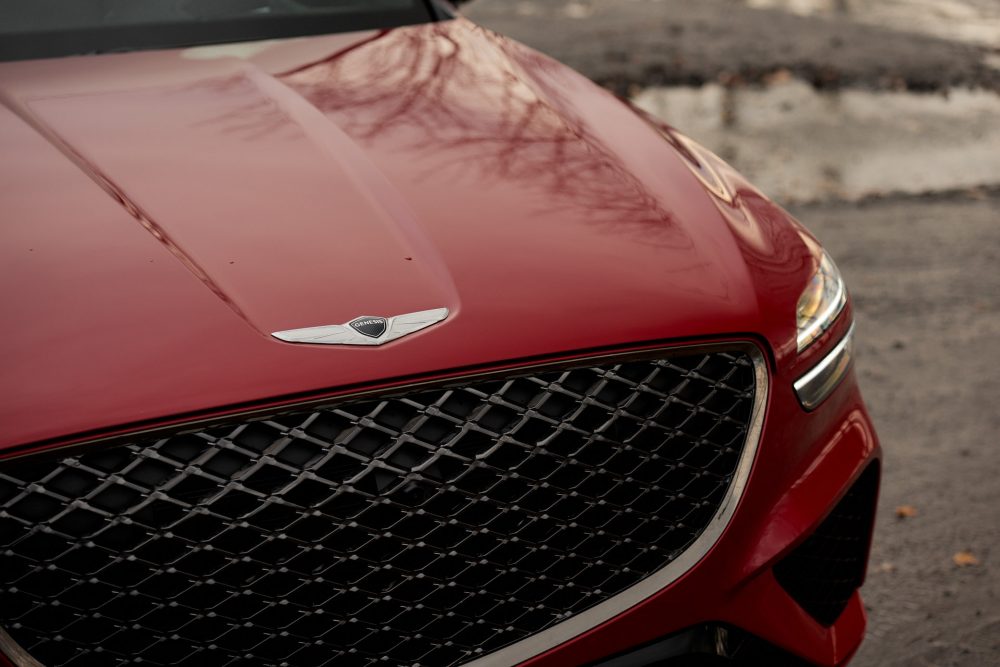 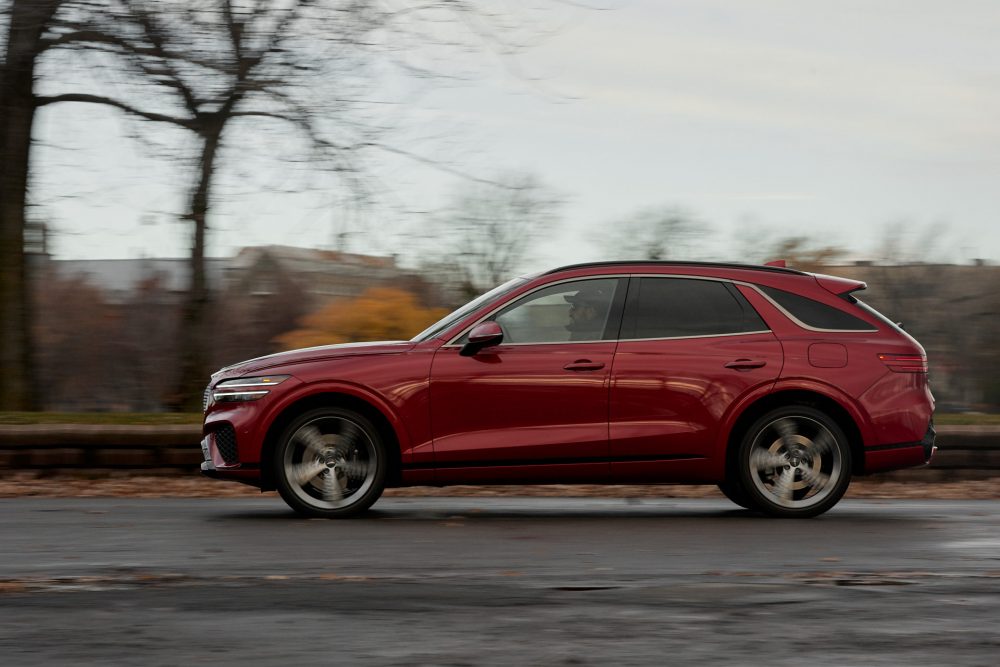 I’ll put this on the table right away: no, the 2022 Genesis GV70 isn’t as athletic as a German alternative, nor is it as composed as a Jaguar F-Pace. But as a first attempt, this is good enough to have them reconsider their strategy. Acura, Lexus, Infiniti, Lincoln and Cadillac: take notes, because this vehicle could soon give you a very hard time. 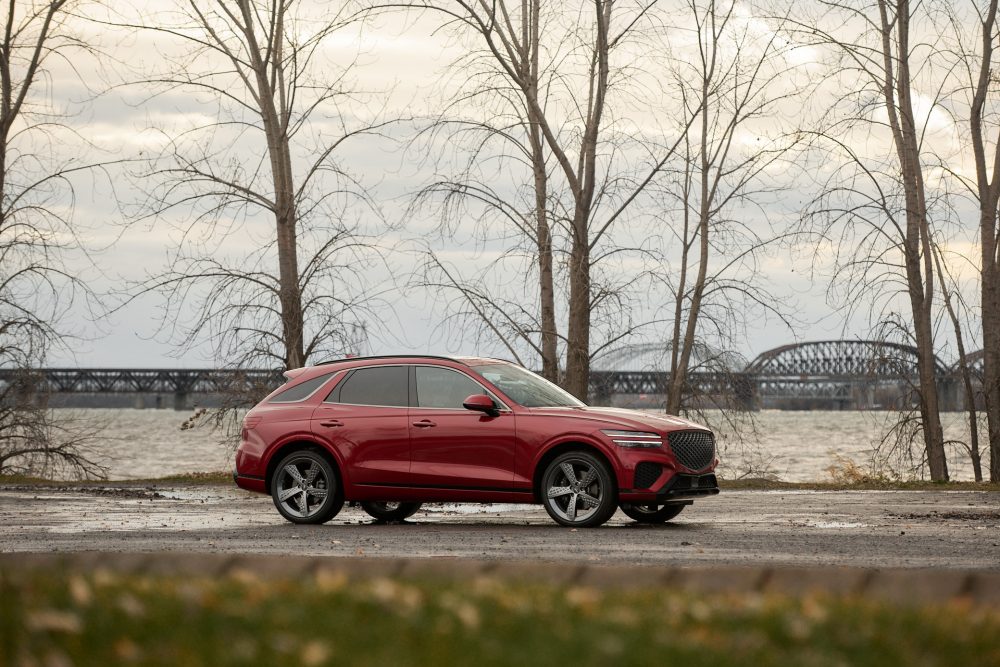 Enter a corner fast with the GV70, and it feels considerably heavier than anything European in this segment. Yet, it’s only about 60 pounds heavier than an X3 M40i. That’s because it doesn’t transfer its weight as well as the BMW. For starters, its a V6 engine, which simply can’t reproduce the impeccable weight distribution of a straight six unit. 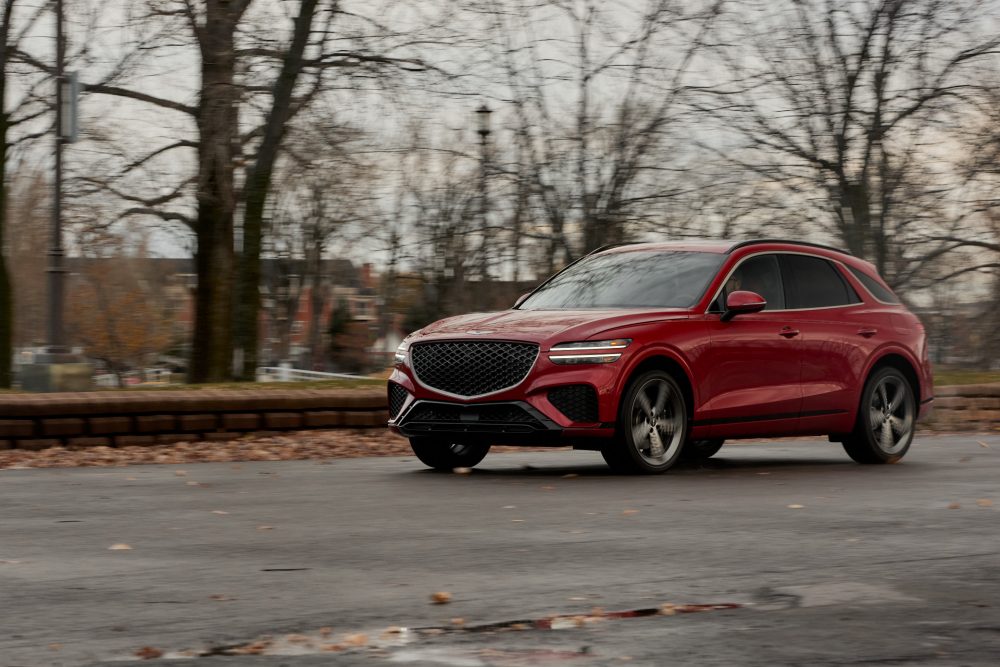 And although my tester had adaptive dampers, there’s always much softer feel than the Germans’ typically stiff ride. It also didn’t help that my GV70 was fitted with god-awful Michelin Primacy Tour A/S all season tires. They’re shit. 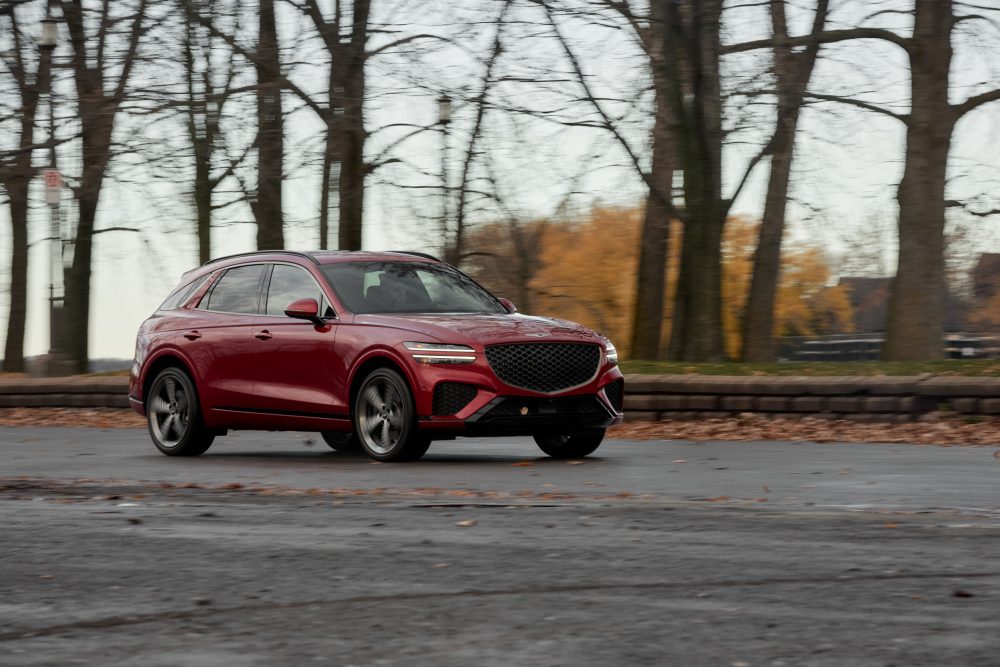 Where the GV70 impresses is in its power delivery. While that V6 is nowhere near as smooth or sophisticated as something European, or even Japanese for that matter, it dumps its power and torque with utmost authority. Slam the throttle and the transmission quickly shuffles down a few gears as a wave of power immediately engorges the cabin. Power activates at any RPM, and there’s a lot of it. A 0-100 km/h time of 5.0 seconds flat may not be enough to outrun an M40i, but it’s still quick enough to allow the GV70 Sport to be taken seriously in this space. 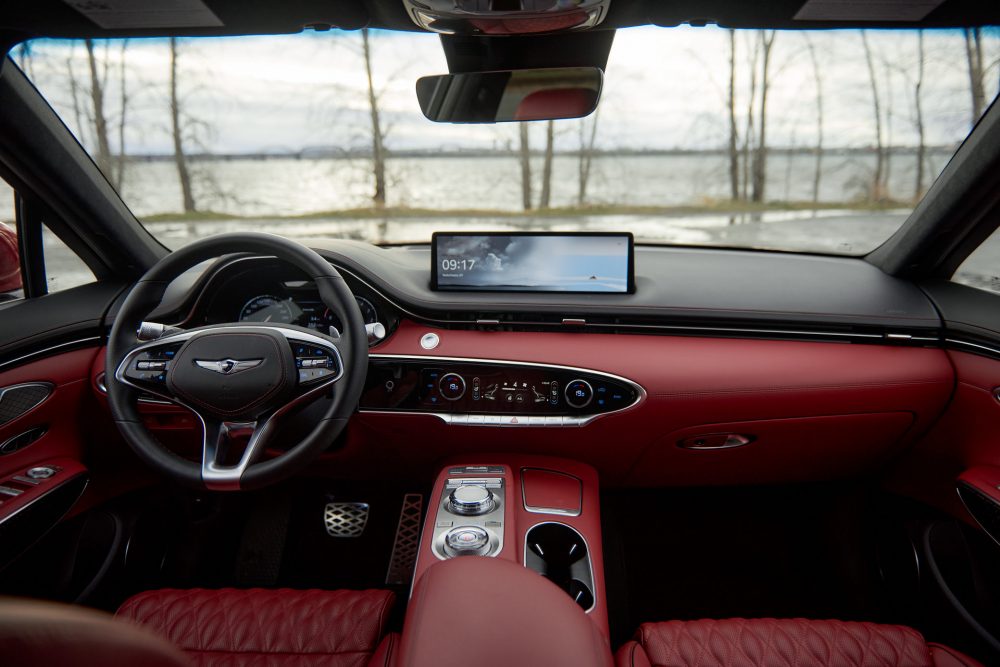 What the GV70 loses in outright performance, it makes up for it by its unique display of luxury. The cabin is just as eccentrically designed as the exterior, with neat color combinations and near obsessive attention to detail at key areas like the quilted leather seats or the beautifully integrated digital HVAC unit. 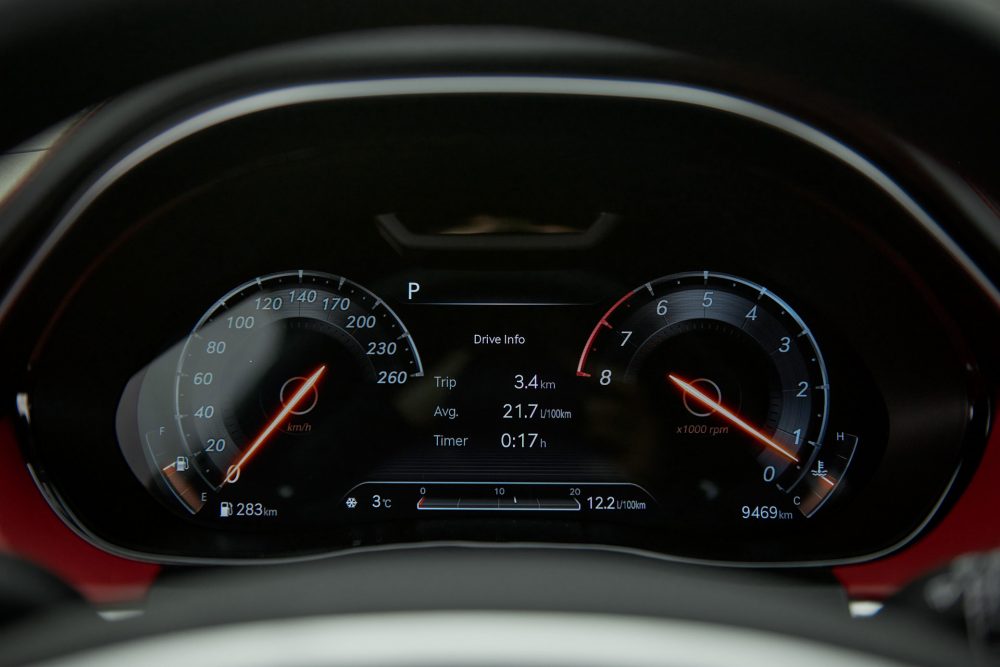 The GV70 also innovates with cool technology, some being more useful than others. For instance, the gauge cluster on this Sport Plus model uses augmented reality to appear like it’s 3D (more convincing in real life). It definitely looks cool when the driver’s looking straight at it, but the passenger may feel like their experiencing an acid trip. My question to such a gimmick is: why even bother? 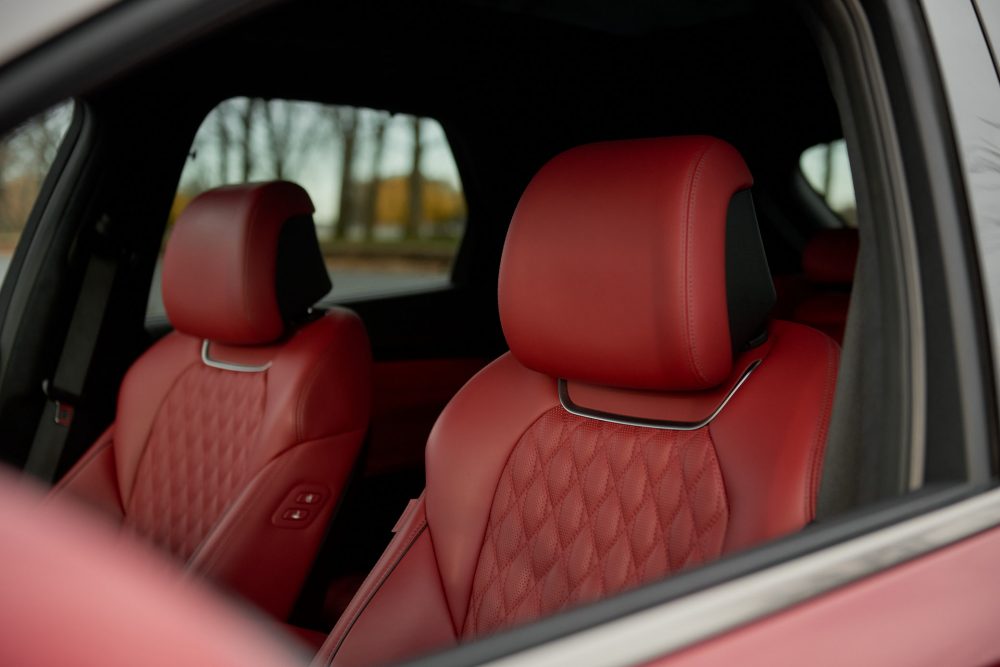 Luckily, some of this SUVs tech has purpose, like the fingerprint reader which allows you to turn on the vehicle without having the key fob on you. That reader can associate a wide variety pre-configured settings to your fingerprint, things like your ideal seating position, climate control settings and infotainment setup. 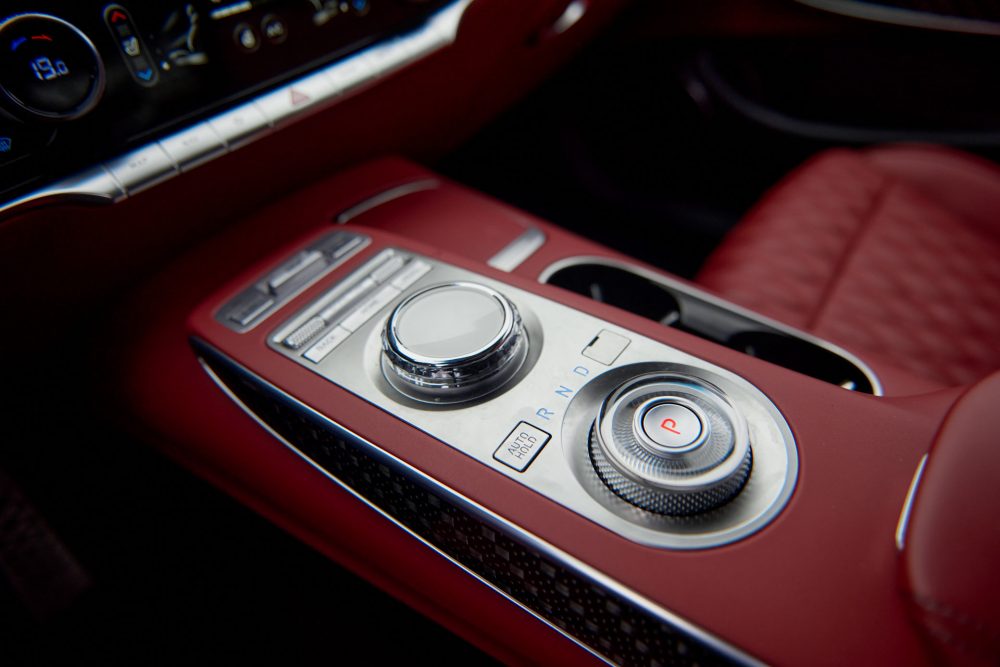 You can even use it to activate valet mode in the event that you need to let some punk park your vehicle while you’re out enjoying a fancy evening with your spouse. You can then monitor what that dipshit did with your Genesis from an app on your phone. 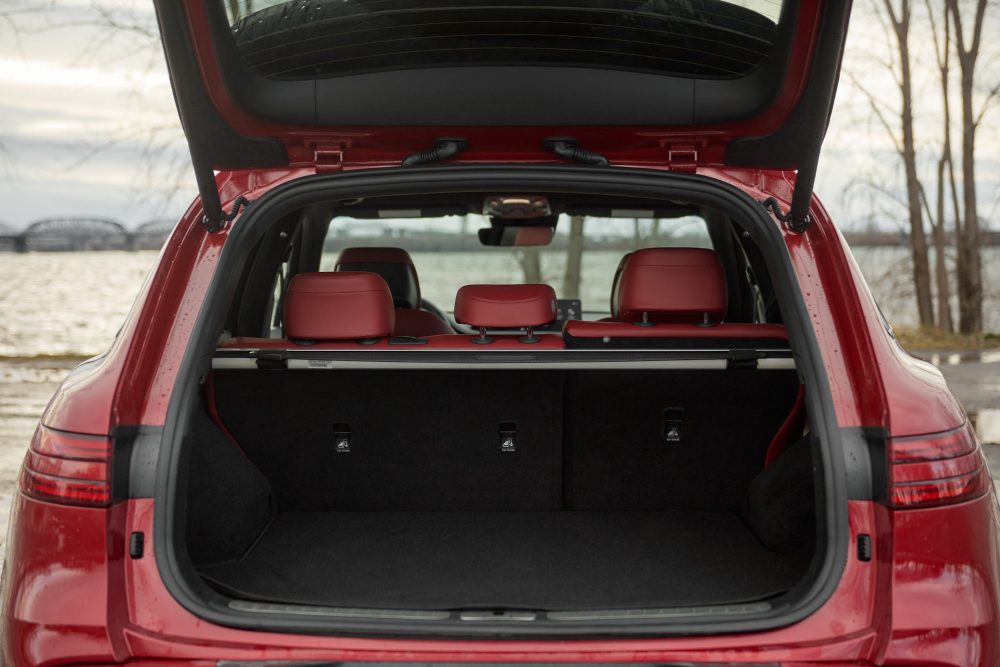 Such technology only represents the tip of the GV70’s unique approach to what a luxury vehicle should be. Genesis is capitalizing on the fact that it’s new and young to pioneer features that the larger luxury car brands don’t have the balls to release. And it’s paying off for Hyundai. In 2021, Genesis’s total vehicle sales in Canada and the US combined beat Alfa Romeo and Jaguar. It came almost neck to neck with Infiniti. Genesis’s secret is simple: offer a lot of luxury and quality at an aggressive price, but also rethink the way the consumer buys a car. 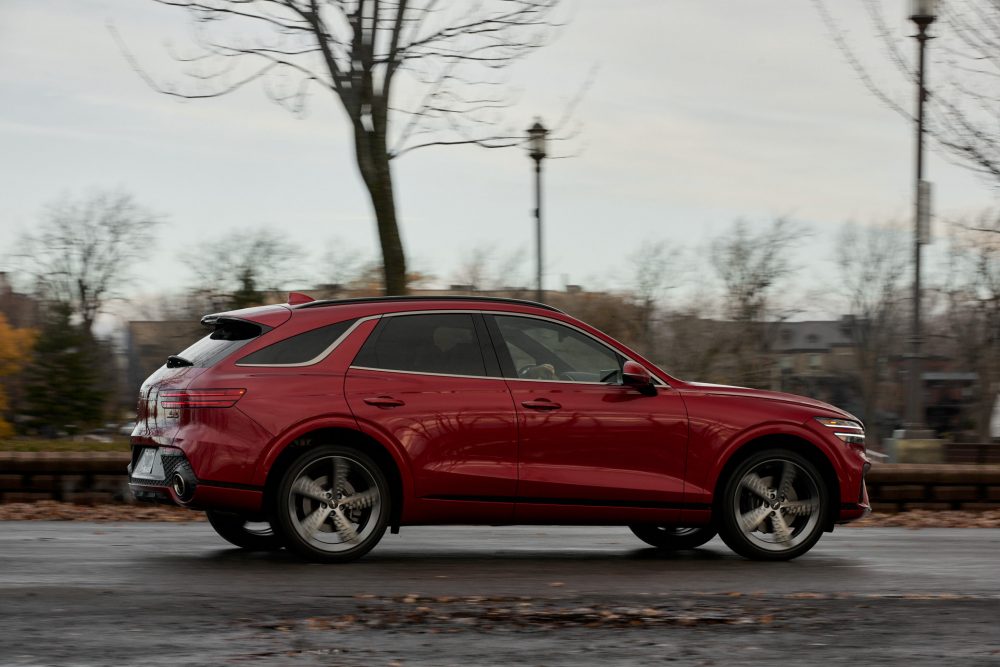 For instance, Genesis sells no optional packages. The cars are sold as all-inclusive trims and consumers can have their vehicle delivered straight to their home. And during the car’s entire warranty coverage, Genesis picks your vehicle up for you and lends you a loaner during maintenance. With this no hassle policy, Genesis capitalizes on Audi, BMW and Mercedes-Benz’ Achilles heal.