The 2021 Mazda3 can now be had with a fancy turbocharged engine and all-wheel drive. I mean, the last time we saw this in a compact car was in the Volkswagen Golf R. But while Mazda proudly says that this is not a new Mazdaspeed 3, the end product is just as good, if not better. 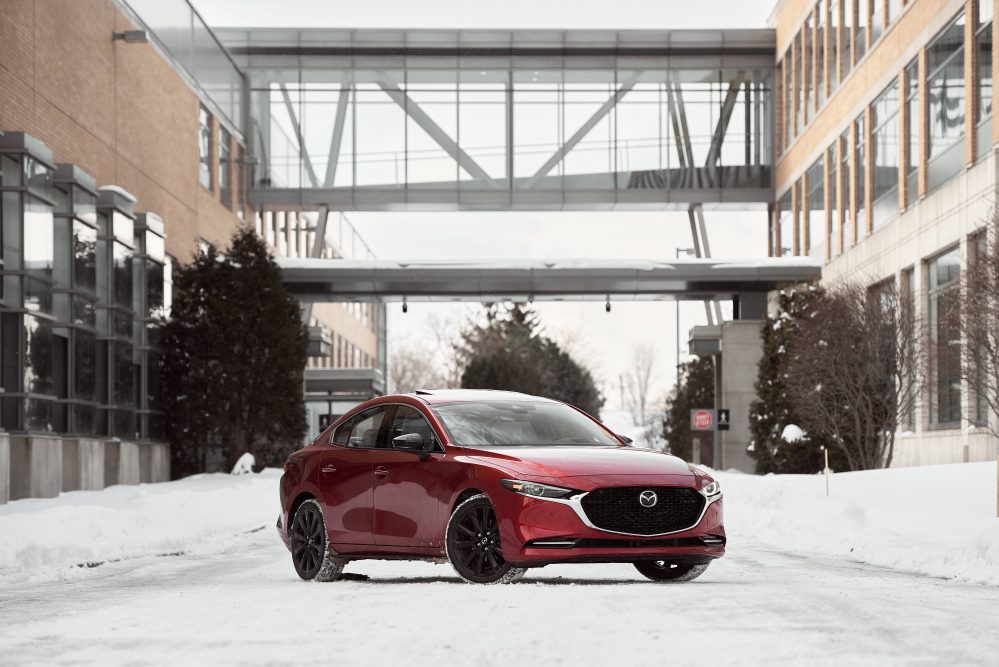 Since Mazda Canada had me drive both the Mazda3 Turbo sedan and hatch back to back, I decided to shove them both into this review. After all, except for their respective body shapes, they’re essentially the same car. It all depends if you’re more of a sedan or a hatchback kind of person. Personally, I’m not even sure which one I prefer. They both rock. 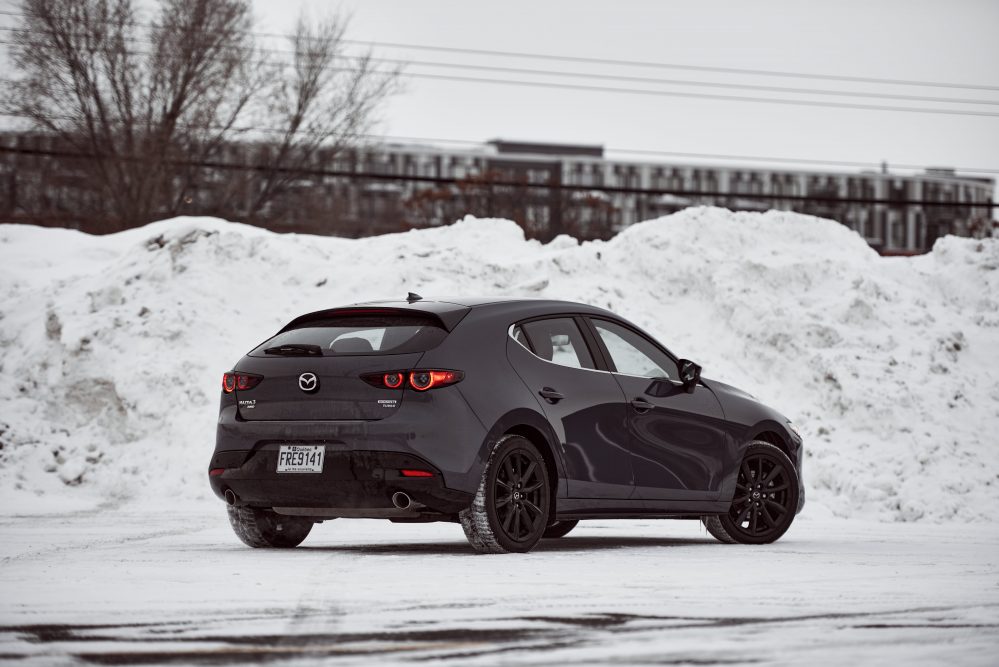 That, the fact that Mazda will sell you this great drivetrain in both body styles adds another arrow to the Mazda3’s quiver. In the industry, we call this a homerun. Mazda not only nailed the compact segment when it overhauled the Mazda3 in 2019, it just leapfrogged the entire segment with these two new additions. 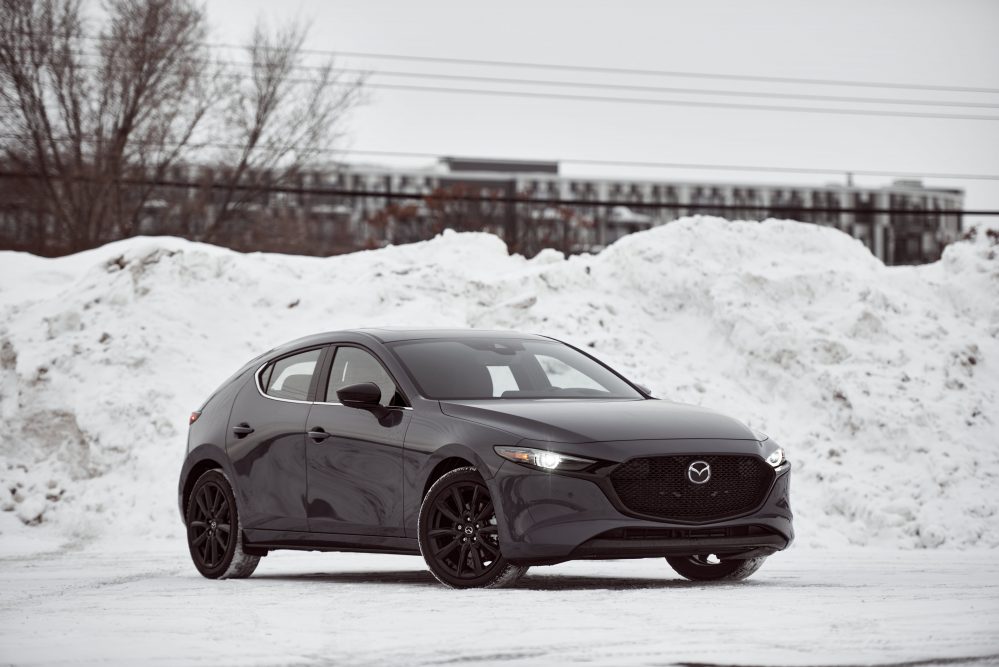 It’s also another step forward into Mazda’s mission to take on premium brands. Yes, little Mazda now wants to be premium, and the most recent examples of this effort – the Signature series CX-5 and CX-9 crossovers – have been rather convincing. In other words, the 2021 Mazda3 Turbo is set to take on cars like the Audi A3, BMW 2-Series, Cadillac CT4 and Mercedes-Benz A Class. 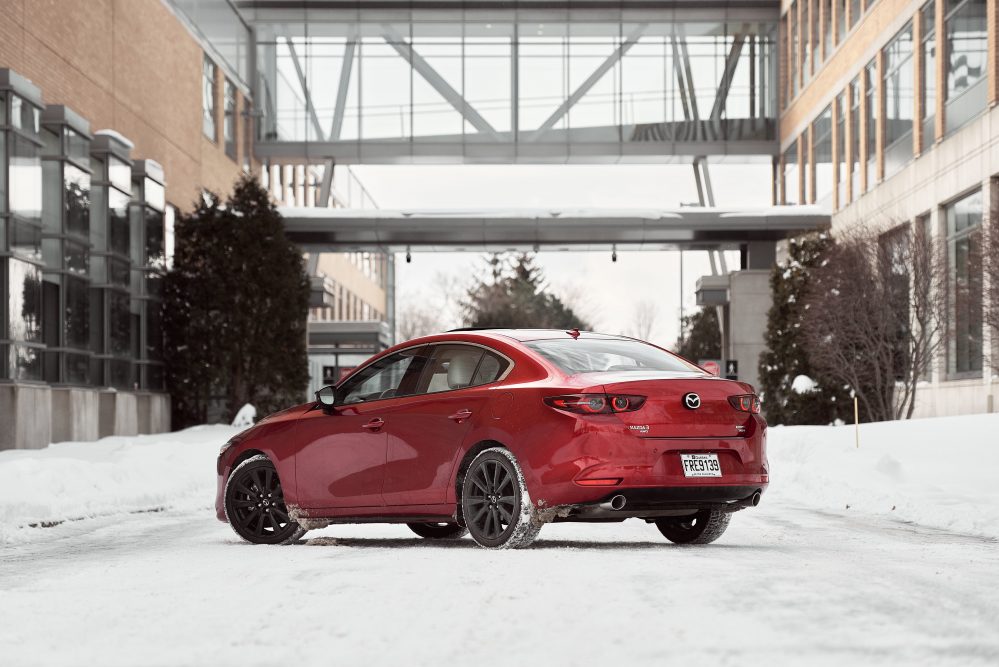 To get there, it the Mazda3 gets a forced-induction version of the standard 2.5-liter SkyActiv four-cylinder engine. Output climbs from 186 to a solid 250 horsepower, while torque sits at a Subaru WRX STI-stopping 320 lb-ft (up from 186 lb-ft). Take note, however, that these figures are only possible when running on 93 octane gas. When its fed with regular, 87 octane gasoline, the Mazda3 Turbo makes a more modest but still substantial 227 horsepower and 310 lb-ft of torque. 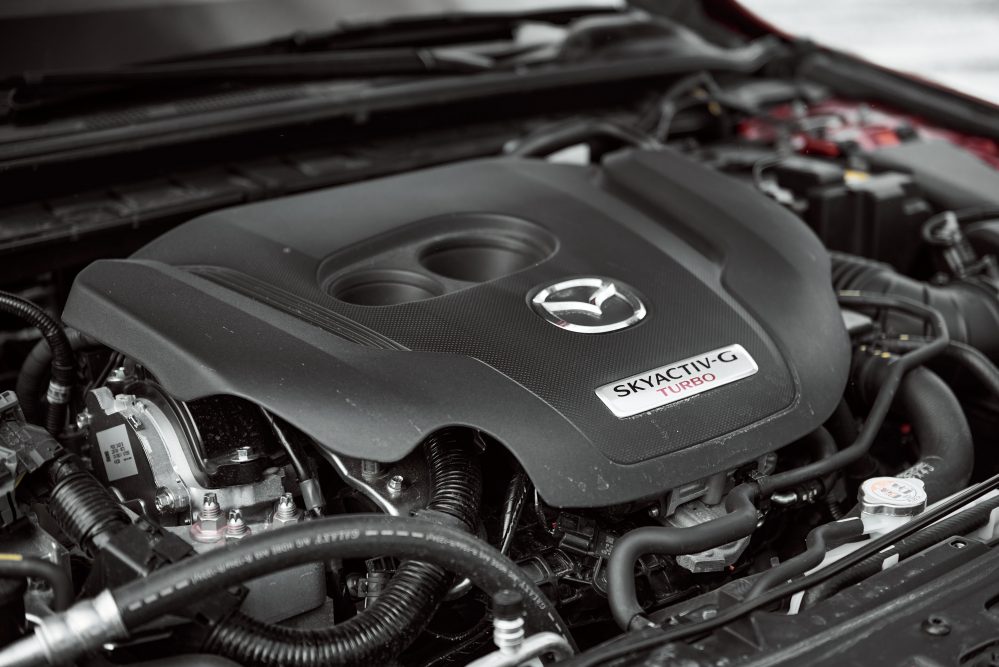 All of it is mated to a six-speed automatic gearbox. Sadly, a manual isn’t available with this package; a weird decision coming from the company that brought us the MX-5. All-wheel drive is also the only way to go with the turbo engine. Acceleration from 0-100 km/h, according to Mazda, is achieved in a brisk 5.6 seconds on 93 octane. 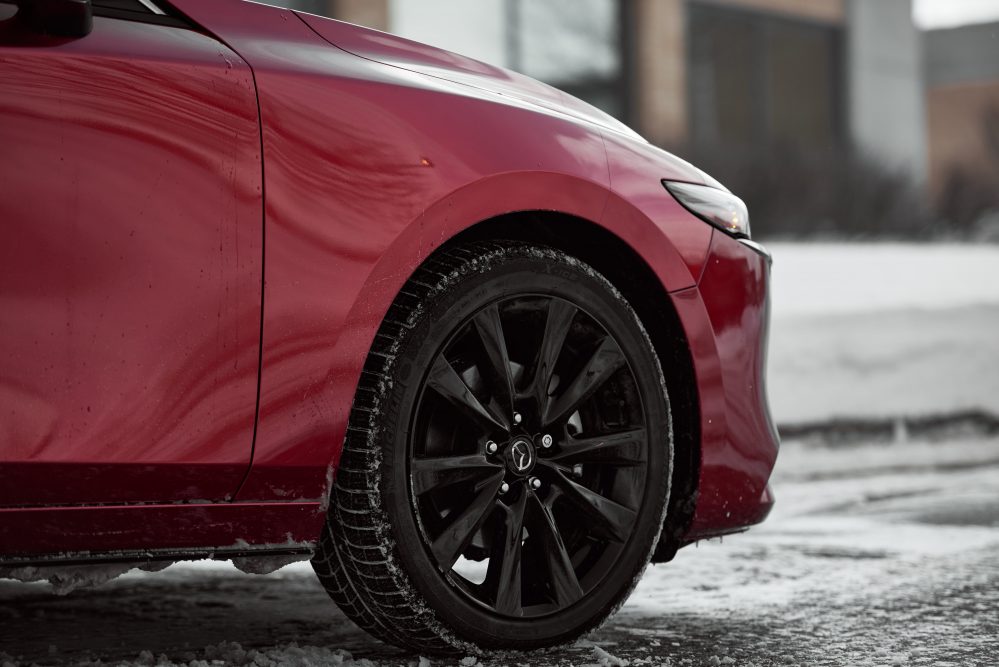 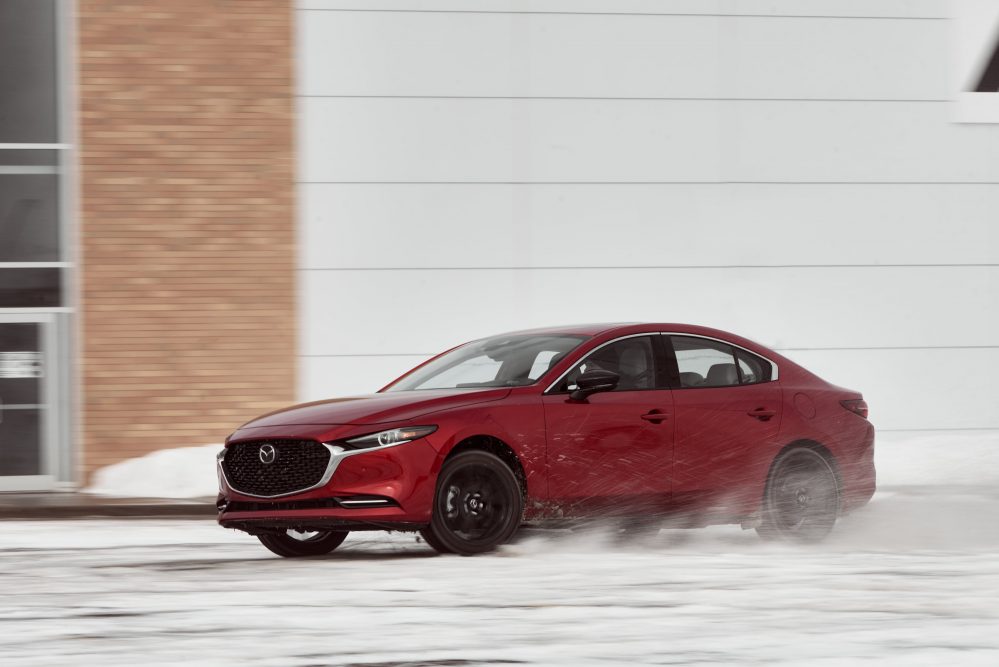 But don’t expect all of this furious might to feel like you’re driving an overpowered small car. Contrary to the Mazdaspeed 3, which would destroy your wrists from too much torque steer, the 2021 Mazda3 Turbo manages its newfound performance with grace and utmost maturity. Sure, you know you’re going fast, but it’s never dramatic or eventful. It just gets the job done. 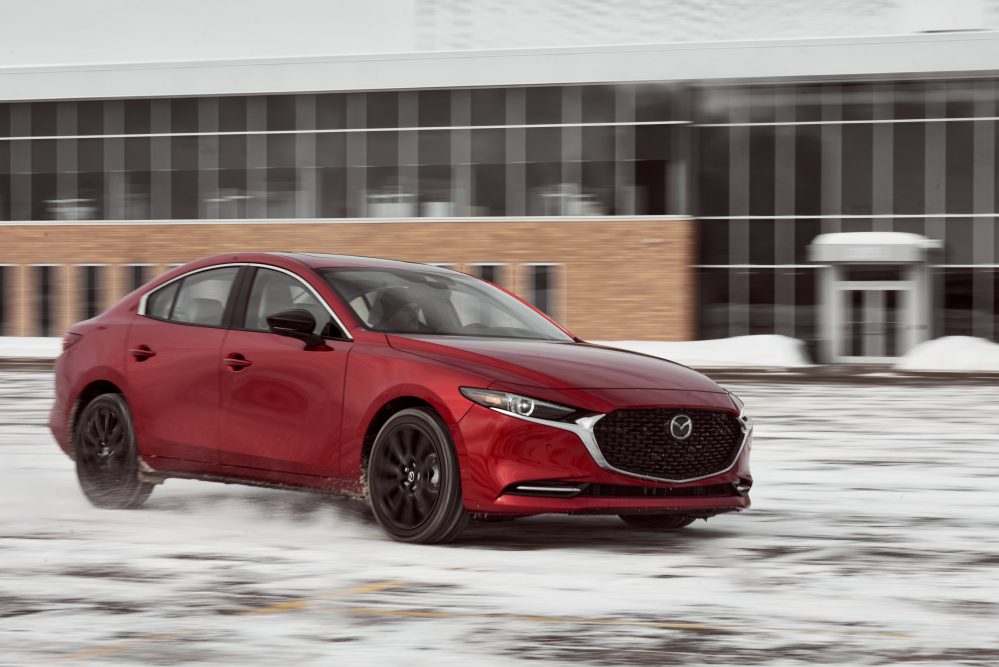 And by done, I mean done. Stomp the accelerator pedal from a standstill with traction control off on a snowy surface, and the 3’s front wheel-spin is barely noticeable as the car’s reactive all-wheel drive system (Mazda actually developed a hybrid between a reactive and predictive system) picks it all up and allows this slick little bugger to jolt forward at German-conquering speeds. 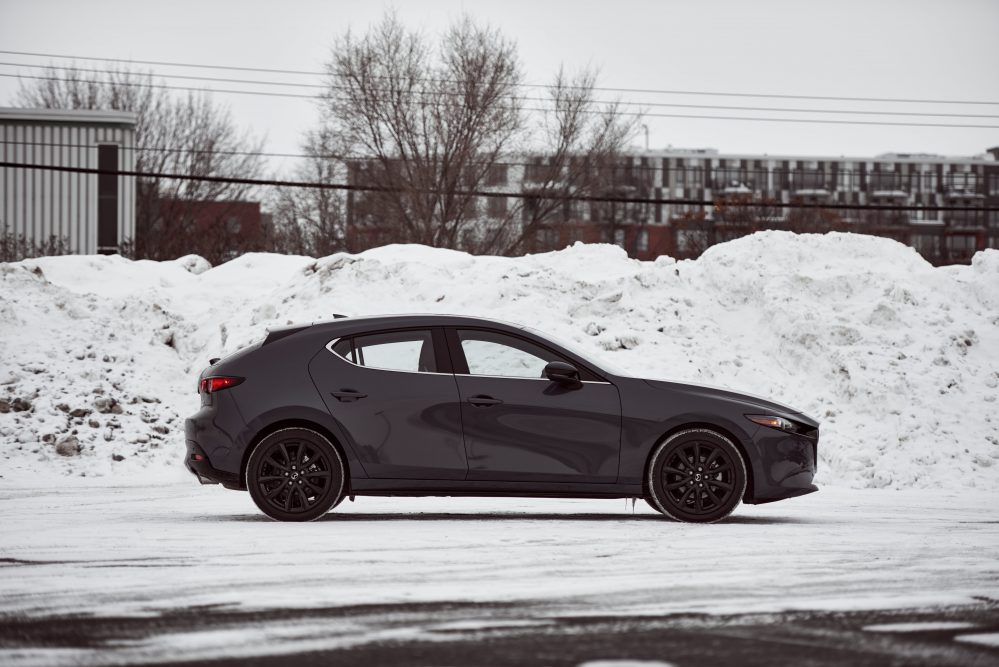 The Mazda3’s chassis was already stellar to begin with. All it needed was more power and Mazda delivered. This is a solid small car, one that feels just as expensive as what Audi, BMW and Mercedes-Benz will sell you. It’s well built and  tuned to the finest details. Drift powerslides are performed at the flick of the steering wheel. Keep that right foot planted, and the transmission hands you over the proper cog in an almost telepathic manner. Sure, I do wish I could shift for myself – because Mazda builds fantastic manual transmissions – but this setup is still damn good. 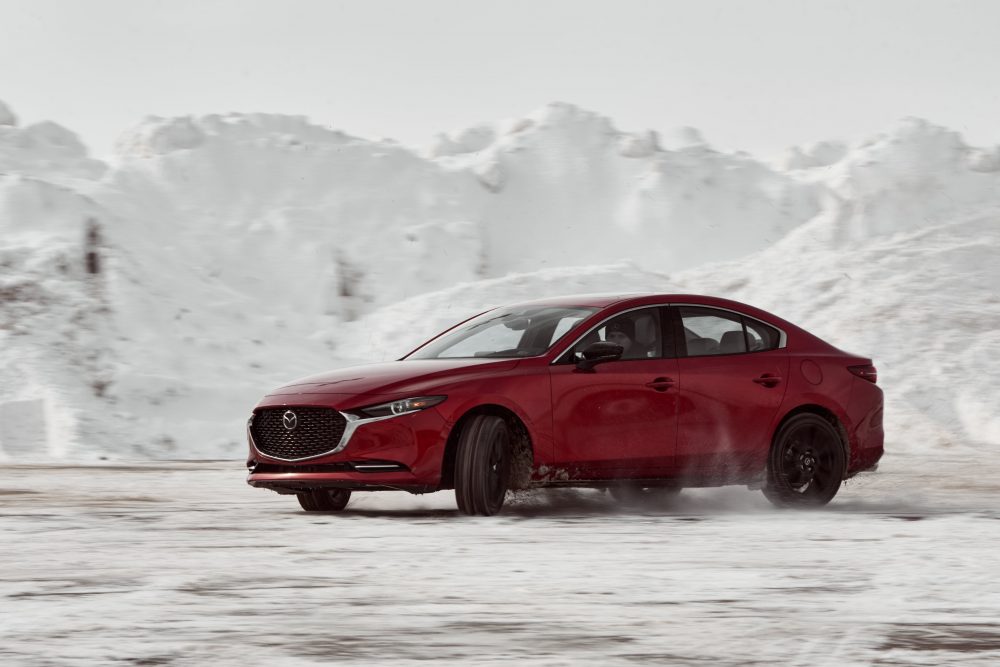 Out there on the road, you’ll have a blast flinging the Mazda3 turbo onto highway offramps. Its chassis is stiff, its suspension is the right kind of compliant and there’s a pleasant sense of fluidity in the way its steering was calibrated. It all feels as tough the car envelops you, inviting you to go for a long drive. And while I’ve never been a fan of pumped in engine audio, Mazda manages to make this one sound half alright. Although it sounds awfully similar the Volkswagen’s Soundaktor system in the Golf GTI / Jetta GLI. 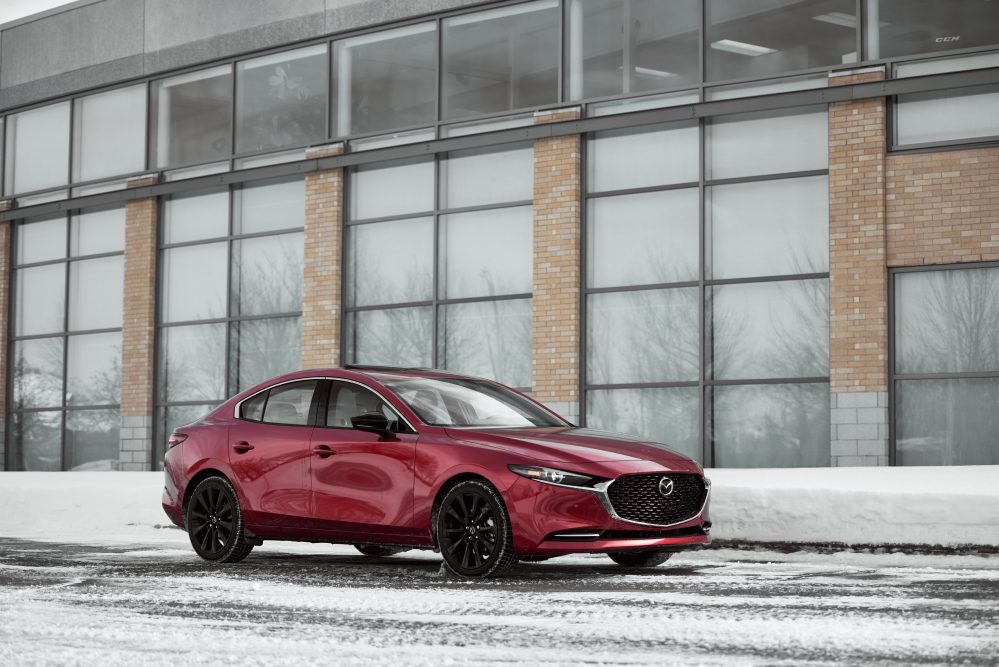 That, Golf GTIs, are the kinds of cars you’ll be happy to humiliate at the wheel of your Mazda3 Turbo. Yet, nobody will notice, because it looks just like any other well-equipped Mazda3. The only things revealing its turbo heart are its twin exhaust pipes and the subtle “turbo” logo that was slapped on its trunklid. But that’s all fine, because the Mazda3 styling is absolutely bang on. Clean and understated. This is arguably the prettiest small car currently on sale. 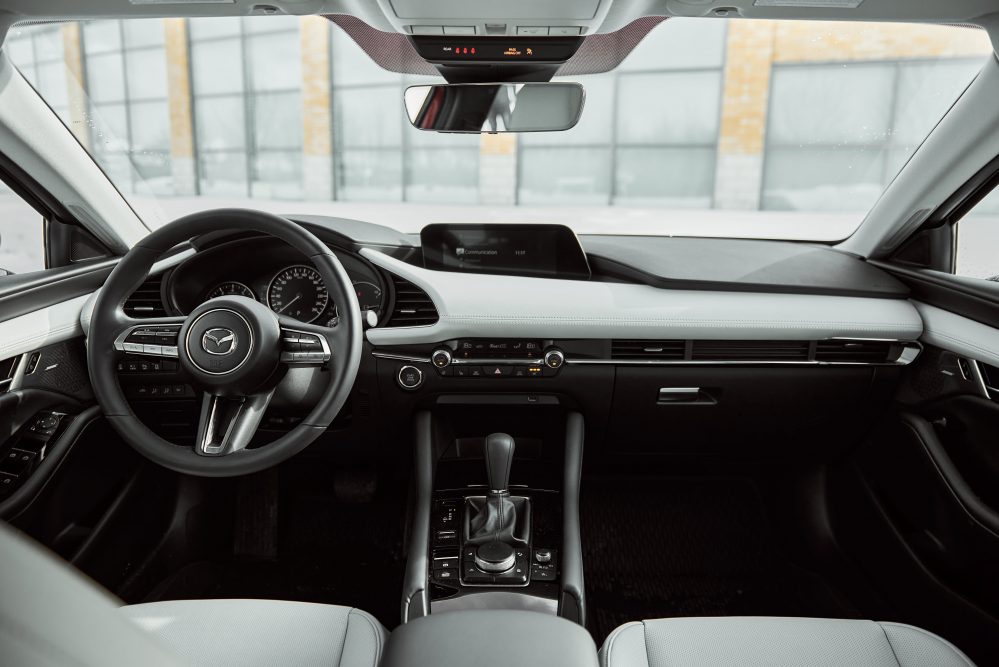 Step inside and the Mazda3 continues to convince you that it has what it takes to take on the European elite. Build quality is second to none, the materials used are of exquisite quality and there’s an overall sense of sensual craftmanship here that can’t be ignored. 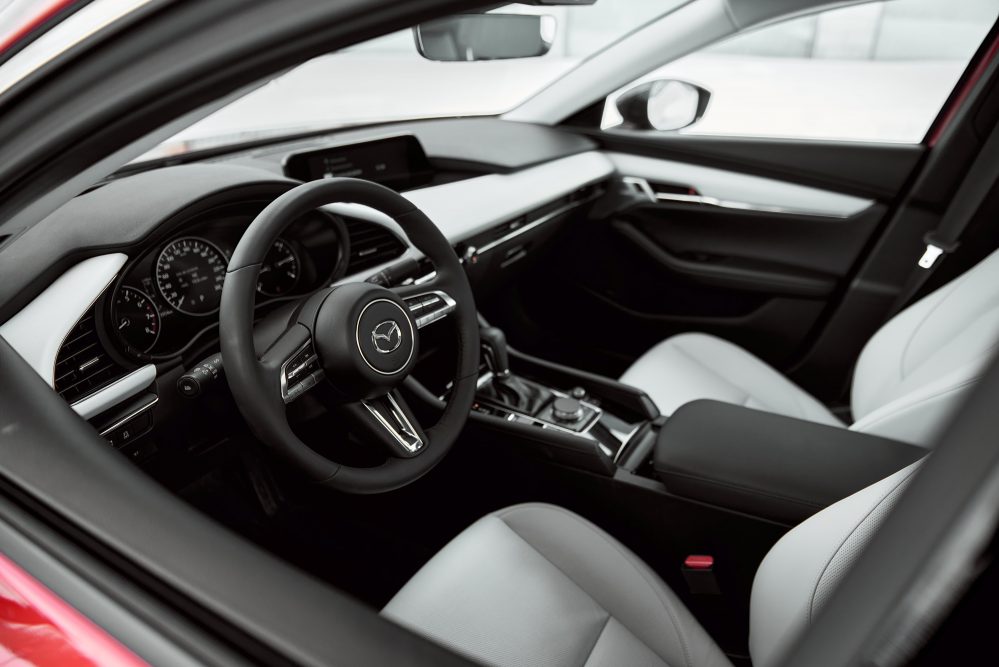 But the Mazda3’s Achilles heel, especially in hatchback form, remains its closed quarters interior. While that snug feeling is a good thing from a driver’s standpoint, overall passenger and cargo space is tight, especially when comparing with cars like the Honda Civic or the Nissan Sentra. Visibility is also a problem in the hatchback due to thick C pillars. It’s better in the sedan, sure, but that stubby rear end is high, which hinders some of the car’s rear visibility. 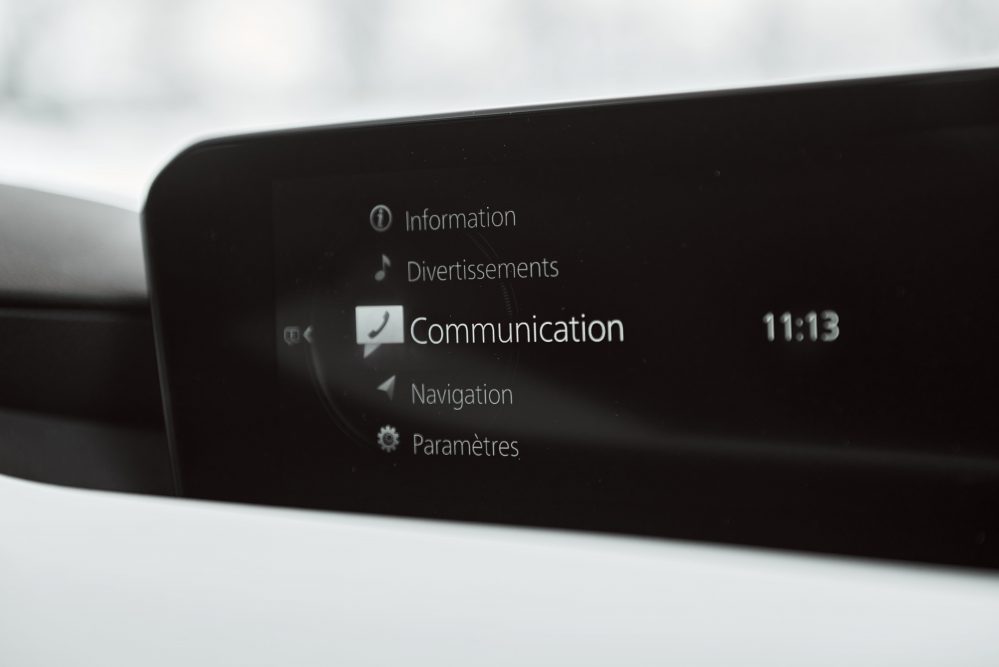 Mazda Connect, the brand’s infotainment system, has made huge strides in modernity and available features, but it came at the cost of reduced user-friendliness. To its defense, the rotary knob dial setup is still one of the greats, on par even with BMW’s iDrive system. But the interface itself remains heavy in information. 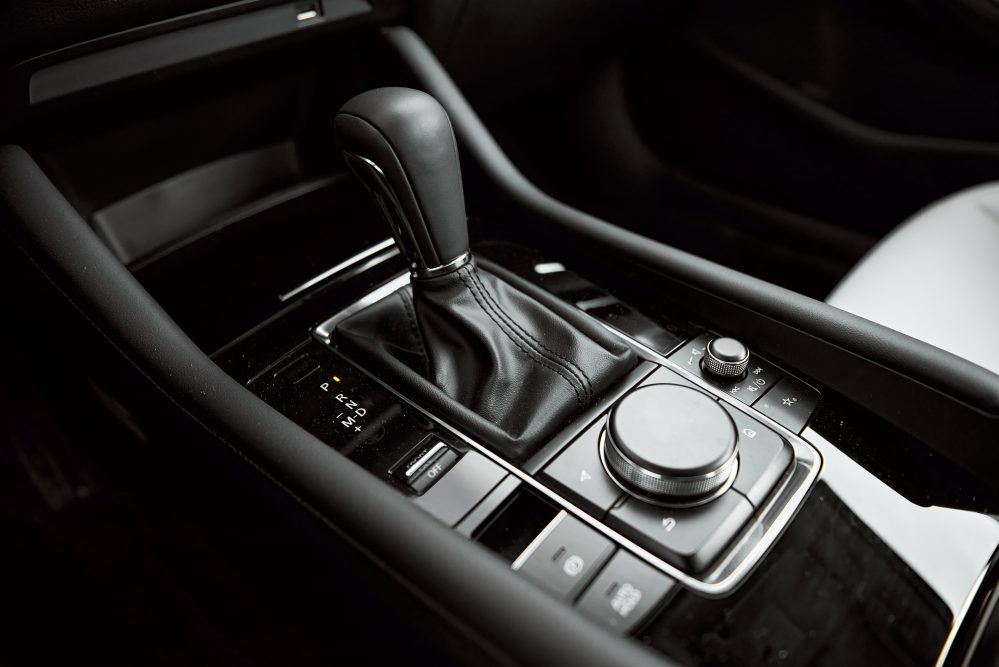 Some simple tasks like changing radio stations in SiriusXM require to add them to your favorites first. And it often requires cycling through several menus before finding the information you’re looking for. This can however all be fixed through a board meeting, because the system’s processing power, speed of execution and ergonomics are second to none. 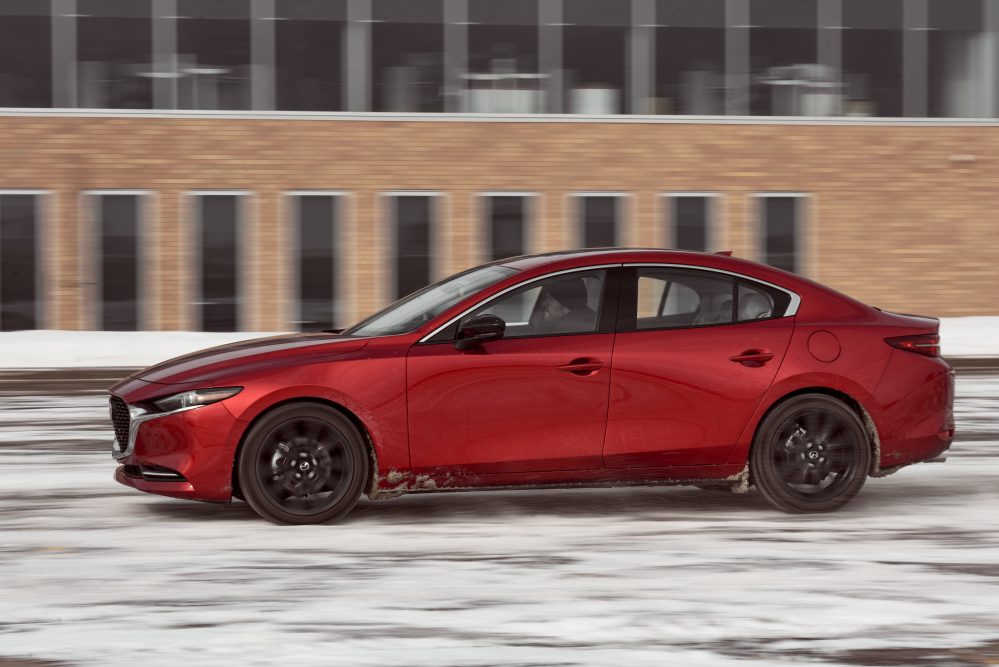 If you’re in the market for an affordable and fun sport compact car, perhaps the Honda Civic Si or Golf GTI are not longer the default go-to cars. Sure, the Mazda3 Turbo is missing a manual transmission, and perhaps it needs to be a littler louder. But there’s no denying how capable its newfound turbocharged soul is. If anything, this may very well be the most mature sport compact car currently on sale.

Review of the 2021 Mazda3 Turbo by William Clavey
Compact Cars