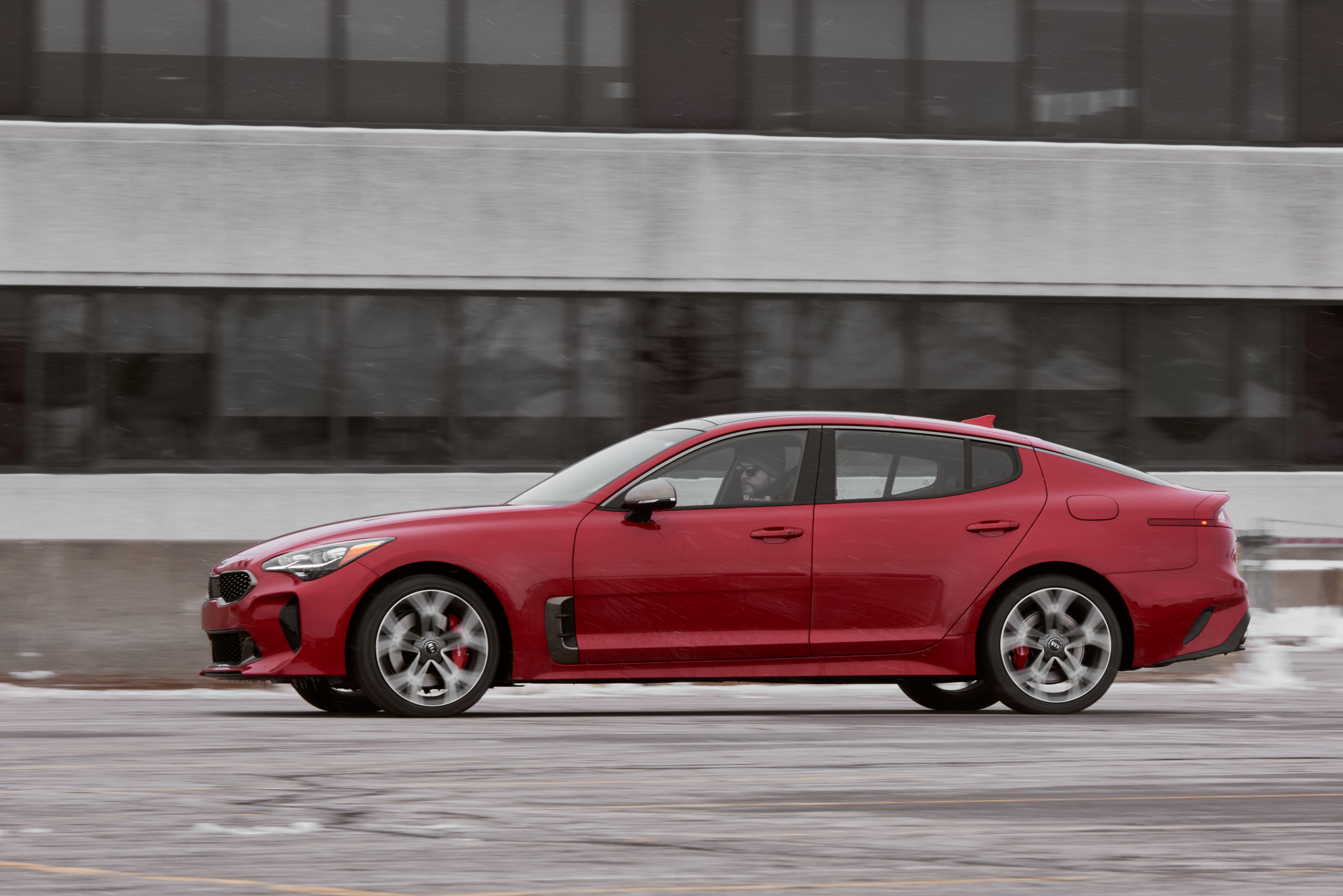 You guys already know what I think of the 2021 Kia Stinger GT. But what really hit me like a ton of bricks when I drove it for the fourth time in my career, was that it’s already becoming a future classic. Because in the future, we’ll all look back at the Stinger the same way we currently look at the first BMW M cars. Very much like BMW’s ultimate driving machines put the BMW brand on the map, the Stinger will go down in history as the first real high-performance Kia. 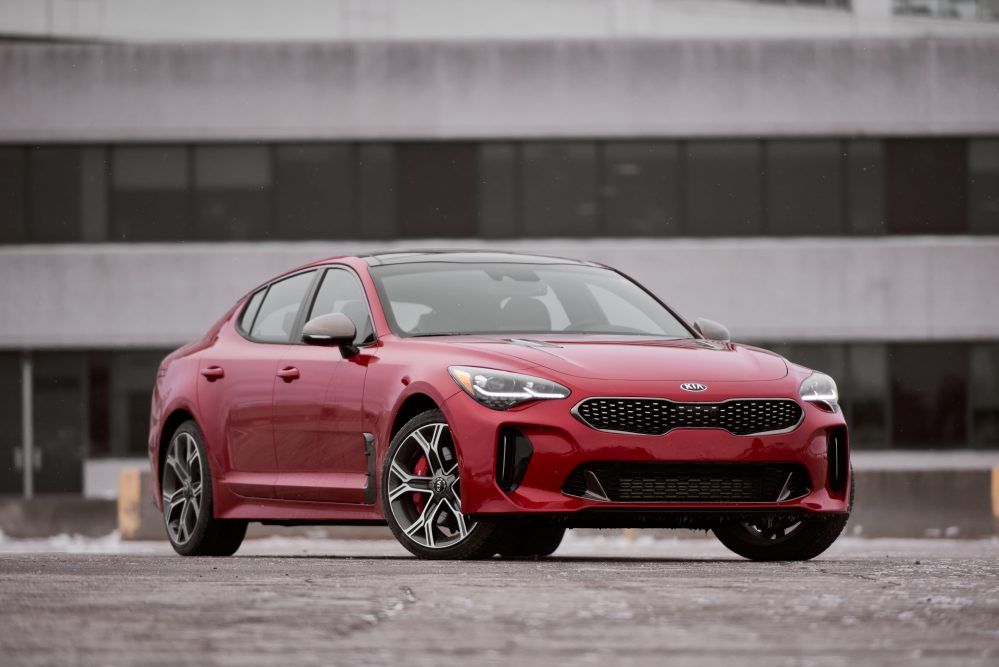 It’s also fair to say that the 2021 Kia Stinger GT’s styling will age well. Even three years into production, it still looks modern, fresh and properly attractive. That’s thanks to Peter Schreyer’s original design, the same dude that penned the original Audi TT. The Stinger is one of those rare “concept car for the road” events that doesn’t happen often in this day and age. 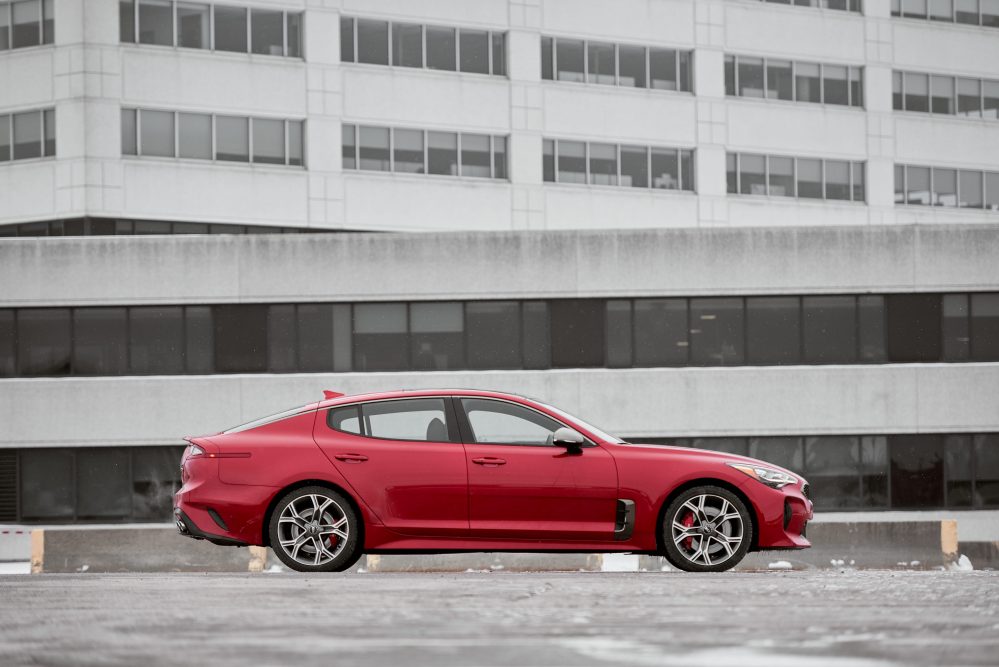 I tell you, it felt good to sit my ass inside a genuine sport sedan after driving so many trucks and SUVs. It was also refreshing to not see a German badge slapped onto it. In case you still count yourself among the skeptics who think the Stinger is all show and no go, it’s time you catch up with the facts: the 2021 Kia Stinger GT is a genuine performance machine, one that mimics cars like the Audi S5 Sportback or BMW M440i Gran Coupé, but for a considerably more attainable price. 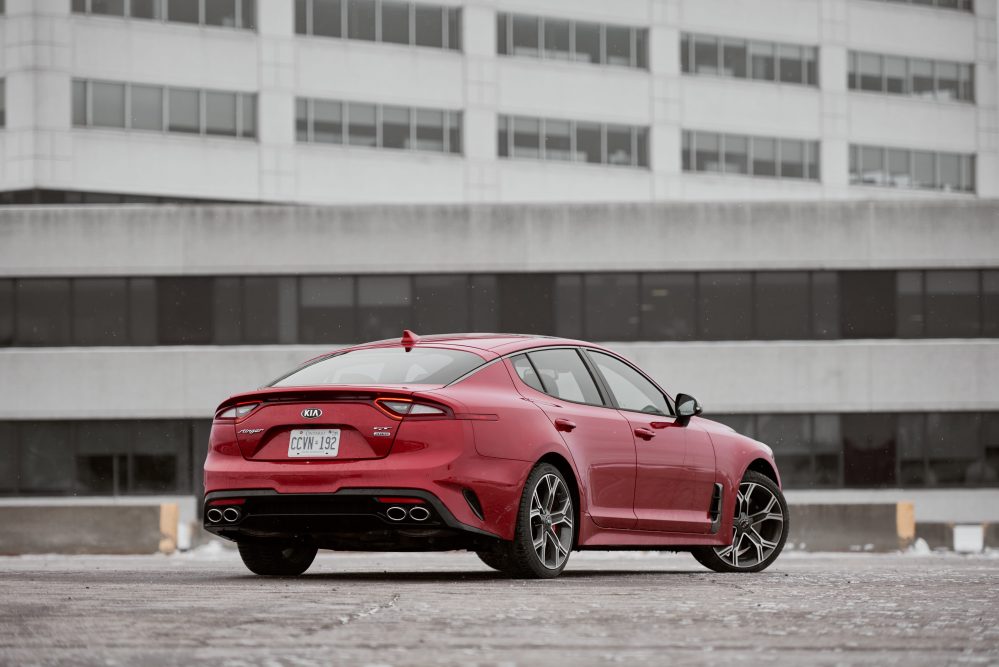 I’ll get back to how the Stinger fares versus its German competition in a bit. Meanwhile, what you need to know is that it rides on a stretched version of the Genesis G70‘s rear-biased architecture. However, here in Canada, all Kia Stingers come equipped with all-wheel drive. There used to be a four-cylinder model called the GT Line, but that car was discontinued only a year after being released. If the Stinger GT becomes a classic, the four-cylinder model will definitely be the most sought after variant. 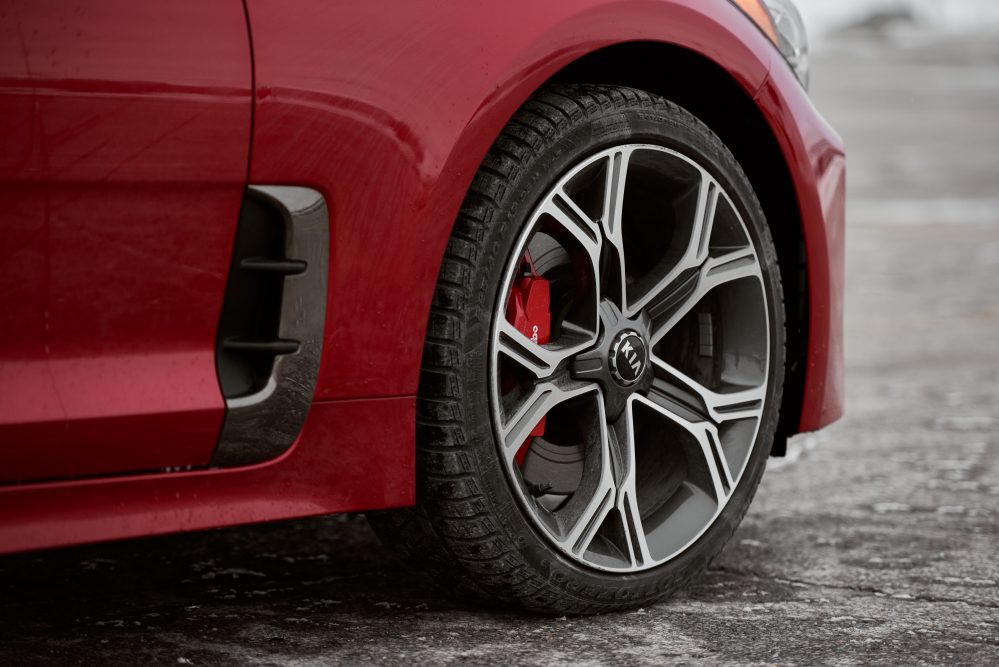 Another reason the Stinger has a solid chance of becoming a collectible is that Kia may soon kill it off. After all, the Stinger’s original mission was always about being a statement, not raking in profits. To put things into perspective, ever since it hit our market in 2018, Kia only managed to ship about 48,000 units in the US and Canada. Meanwhile, it sold twice as many Sorentos in 2019 alone. Kia could therefore pull the plug in this thing very soon. 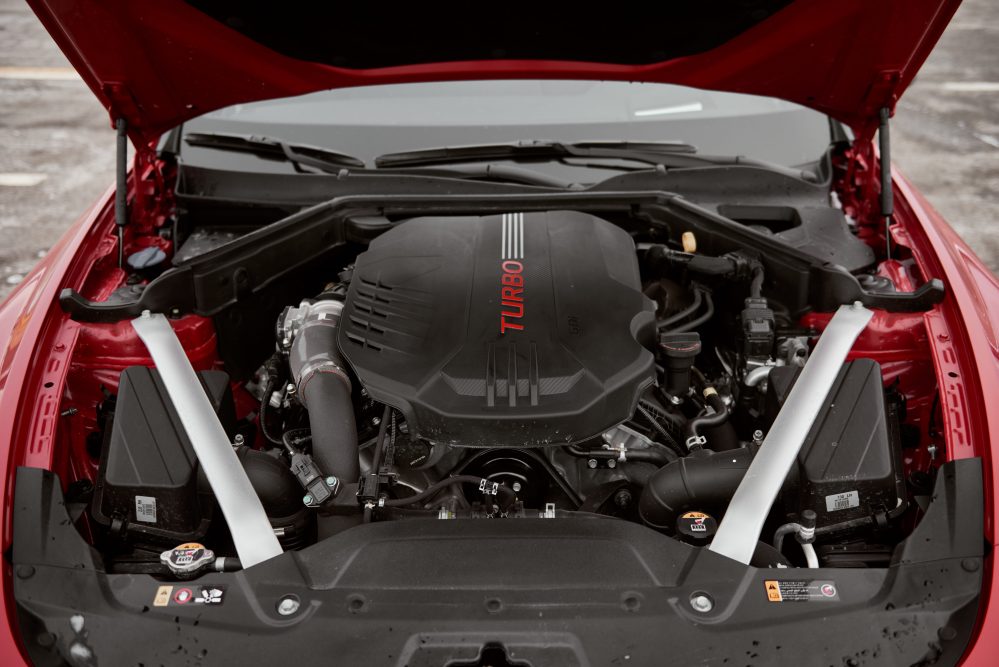 And it’ll be a shame, because many people will have missed out on a brilliant sport sedan with decent power too. All Stingers come standard with a twin-turbocharged 3.3-liter V6 good for 365 horsepower and 376 lb-ft of torque. It’s all mated to an eight-speed automatic gearbox. Once you’ve activated the Stinger GT’s launch control sequence, it’ll rocket itself out of the hole and onto 100 km/h in a brisk 4.5 seconds. That’s quick by any standard. 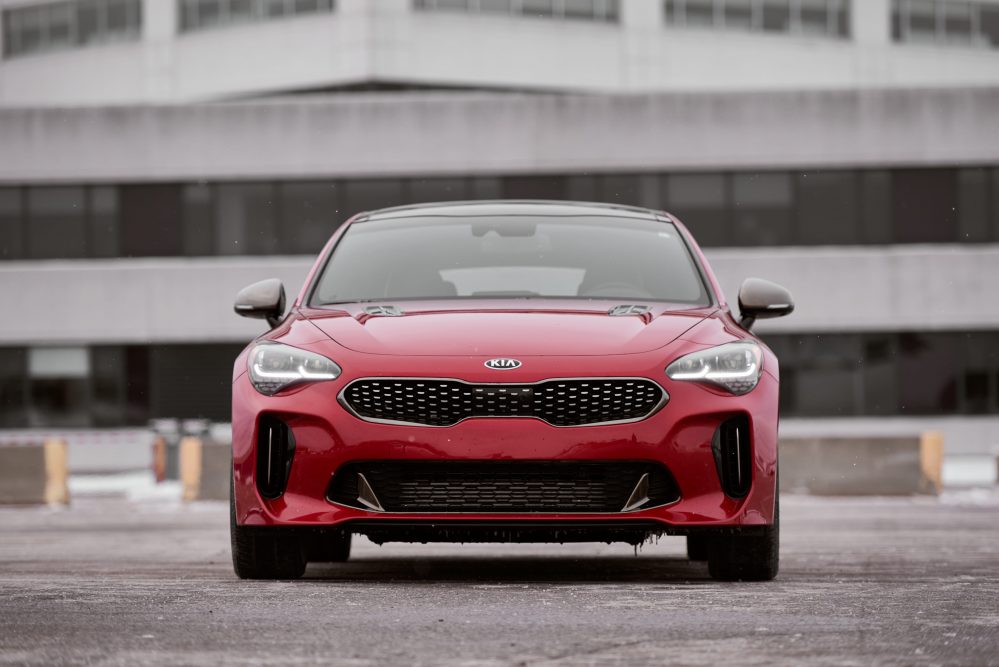 The 2021 Kia Stinger GT is also cleverly priced. Kicking off at $46,905 already fully loaded, and never exceeding $55,000 once all the bells and whistles have been bolted on, it makes a compelling case for not getting an Audi or a BMW.

Not Exactly An Audi, But… 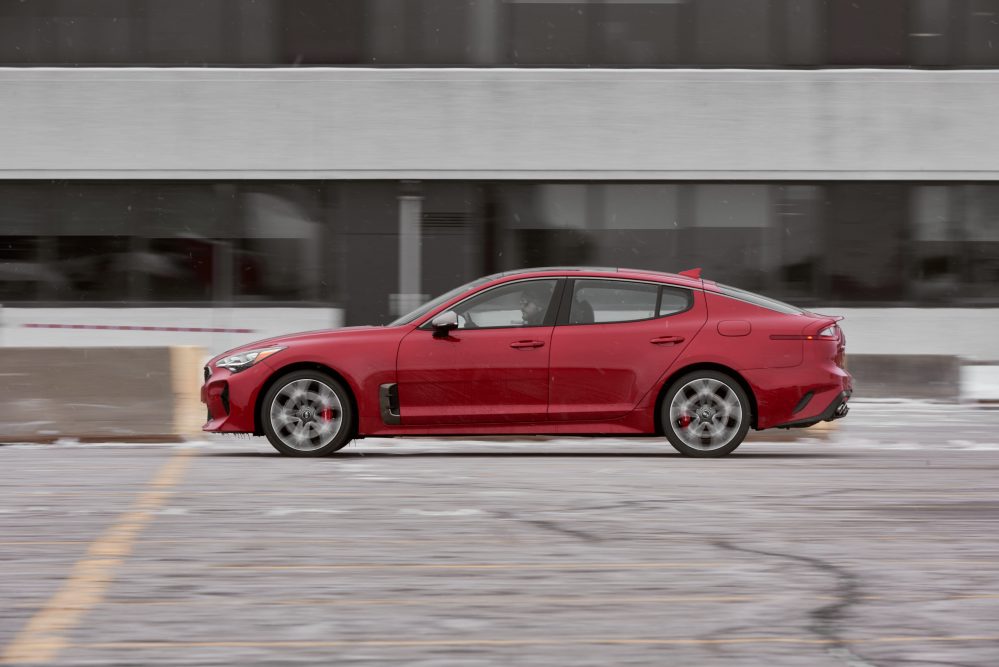 At this point I can already see Audi and BMW owners screaming at their computer screens that this Kia is nowhere near as good as their car. And they’d be right. I mean, the 2021 Kia Stinger GT doesn’t have the brand recognition nor the level of luxury of its rivals. But it doesn’t prevent it from being a damn good offering, one that manages to carve its own niche. 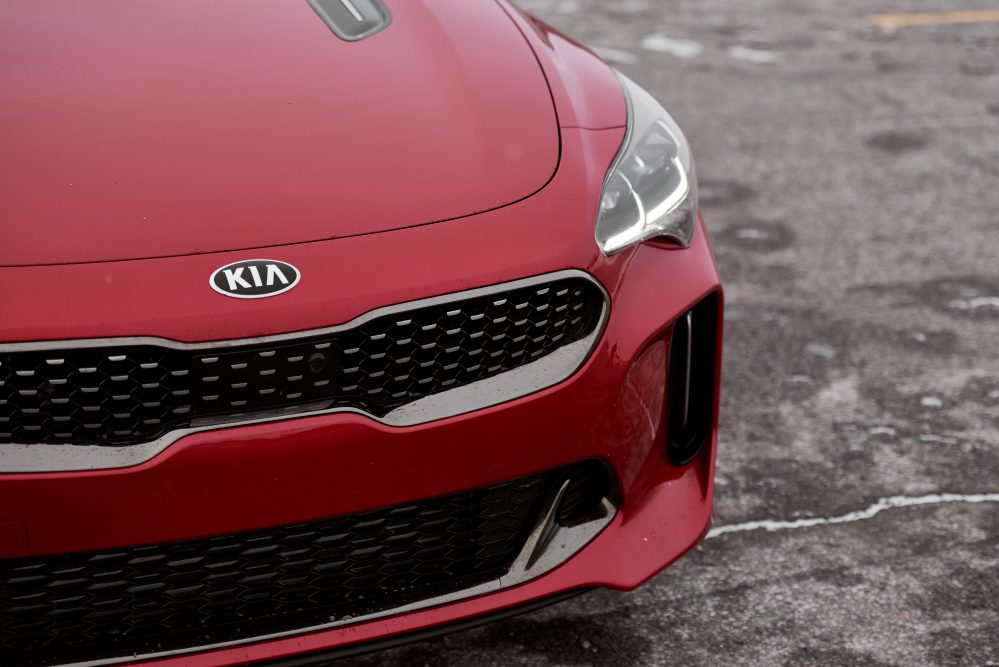 Instead, it doesn’t really have any competition. The Stinger GT sits on the fence between a Dodge Charger and a German alternative. It’s quick off the line, but also a lot softer and more compliant than something Bavaria would give birth to. And when it’s not set to Sport mode, its transmission quietly shuffles through gears in the background while the ample torque provided by the force-fed V6 allows for effortless highway overtaking. 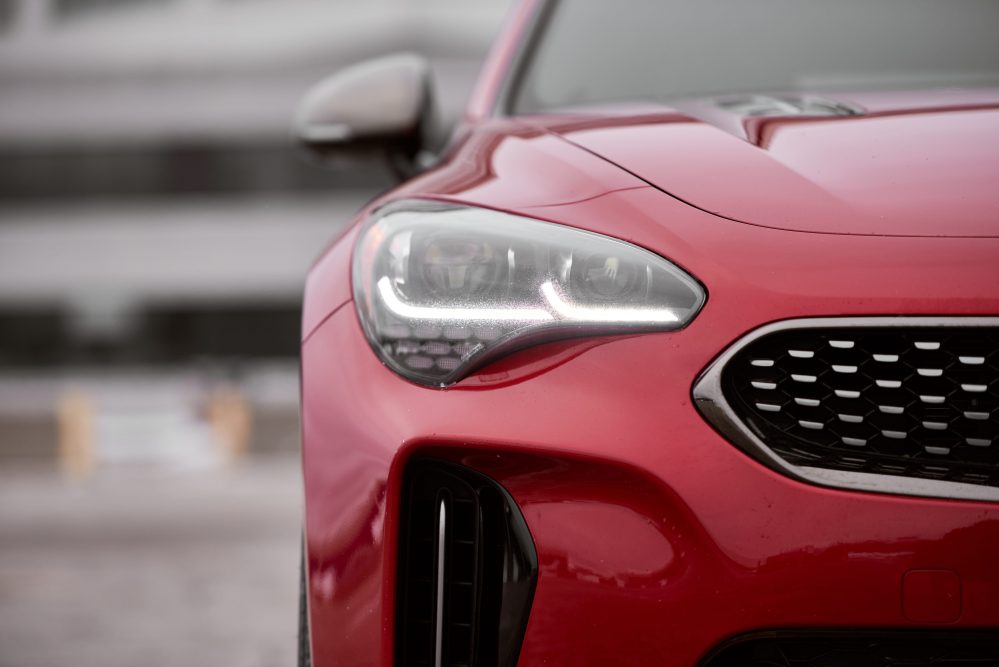 Oh, did I forget to mention that its hatchback configuration leads to as much cargo space as some crossovers? In many ways, the 2021 Kia Stinger GT leans more towards the grand tourer category. And that’s also why it feels so unique. 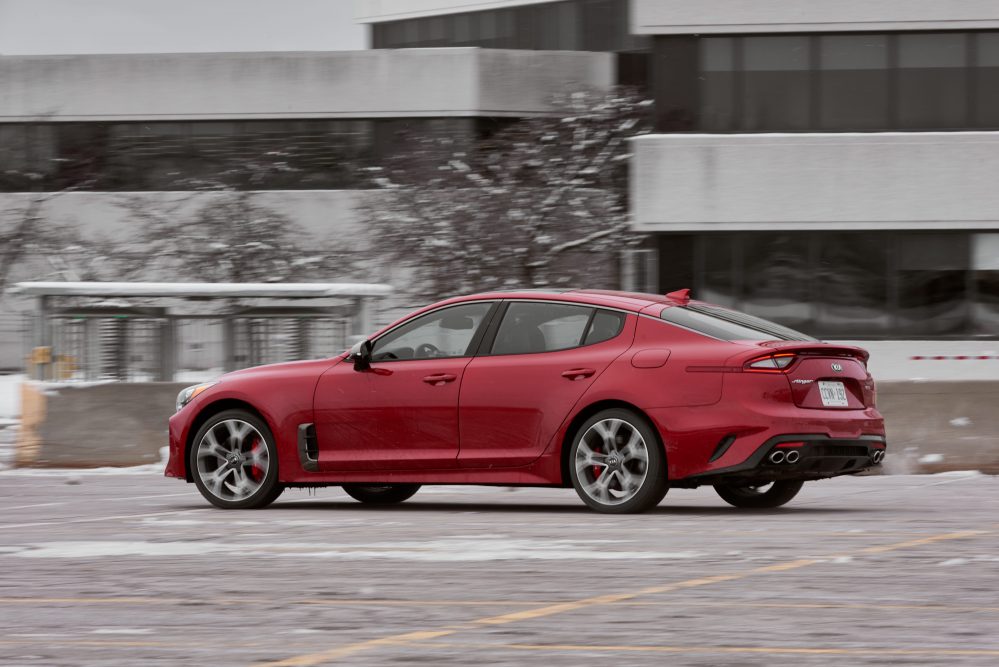 Because it works wonderfully as as a daily driver. The rear seat is spacious for adults, while the entire car feels plush, comfortable and impeccably well put together. And while I would have liked a bit more precision from its steering and chassis – I also absolutely hate its synthesized engine sounds – you can’t deny the Stinger’s brilliant balance of performance and comfort. 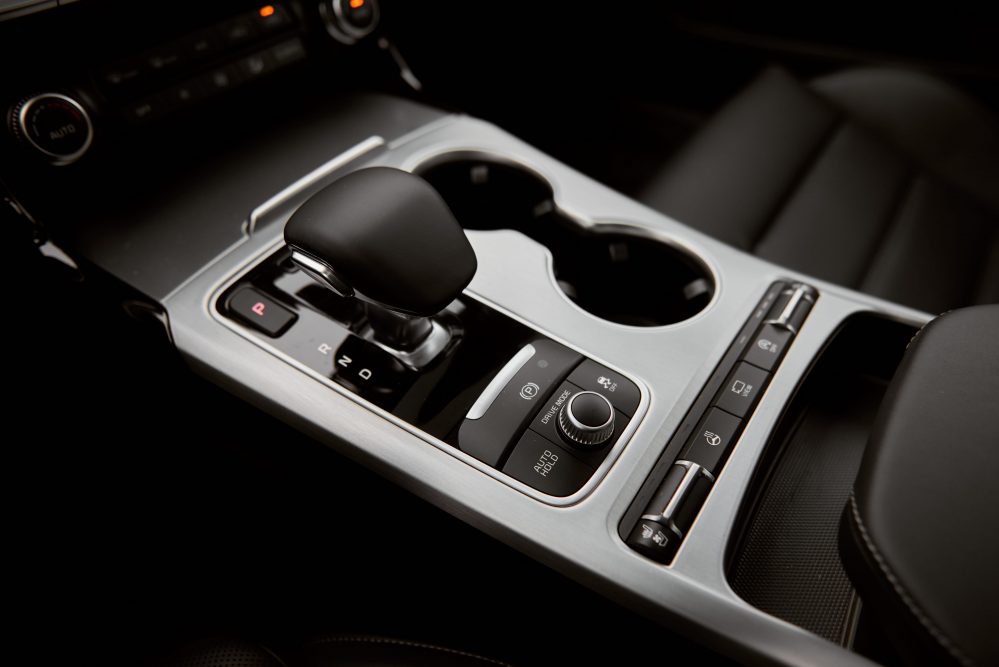 Like, this is why old BMWs are so praised. Wait, isn’t the man behind the Stinger’s chassis and suspension calibration  a dude called Albert Biermann? And Albert, well, he used to calibrate the suspensions on BMW M cars. 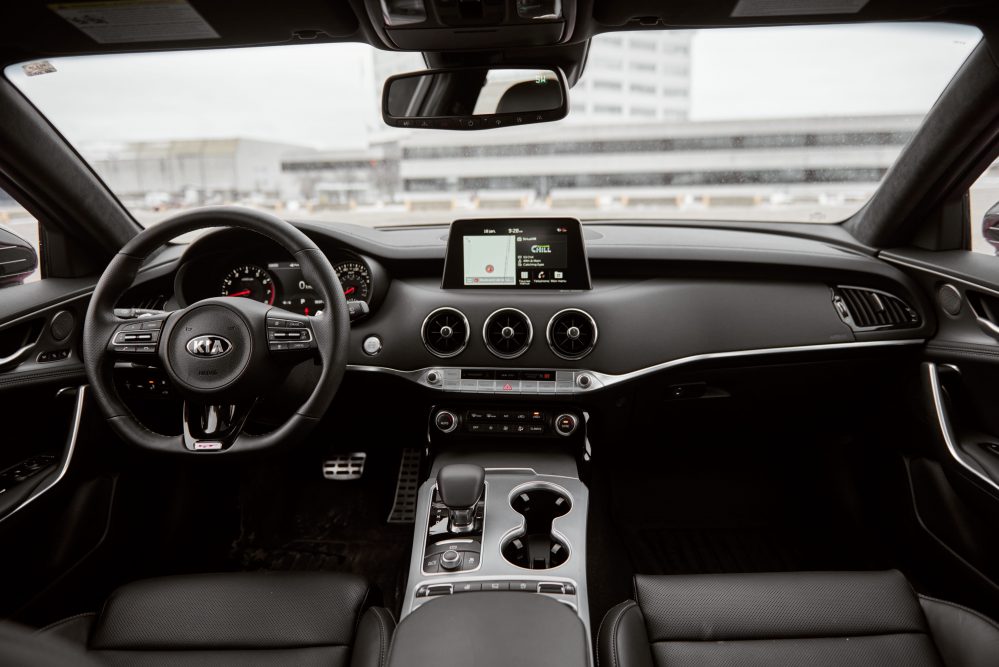 The 2021 Kia Stinger GT has a spartan, yet well put together cabin, with a clean tri-circle air vent design that mimics the first generation Audi TT – a throwback to Schreyer’s past creations. Build quality is spot on, materials are fine, but they never attain luxury levels of quality. 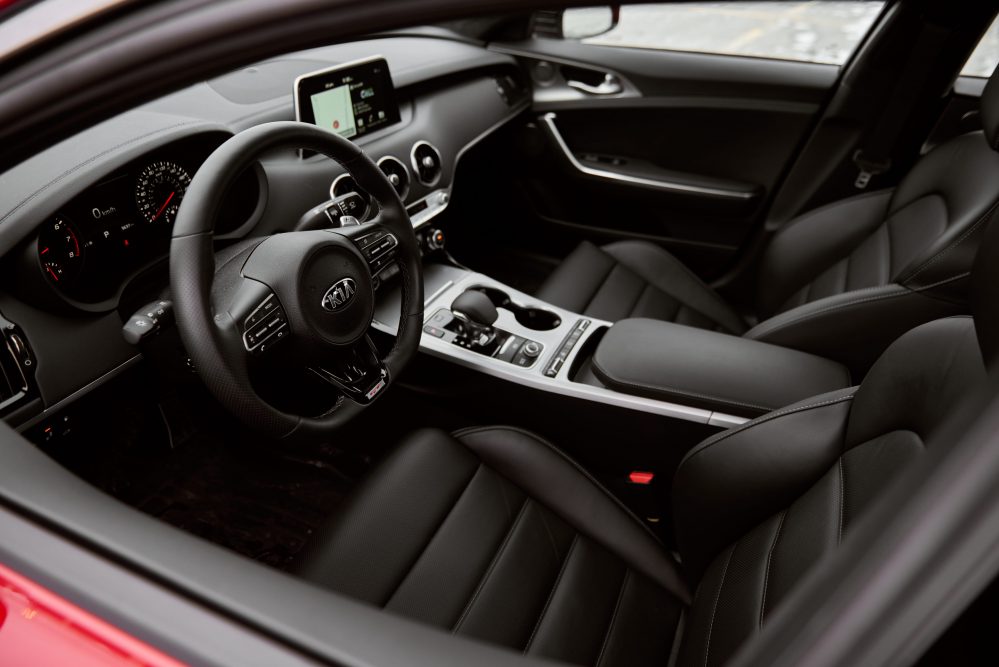 That said, in typical Kia fashion, everything is easily accessible, simply laid out and effortless in operation. This common sense approach is apparent in all of the Stinger’s switchgears, menus and gauges. I also adore the thick and meaty flat-bottomed steering wheel. Everything just works in this car. 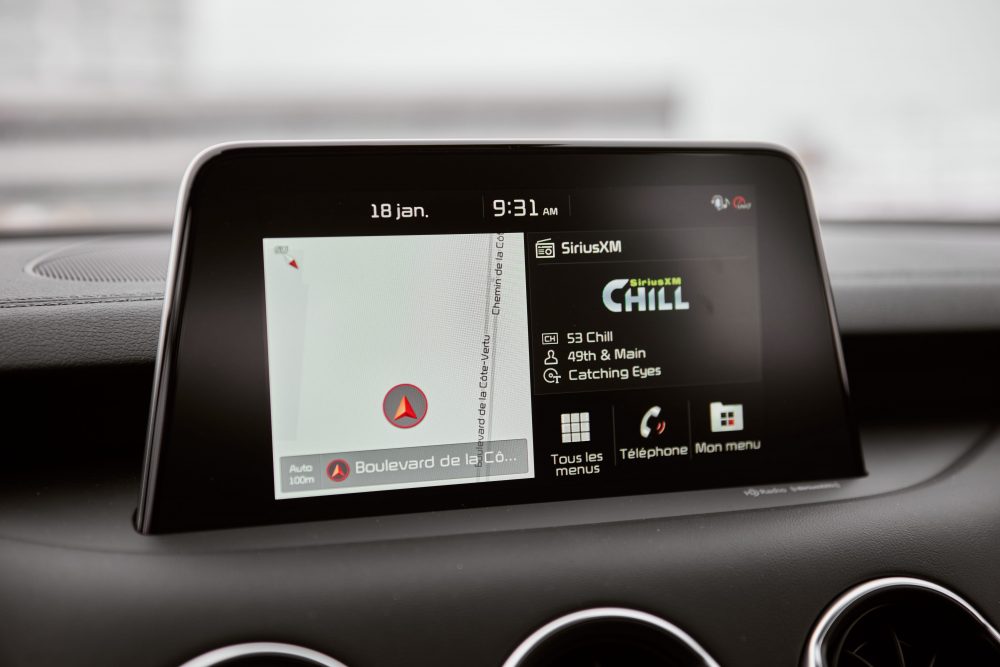 While the Stinger’s infotainment system is showing some age next to Kia’s latest interfaces, it’s still easy to comprehend, quick to respond and downright a breeze to operate. Icons are enormous, and accessing its information is never frustrating. And if using touch controls isn’t your thing, all of them have been replicated through hard-button redundant controls. It also renders the Acura TLX‘s silly trackpad setup obsolete. 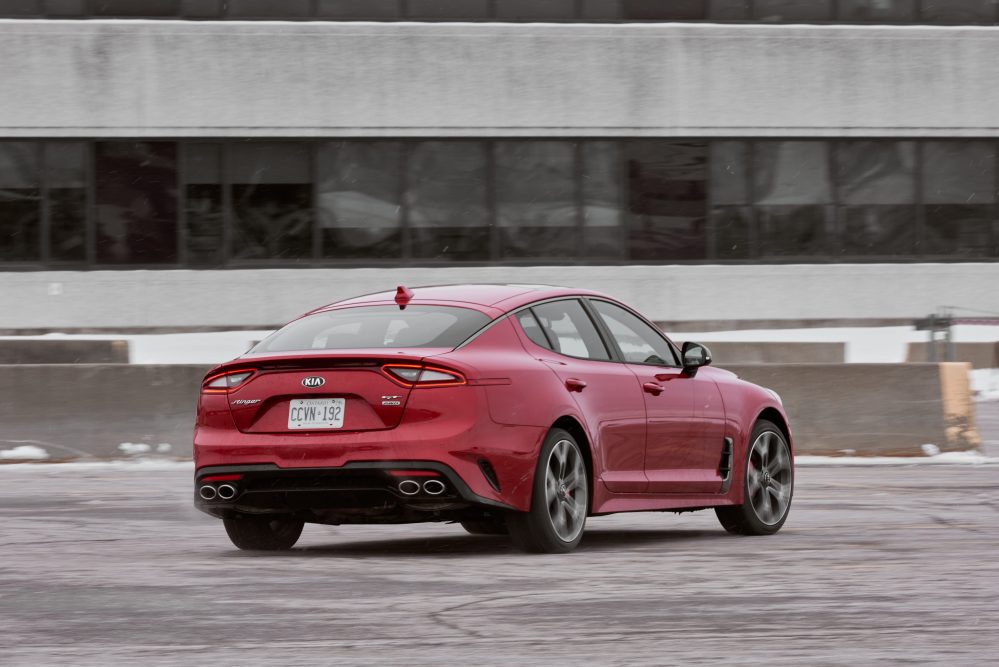 Obviously, reading another review of the 2021 Kia Stinger GT on these pages didn’t reveal anything new. But after driving Lamborghinis, Aston Martins, Hellcats and Bentleys and I still absolutely adore this thing. That says a lot about how well executed the Stinger is. I mean, why even get an Infiniti Q50 or an Acura TLX in the first place? If you can get past the badge, you should definitely consider this thing on your list. Because you’ll be buying one of the better accomplished sport sedans currently on sale. And who knows, if you keep it long enough, it might one day be worth a lofty sum.